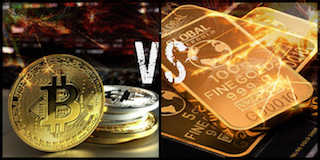 This year’s Vancouver Resource Investment Conference (VRIC) ended with a charged expert debate on cryptocurrencies vs. gold.
Moderated by Marin Katusa of Katusa Research, the panel featured Jim Rickards and Peter Schiff supporting gold and Teeka Tiwari on the side of cryptocurrencies.
Rickards, who’s a bestselling author and chief global strategist at Meraglim, kicked the talk off by calling it a “phoney debate” because there is “one and only one gold,” created at the beginning of the universe.


Give me my free report!
In contrast, there are over 1,000 cryptocurrencies, “which are amorphous, ill defined [and] with many variations among them.” Rickards added that bitcoin is interesting because “it is a fraud, a ponzi and a bubble all at the same time,” pointing to exchange crashes and price action by the “whales” — the name he gives the thousand or so holders that control some 40 percent of bitcoin.
Rickards said these whales “have a huge vested interest in keeping the price of bitcoin up” by selling to each other at increasingly higher prices. As prices rise and bitcoin gains media attention, “suckers” are drawn in. He also said that the whales are “using futures to hedge their positions,” along with options trading, both of which are “forms of fraud.”
Tiwari, who’s editor of the Palm Beach Letter, agreed that Rickards’ arguments are valid. However, he said that bitcoin is great at “securing enormous amounts of value,” and cryptocurrencies give people self-sovereignty over their wealth for the first time in history. Tiwari acknowledged that there were bitcoin flash crashes in the early days, and “ethereum last year went from $400 to almost 10 cents before going back to $400. You do not want to put your life savings into that.”
He said investors should “be rational” and take a small position in the space, noting that cryptocurrencies are transparent because “you can see every single trade on the blockchain. You can’t do that in the stock market.” He also pointed out that fraud can occur in the stock market. In his opinion, those getting into the cryptocurrencies space need to do their homework, but he emphasized, “I love bitcoin. I think bitcoin will go up to probably $40,000 or $50,000 this year,” based on the recent launch of the Lightning Network.
Schiff, who runs Euro Pacific Capital, countered that the only opportunity in bitcoin is to sell. He said cryptocurrencies are not like stocks, which generate earnings and pay a dividend or use earnings to buy back shares. “You don’t need a buyer to make money if you’re the owner of a company. The company makes money for itself. The exchange simply provides liquidity for your asset,” he said.


Give me my free report!
In contrast, “bitcoin doesn’t have these future earnings. It doesn’t earn anything,” Schiff said, adding that bitcoin is also not a commodity like gold. Schiff, who also serves as an investor and advisor at gold-based financial services firm Goldmoney, said Goldmoney will best serve the cryptocurrencies community by “giving people who have cryptocurrencies an easy way to turn it into actual money.”
Tiwari said that much of the value in the world now is digital. “You have this binary argument that gold is great, bitcoin is crap. The truth is there’s a middle ground there.” Schiff said the price of bitcoin can go up as long as there are buyers, but “eventually the buyers are going to go away and it’s going to collapse.”
For his part, Tiwari said that every single asset class goes through a boom and bust cycle, with Schiff interjecting that “they don’t bust to zero.” That’s because other assets, such as real estate and gold, have inherent value while bitcoin, he believes, does not.
Katusa interjected to ask Rickards if he believes in blockchain. Rickards said he believes blockchain is “here to stay” because ledgers are useful and the technology will evolve — but “bitcoin will die out.” Schiff agreed that blockchain “can certainly be used. Maybe companies can issue stock and you can trade it without an exchange.” Many industries may be able to use the blockchain, unlike bitcoin and other cryptocurrencies, because “the token itself has no value.”
Tiwari said businesses are being built on the ethereum network, with a million transactions taking place per day, and “that’s not zero value … people are buying computational power on the ethereum network with the ether token.” Tiwari said a better version of ethereum with better smart contracting language will draw a migration over to that token. Rickards added that when the ether holders migrate, “it will go to zero and something else will go up.” Schiff said “bitcoin year-to-date has been a lousy investment,” although he acknowledged that other cryptocurrencies have gained in value.


Give me my free report!
Katusa asked Rickards if the Chicago Mercantile Exchange’s launch of bitcoin futures trading in December legitimizes the cryptocurrency world, and Rickards said “it doesn’t validate anything. It has nothing to do with bitcoin. [The exchanges] will trade anything they want to trade.” On the topic of crypto ETFs, Tiwari added that “it’s going to be awhile until a bitcoin ETF comes around. I do think we’ll eventually get one.” The US Securities and Exchange Commission has been reluctant so far, but has not said a hard “no” to the idea.
On the topic of youth enthusiasm for cryptocurrencies, Rickards said a lot of kids have grown up playing video games like World of Warcraft, where they pay real dollars to acquire more weapons in the game. “That’s impressionable pre-teens forking over real money with their parents’ credit cards to buy virtual currency — so when bitcoin comes along it seems perfectly natural to them.”
However, Rickards said cryptocurrencies are not libertarian because “you’re at the mercy of the miners,” and governments are calling for regulation. He mused that the vast majority of people have not declared their bitcoin profits on their taxes, and “a lot of these bitcoin holders are going to end up in jail.” Tiwari said he tells people to pay their taxes, but added that bitcoin can’t be shut down. “China shut down all the mining, has shut down all the exchanges — and guess what happened? All the mining moved and all the exchanges moved and bitcoin went from $3,000 to $20,000.”
The discussion moved to tether, a coin backed by the US dollar. Tiwari called tether “a complete ponzi, and I tell people don’t use tether.” Rickards said he expects the government to “basically arrest the sponsors of tether if they don’t collapse sooner for counterfeiting,” because it threatens the US Federal Reserve’s control of the money supply. In response to a question from the audience asking what he thinks of Hashgraph, Tiwari called it a “very interesting technology.” Tiwari said Hashgraph uses patented closed-loop technology, and he believes that open source will be the leader. “If Hashgraph went open source, I think it would be a serious contender.”
A show of hands from the audience revealed that most preferred gold over cryptocurrencies. Katusa reached out to Doug Casey of Casey Research in the audience to ask whether he would bet on gold or bitcoin over the next 12 months. “At this point gold,” Casey said.
Don’t forget to follow us @INN_Resource for real-time news updates!
Securities Disclosure: I, Melissa Shaw, hold no direct investment interest in any company mentioned in this article.

2 responses to “Experts Get Heated at Cryptos vs. Gold Debate in Vancouver”