The history of Colombia is marred by the illegal drug trade, violence and rebel groups. Gold Investing News spoke with Chris Berry of House Mountain Partners about the risks of investing in Colombia, and the changes the pro-business government is making to secure the country, attract foreign investment and grow the Colombian economy. 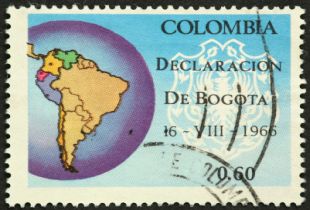 Investing in mining companies with projects in Colombia may seem a risky proposal to an outsider. The long history of the country is marred with violence, narcotics trafficking by the notorious Pablo Escobar and the operations of the Revolutionary Armed Forces of Colombia (FARC).

However, efforts by the former Alvaro Uribe and the current Juan Manuel Santos administrations have curtailed the size, scope and impact of such nefarious elements in the country. A pro-business mentality on behalf of the government has brought in a new wave of foreign investment into the country.

Colombia is a resource-based economy, and while unemployment and poverty is high compared with some in the region, the influx of foreign investment may raise the standard of living in the country. Gold production has risen substantially from 15,400 kilograms to 47,800 kilograms according to the United States Geological Survey. Colombia’s main resources are coal, oil, gold, and nickel.

In an exclusive interview with Gold Investing News, Chris Berry, founder of House Mountain Partners, spoke about the factors at play and the risk of investing in Colombia.

Neighboring countries, namely Venezuela and Bolivia, have shown resistance to foreign investment. Colombia has tried to differentiate itself from other nations in the region. “Foreign Investment is looked upon favorably in Colombia. Columbia is predominantly a commodity based economy, so with gold at $1400 an ounce and silver at $35 the Colombian government has focused on welcoming in direct foreign investment in the mining sector. Seeing that the deposits currently being explored in the country are ultimately developed and put into production is the key for future economic growth and political stability,” stated Chris Berry.

Most investors may be scared off by the history of violence and narcotics’ trafficking that has destabilized the country in the past, but these trends have been changing. The main person responsible for helping to clean up Colombia’s tarnished image was former President Alvaro Uribe. “President Uribe came into office on a pro-business platform in 2002, and he realized that the fate of his country revolves around the ability to attract foreign investment and develop industry. He took on the narco-traffickers and FARC, and I think one of his smartest moves was to appoint Juan Manuel Santos as his Defense Minister,” stated Berry. Adding, “Santos was the individual widely credited with taking on the criminal elements in the country side, and pushing them out.”

This is not to say that the coca trade and the FARC have been eliminated or do not still pose a threat, however, as Chris Berry stated, “they have been greatly diminished.” Under the Uribe government, the homicides and kidnapping that had been a persistent problem in Colombia were greatly curtailed. Earlier this month, 23 workers for Talisman Energy (NYSE:TLM) (TSX:TLM) were kidnapped. The government acted quickly and within one day 22 of the workers were freed, with reports that the 23rd hostage had escaped.

In the wake of the recent kidnappings, President Juan Manuel Santos recently stated that foreign companies that pay ransom money to groups will be kicked out of the country. “I want to give a very clear warning: businesses that pay a single peso to one of these bandits will be leaving the country . . . We cannot permit anybody, anybody to nourish these bandits, who will only use the money to produce more violence and more insecurity,” stated President Santos at a public event.

The influx of investments into the country, and an increase of economic growth outside of illegal drug operations and illegal mining, will hopefully limit the influence of FARC.  “With respect to just the gold industry alone, around $400 million was spent in 2010 by foreign gold exploration and production companies. And that’s the type of investment that leads to increased tax revenue and royalties, and ultimately adds to the quality of life for the average Colombian citizen.” As quality of life standards increase, added pressure is put on criminal elements such as FARC, as they are seen as pariahs. This in turn adds security to foreign investments as the threat of kidnappings is further diminished.

The pro-business attitude of the government is a positive factor to investing in Colombia, as opposed to other countries in the region. “This is one of the reasons why foreign companies want to be in Colombia. There is a high degree of transparency in the policies, or companies wouldn’t take the risk,” added Berry. The Fraser Institute conducted a survey of petroleum executives and rated Colombia higher than Venezuela, Bolivia and Ecuador in terms of willingness to invest due to political stability and regulatory uncertainty.

The royalty and tax scheme in Colombia changed in 2001, under what some have said is the auspices of the Canadian International Development Agency, from 10 percent down to 0.4 percent. Mines and Energy Minister Carlos Noriega stated at the PDAC Conference in Toronto that the government has no plan to change the mining royalty scheme in the short term. Corporate taxes, 17.7 percent, are slightly lower than the average Latin American countries in the region, and less than OECD countries according to The World Bank.

There has been some backlash from environmental groups in response to Greystar Resources‘ (TSX:GSL) plans for an open pit gold mine. This is not because of the open pit method of mining, but because of the Alpine Meadows Regulations that ban operations above 3,000 meters. “Many companies clearly state that they are below the threshold, which assuages investor fears of not seeing a deposit move towards development,” stated Berry. In considering investment in companies with deposits in the country it is wise to consider the elevation of the deposit.

Infrastructure is key to the profitability of an operation. Roads and the proximity of power lines can weigh heavily on the economics of a project. Chis Berry shared his insights on the modernity of Colombian infrastructure. “I was recently down in Medellin, Colombia in October. The infrastructure is sound and stable; the roads are mostly paved. One of the caveats was the recent rainy season, which caused mudslides and occasional road closures, but I don’t have any second thoughts about the infrastructure at all.” The country ranks well in terms of transportation and electrical production in the world according to the CIA World Factbook, better than most other South American nations.

The unemployment and poverty rates are high compared with Peru, and Chile. “What better way to establish positive relationships with the local population than by proving you have a stake in the growth of the community and offering training and jobs to the Colombian citizens, providing their families with a paycheck and steady job,” stated Berry. These factors, when mining is conducted in a responsible fashion, socially and environmentally strengthen ties to the government, and reduces the influence of rebel groups.

There are risks to multi-national companies looking to start operations in Colombia and to overlook this reality is shortsighted. However, the attitude of the government towards foreign investment, and their willingness to combat the illegal elements of the country is changing the nature of doing business in Colombia. The growth rate in the country is healthy, at around 4 percent to 5 percent, and should continue in the medium term thanks to increased investment in the country. The government has stated its desire to keep taxes and royalties low, and their hard stance towards FARC shows that they are seizing the opportunity to grow their economy responsibly.