Now that the gold frenzy is cooling down, some may be looking at their bills for storing the metal wondering if anything can be done. 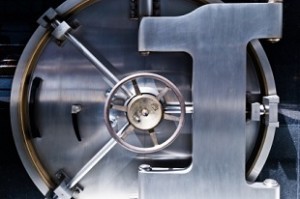 A result of this year’s gold frenzy was that it pushed up storage costs. Now that safe haven gold buying has calmed, it is likely that some investors may start raising their eyebrows at the costs of protecting their assets.

Before this year, clients may have been paying annual rates of .03 to .15 percent of the value of their gold to store it. Those who tucked their metal away in 2011 may be paying a full 1 percent. In many cases, investors may not even realize how substantially prices have spiked because they are new to the market.

Ten years ago, people bought gold and kept it in their homes because it wasn’t worth much. Then, the prices starting skyrocketing and fear of loss or security risks sent them out looking for professional safe keeping, said Mike Clark, President and General Manager of Diamond State Depository.

When asked whether storage facilities are merely cashing in on the trend or if higher prices were justified, Clark revealed that it was likely a bit of both.

“There are only so many depositories,” he said. “If there is a big demand for a small product, prices go up.”

Those may be the fundamentals of business, but the surge in gold investing did produce real effects, such as space constraints.

In addition to new investors, there are longtime individual and institutional clients who expanded their portfolios who needed storage facilities for their metals. Furthermore, massive storage were also required for physically backed exchange traded products (ETPs). A benefit of investing in an ETP is that individuals do not have to worry about handling the metal they own, but it must still be housed on their behalf.

In the latter half of last year, JP Morgan & Chase opened a precious metals storage facility at Changi International Airport. As of September 2011, it was reportedly almost full. This year, Barclay’s Capital announced plans to build a new vault and others in the precious metals storage business were reported to be considering expansions and new facilities as space became tighter.

Clark said some companies in need of extra space even started renting facilities. He described the increase in demand as unlike anything the industry has seen.

Fees went up, in part, because businesses faced increased costs for additional staff, security, and infrastructural items such as industrial shelving. Also, more insurance was needed. Even if storage facilities hadn’t taken in any new assets, as the value of the metal held rises, the amount of coverage required also rises.

Insurance coverage is a common marketing point for storage facilities. Since it is also a significant part of a company’s overhead, it can notably impact the rates that investors pay. This is one of the areas people may want to consider looking at to cut costs. Some investors are subject to unnecessarily high storage fees because they sought out more insurance coverage than necessary.

Clark said clients often inquire about 100 percent coverage. But, most facilities insure 40 to 60 cents per dollar of value, adding that that is really all that is needed. To insure dollar-for-dollar is not only cost prohibitive, it is unnecessary.

If more investors understood the facilities where their assets are stored, many probably would not pay higher rates for facilities that highlight the highest amount of insurance coverage.

As Clark explained to Gold Investing News, in order to get any sort of insurance policy, a site must essentially have two separate security systems. If the gold is being stored in a warehouse, that building must have a UL-rated security system. Then, the vault within the facility must have a separate multi-tier security system which will include components such as motion and vibration detectors. Not to mention that there is a practical limitation to stealing 100 percent of a vault’s gold– its weight.

Some investors are also wasting money on unnecessary segregation. When gold is segregated, that which belongs to one person is kept apart from that belonging to others. A person with a segregated account gets the exact item he deposits, but he pays more to do so.

Some institutions are forbidden by law or corporate regulation from from allowing assets to be commingled, but for the individual investor it’s often a service that they don’t really need.

Clark pointed to the increase in storage of commonly traded items such as gold American Eagles or Canadian Maple Leafs and said that investors should not be paying extra for segregation of such items.

“Think of a depository as a precious metals bank,” he said. “You don’t go to a bank to get out the exact dollar you put in.”

Another reason that investors are now subject to high storage rates is because many don’t ask for anything else. They just take what they get.

“We do not operate in a vacuum,” Clark said. “If a company or individual investor calls to discuss lower rates, depositories may sometimes negotiate.”

A point for investors to especially consider during periods of sell-offs.