Lignite is a type of coal, but what is lignite used for? Here’s a look at what lignite is, what its applications are and where it’s mined.

What is lignite, and what is it used for? Lignite, a type of coal that is generally yellow to dark brown, is the first product of the coalification process.

That places it between peat and sub-bituminous coal, as per classifications used in the US and Canada.

Lignites are geologically young for coal, having formed anywhere between 251 million years ago and the present. Formed from peat compressed at shallow depths at temperatures below 100 degrees Celsius, or 212 degrees Fahrenheit, lignite beds are easily mined; many are also quite thick.

In terms of availability, Encyclopedia Britannica states that nearly half of the world’s proven coal reserves are made up of lignite and sub-bituminous coal. However, lignite hasn’t been widely exploited because other types of coal are superior to it in terms of handling and storage stability.

That’s because some varieties of lignite contain up to 75 percent water, and when that water is removed from the coal, it crumbles, losing value as a fuel. Lignite is also prone to spontaneous combustion.

Additionally, lignite has a low calorific value, which means that transporting it over any significant distance is uneconomical in comparison to other types of coal. For that reason, though lignite is used in power generation, it is used largely by local utilities and industries close to sites where it is mined.

In fact, the European Association for Coal and Lignite notes that lignite-fired power plants are usually built adjacent to mines. Dedicated infrastructure, most commonly a conveyor belt or similar contrivance, then carries the lignite directly from the mine to the power plant.

Despite those issues, lignite’s low cost of production means there have been calls to increase its use in many countries.

What is lignite used for?

A negligible percentage is used as home heating fuel, as standalone fertilizer and as oil well drilling mud. 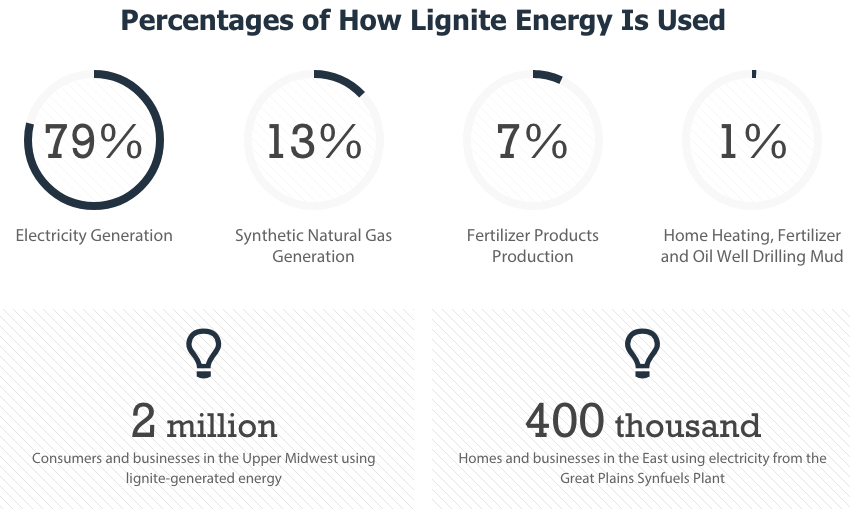 Where is lignite mined?

Germany was again the world’s top lignite producer in 2017, the European Association for Coal and Lignite states. Altogether, the country put out 171.3 million MT of the fuel that year; unsurprisingly, a quarter of its electricity comes from lignite-fired power plants. Trailing behind in second place, Poland produced 61 million MT, while Greece and Romania mined 37.7 and 25.7 million MT, respectively.

The Freedom mine, located in North Dakota in the US, is of great interest in the lignite industry. It is owned by the Coteau Properties Company, a wholly owned subsidiary of North American Coal. Freedom is one of the 12 largest mines in the US and is the country’s largest lignite mine. North American Coal is the top producer of lignite in the US.

Now that you know what lignite is, what it’s used for and where it’s mined, what else would you like to know? Here are some related articles to expand your expertise on coal:

This is an updated version of an article published by the Investing News Network in 2014.

Securities Disclosure: I,  Amanda Kay, hold no direct investment interest in any company mentioned in this article.