Standard Lithium (TSXV:SLL) CEO Robert Mintak outlines the approach Standard Lithium has taken for scaling its lithium extraction technology from bench scale to demonstration plant and how the company is working to scale the technology as it pushes towards production.

Standard Lithium is a technology and project development company focused on bringing large lithium brine resources in the US into production quickly. The company’s flagship LANXESS project is located in Southern Arkansas.

In the interview below, Mintak provides an update on the company’s lithium extraction demonstration plant. Standard Lithium has been developing its proprietary extraction technology, LiSTR, since 2017, and it’s been tested and scaled at each stage of development as the company pushes its project towards production. The demonstration plant is expected to have a flow rate of 50 gallons per minute and is designed to produce between 100 and 150 tonnes of lithium carbonate per year.

Mintak also touches on the reasons why Standard Lithium chose to target the Smackover formation in Arkansas. According to him, the Smackover formation is a world-class resource opportunity, with well-characterized brine chemistry where Standard Lithium can leverage the existing infrastructure of North America’s largest brine processing facilities. Standard Lithium has partnered with global specialty company LANXESS. The pair aims to eventually produce lithium — a key component of electric vehicle batteries — on a mass scale from brine that is a by-product of existing bromine production facilities run by LANXESS in the southern state.

Mintak discusses the company’s upcoming milestones, which include the completion of construction and commissioning of a pre-commercial demonstration-scale lithium extraction plant, a preliminary economic assessment (PEA) and a feasibility study. According to Mintak, the PEA numbers should benefit from the project’s location with access to low-cost chemical reagents, power and water. He expects to release the feasibility study within the first half of 2020.

Below is a transcript of our interview with Standard Lithium CEO Robert Mintak. It has been edited for clarity and brevity. 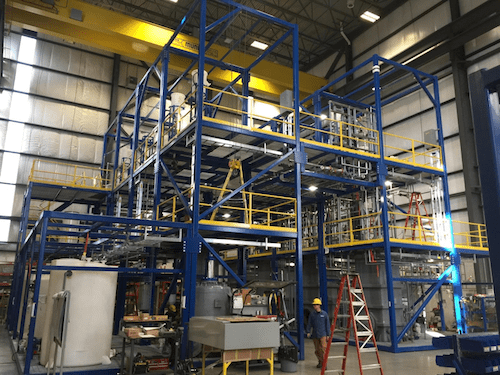 Investing News Network: How has your lithium extraction demonstration plant been progressing?

Standard Lithium CEO Robert Mintak: Progress on the lithium extraction demonstration plant has been impressive. We’ve been very methodical during each stage of development. We began work in 2017 when we began bench- or lab-scale work. We worked with large volumes of real brine from the project and tested a whole range of different technologies to determine which general “suite” of technologies would work best with our brine.

The bench-scale work answered the chemistry question of selectively extracting the lithium from the brine. Direct lithium extraction from the tail brine using a highly selective solid sorbent was the way to go. We then ran two programs of mini pilot work to build our understanding of the process engineering. One of these was done at a batch scale, and we then scaled this up and ran it on a continuous basis. At this stage, the craftsmanship of our team made up of chemical and process engineers from a wide range of disciplines allowed us to develop the simplest flow sheet we could, using equipment and processes already in use at very large commercial scale in complementary existing industries.

The upcoming demonstration pilot plant is expected to be the proof of concept for our project — it is a large demonstration pilot that can be scaled directly to a commercial facility; it’s designed to process up to 50 gallons per minute of tail brine from LANXESS’ South Plant and produce 100 to 150 tonnes of lithium carbonate per year. It will be 100 times larger than the mini pilot plant. Demonstration plants differ from pilot plants in that the process flow sheet much more closely resembles commercial-scale operations so we can show our partners that we can scale our technology at each stage as we push towards commercial production.

Construction on our demonstration plant is about to complete. We expect the plant to be disassembled and begin shipping to the site in early Q3. The plant will be shipped in modules for a total of 18 modules — each 12 feet by 12 feet by 36 feet. They will be reassembled at the site and commissioned over the summer. We’re intending to run the plant continuously into early 2020; this will coincide with launching a feasibility study that is targeted to be completed in the first half of 2020. 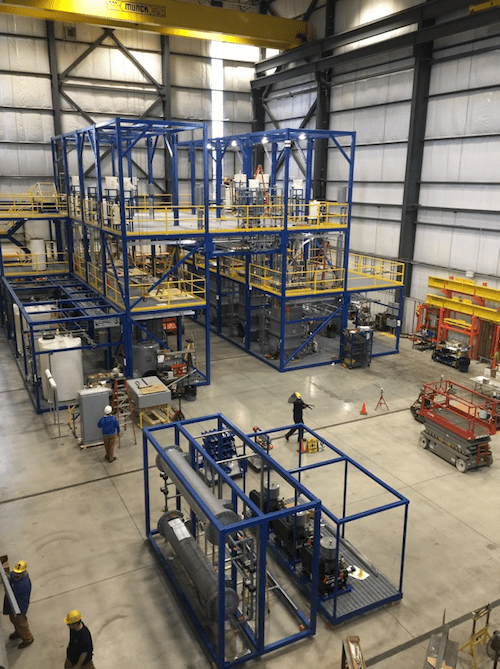 INN: How will this extraction technology be applied at scale?

RM: The great thing about working on this project is that the brine production infrastructure, production and disposal wells, hundreds of miles of pipelines and the related permits are in place. Our project partners, LANXESS, operate three massive brine processing facilities on 150,000 acres of leases. A commercial build would include a lithium extraction facility at each LANXESS plant connected to the waste or tail brine pipeline before re-injection and a central crystallizer plant for the production of lithium carbonate. The target is a combined total of 20,000 tonnes of lithium carbonate equivalent from the existing brine flow, that is without having to drill a new well. LANXESS currently produces roughly 6 billion gallons of brine annually.

INN: What first attracted Standard Lithium to the Smackover formation?

RM: When we started the company in 2017, we looked at what the other companies were doing, what the industry looked like and where companies had stalled or failed in the past. Across the resource sector, there is an emphasis placed on finding high-grade discoveries that read well in a news release but don’t address all the project killers that usually come with them like zero infrastructure, country risk, permitting, skilled workers and many others. The landscape is littered with high-grade projects that never get built or take huge capital investments and decades to see completion.

We believe that South Arkansas represents a world-class resource opportunity because it’s already by and large permitted for the production and processing of commercial volumes of brine. It has existing infrastructure and a local skilled workforce. Because it is near the gulf coast, chemical reagents are inexpensive and low-cost power is available at 0.05 cents a kilowatt.

We were fortunate to partner with global specialty company LANXESS, who has the largest brine handling operations in North America. We have signed a general term sheet with LANXESS for a planned joint venture for the commercial production of battery-quality lithium compounds; the term sheet includes commitments from LANXESS for project financing. Our next step is to provide LANXESS proof of concept on our extraction technology, and, subject to a positive feasibility study, the goal is a final investment decision by the middle of next year. 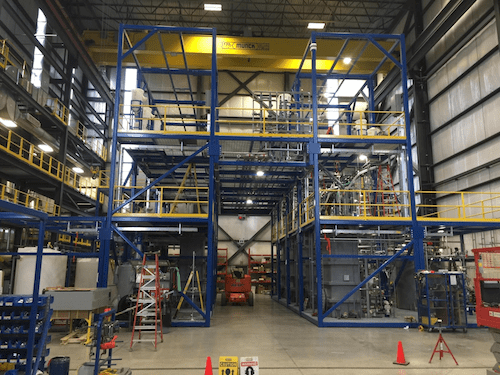 INN: What does the upcoming PEA say about the Southern Arkansas project?

RM: I believe that the PEA will reflect operating costs that are some of the lowest in the world and that significant capital costs are already in the ground. Our partner LANXESS already has dozens of production wells and re-injection wells in place with over 250 miles of pipeline. LANXESS is pumping roughly 20 million gallons a day or 6 billion gallons of brine a year through its system.

INN: What’s next for Standard Lithium?

RM: Over the short term, 30 to 90 days, we expect to release the upcoming PEA. Over the next eight to 12 months, we expect to announce the commissioning of our demonstration plant for proof-of-concept of the extraction technology and final investment decision mid-2020.

The information contained here is for information purposes only and is not to be construed as an offer or solicitation for the sale or purchase of securities. Readers should conduct their own research for all information publicly available concerning the company. Prior to making any investment decision, it is recommended that readers consult directly with Standard Lithium and seek advice from a qualified investment advisor.