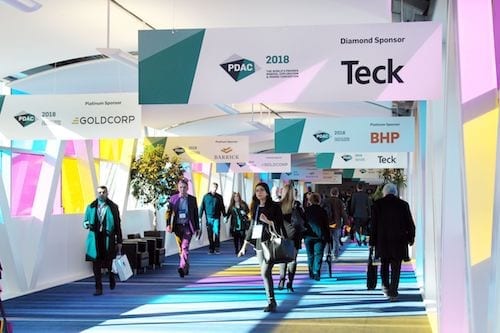 Outgoing PDAC President Glenn Mullan reflects on his time at PDAC and shares details on his conversation with Prime Minister Justin Trudeau.

This year’s Prospectors & Developers Association of Canada (PDAC) convention has now been and gone, and for Glenn Mullan, the organization’s outgoing president, the event was a success.

“Everything has been packed … it’s relentless, it just doesn’t stop,” he said at the end of the show’s third day. “All I can go by is the buzz that I hear and see in the elevators, escalators — very positive.”

Statistics released after the end of the convention show that attendance clocked in at 25,843 this year, up slightly from last year’s 25,606.

“Although we continue to face economic challenges and uncertainty, the mineral exploration and mining industry is experiencing a renaissance and renewed sense of confidence, highlighting its resilience once more,” said Mullan in the release.

PDAC is often described as a bellwether for the year ahead in the resource space, but Mullan said currently it’s too soon to tell what may come next.

“Right now we’ve seen a lot of noise — so it seems like it’s moving up, and then it’s sideways and then it’s down, and it’s back and forth. So right now it’s very noisy, and that’s usually a precursor to something.”

He added, “whether it’s net positive or net negative — it’s a little bit too early to say. But certainly looking at the booths, looking at the exploration programs and the things that have been announced recently, there’s still no hiatus in the gold exploration side.”

One highlight from the convention for Mullan was his fireside chat with Canadian Prime Minister Justin Trudeau. The two spoke in front of a small audience about the country’s resource sector, with the prime minister emphasizing themes including collaboration, reconciliation and innovation.

“We actually talked about the things that matter to our members, like [the] mineral exploration tax credit, community corporations and how they do partnerships, in particular aboriginal. And then some of the things that the government helps us with or needs to help us with more with regulation,” said Mullan.

When asked whether he feels the Canadian government currently gives enough support to the resource industry, Mullan commented, “I don’t think we can ever sit down and say, ‘boy, that’s enough’ or ‘they’re giving us too much’ — I don’t think that day will ever come. but they certainly have listened.”

He continued, “I think one of our biggest challenges in the past decades has been trying to even get a seat in the room, and to try to be heard. And with the mineral exploration tax credit and some of the new legislation they’re showing that we’re being heard.”

In closing, Mullan spoke to the benefits of attending PDAC. “If you’re not at this convention, you’ve got to come to this. There’s nothing in the mining space that’s like the PDAC,” he said.

PDAC will run next year from March 1 to 4. In the meantime, you can read our overviews of day one, day two and day three for this year, or click here for our full playlist on YouTube.

2 responses to “VIDEO — Glenn Mullan: There’s Nothing in the Mining Space Like PDAC”