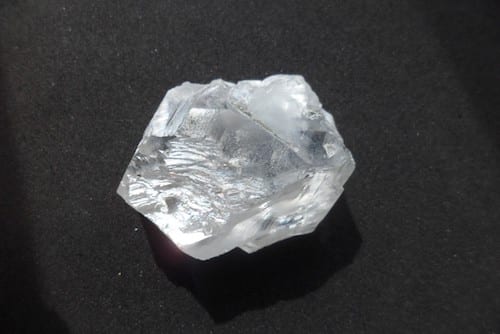 The over 400 carat white type II gem is the largest recovered by Petra this year, and the third-largest stone recovered from the mine to date.

Less than a month after discovering a massive 100.83 carat diamond, Petra Diamonds (LSE:PDL) has recovered an enormous 425.1 carat gem from its Cullinan mine in South Africa.

The white type II gem is the largest recovered by the company this year, and the third-largest stone recovered from the mine to date.

Company shares climbed by as much as 9.46 percent following the announcement of the newly recovered diamond.

In 1905, the Cullinan mine produced the 3,106 carat stone considered to be the largest diamond ever mined. Subsequently, the immense stone was cut into smaller stones, two of which, the Cullinan I and the Cullinan II, were included in the world-famous crown jewels.

Since acquiring the mine in 2008, Petra has made its own remarkable discoveries. Most noteworthy is the 507 carat diamond, called the Cullinan Heritage, that was recovered in 2009.

Despite unearthing the colossal rock roughly a year after obtaining the mine, Petra has had a few rough years recently.

“Petra has kind of had a difficult run the last couple of years, and I think everybody knows that that mine is capable of producing diamonds of this size and quality, so I think it provides a much-needed boost for the company right now.”

While the market for small white stones has been slightly depressed due to slow economic growth in China and the US, the market for large stones, like the one found by Petra, has resisted a downturn.

“[I]t is probably going to be the most valuable diamond to come out of that mine since the … Cullinan Heritage that sold for US$35 million in 2010,” said Zimnisky.

“I think that is going to be comparative — when you adjust the inflation it’s a smaller diamond — but I think it could potentially bring in that US$25 to US$35 million price range, which puts it towards the high end of diamonds sold in the last 10 years.”

After discovering the Cullinan Heritage in 2009, Petra has gone on to recover a 232 carat white diamond, which sold at auction in 2014 for US$15.2 million, as well as several large and extremely rare blue diamonds.

“They also had a 29 carat blue diamond that also came from that mine, I think it sold for almost US$30 million,” added Zimnisky. “I think [the 425 carat diamond was] a much-needed recovery for [the] company and for that mine, given the challenges over the last couple of years.”

Petra plans to sell the 425 carat diamond during Q4 of this year.