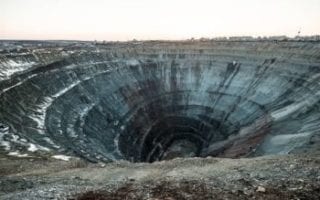 Everyone knows what diamonds are, but do they know where they come from? Here’s a quick peek at kimberlite pipes.

Experts believe that four processes are responsible for creating nearly all the natural diamonds that have been found at or near the surface of the Earth.
The gems can be formed in the Earth’s mantle, in subduction zones, at impact sites and even in space. However, the first process is by far the most common, and it is the only one that can lead to the creation of gem-quality diamonds. The other three are responsible only for the formation of small quantities of commercial diamonds.
Diamonds that originate in the mantle are created when heat and pressure transform carbon. The mantle is nearly 100 miles below the Earth’s surface, and gems that come from there are brought to the surface by kimberlite pipes, which are formed by deep-source volcanic eruptions.
For that reason, diamond exploration companies focus on hunting for kimberlite pipes. Searching often takes years or even decades as only about 1 percent of known kimberlite pipes worldwide contain economic concentrations of diamonds. However, companies that are able to unearth them can go on to find incredible riches. Read on for a quick look at how kimberlite pipes are formed, what they are made of and where they are found.

Kimberlite pipes: How they form

As mentioned, kimberlite pipes are believed to have been formed by deep-source volcanic eruptions. Jeffrey Post, a diamond expert at the Smithsonian, has described these eruptions as “quite violent.”
“We haven’t seen such eruptions in recent times,” he says in a Q&A on diamond formation. “They were probably at a time when the earth was hotter, and that’s probably why those eruptions were more deeply rooted. These eruptions then carried the already-formed diamonds from the upper mantle to the surface of the Earth.”
Indeed, some estimates place the last kimberlite pipe eruption at around 40 million years ago. That has made it tough for experts to determine exactly how they occurred. However, the consensus is that these eruptions happened fairly quickly — their journey from the mantle is estimated to have taken hours, not days or months as is the case with magma and lava from a volcano.
Explaining, Post says, “if [the pipes] were traveling too long and too slowly they would have literally turned into graphite along the way. And so by moving quickly they essentially got locked into place into the diamond structure.”
He adds that the pipes may have moved to the surface at a rate of 20 to 30 miles an hour. Some believe that the only way for magma to rise so quickly is if the melt is supercharged with gas; however, nobody has found out where such gas might come from.

Kimberlite pipes: The role of carbon

Experts are also not sure where the carbon that diamonds form from originates. Geology.com notes that most likely it was “trapped in the Earth’s interior at the time of the planet’s formation.”
Explaining further, Post comments that in some cases it seems like the carbon originated in the mantle, while in others it appears to have come from near the Earth’s surface. In the latter case, the carbon “could have literally been carbon that was part of carbonate sediments or animals, plants, shells, whatever, that was carried down into the upper mantle of the Earth by the plate tectonics mechanism called subduction,” he says.
As is mentioned above, the intense heat and pressure of the mantle combine to transform this carbon into diamonds. Put very simply, each carbon atom bonds to four other carbon atoms, creating a very strong connection; it’s because of this strength that diamonds are so hard. As more carbon atoms come into the vicinity of the bonded carbon atoms, they too attach. Eventually, once enough carbon atoms have attached to one another, diamonds are formed.
Colored diamonds are created when foreign particulates are trapped during the diamond crystallization process. Traces of different material result in different hues, as well as different hue intensities. For example, blue diamonds, which are incredibly valuable, are created when boron is introduced in the diamond formation process — it bonds to the carbon atoms, absorbing the red, yellow and green areas of the color spectrum.

Kimberlite pipes: Where they are located

Kimberlite pipes were first found near Kimberley in South Africa, but since then they have been found on most continents. Of course, as has already been noted, not all kimberlite pipes are created equal and only a small percentage of them contain diamonds.
So where should diamond exploration companies look if they want to find kimberlite pipes that contain diamonds? Major diamond mines can be found in South Africa, Botswana, Angola, Russia, Canada and Australia, so starting there is a good bet.
That said, simply showing up in a country that produces diamonds and hoping for the best is not a sound approach. When a company has found a site that it believes may hold diamonds, one thing it may do is look for minerals that are associated with kimberlite pipes. These minerals include garnet, clinopyroxene, orthopyroxene, olivine, spinel, ilmenite, magnetite, rutile, and zircon.
A member of the garnet family called pyrope is one of the best minerals to find when looking for diamonds. A rare form of pyrope called chrome-pyrope forms under the same temperature and pressure as diamonds, meaning that if it is present there is a good chance that a kimberlite pipe with diamonds in it is nearby.
Companies on the hunt for diamonds have other techniques they use to explore, but in general it takes longer to find diamond deposits than it does to find deposits of resources like gold and silver. It is also usually more expensive, though the payoff can certainly be high in the end. To learn more about the process through which companies find kimberlite pipes containing diamonds, click here.
This is an updated version of an article originally published by the Investing News Network on October 25, 2014.
Don’t forget to follow us @INN_Resource for real-time news updates!
Securities Disclosure: I, Priscila Barrera, hold no direct investment interest in any company mentioned in this article.

11 responses to “Kimberlite Pipes: What They Are and How They're Formed”