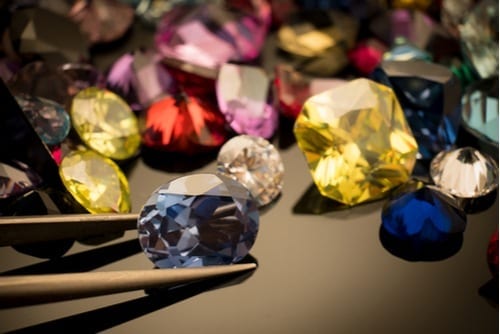 There are few investments that have as wide an array of colors, shapes and sizes as diamonds. Here’s a look at investing in colored diamonds.

There are few investments that come in as wide an array of colors, shapes, sizes and values as diamonds. From small white sparklers to massive rare colored stones, diamonds have captivated us for centuries and will continue to do so for many more.

Some choose to own diamonds for their aesthetic beauty or gift them on Valentine’s Day, while others view white and colored diamonds as an investment and buy them for their investment portfolio.

Diamonds, like their precious metals counterparts gold and silver, are often considered a “rainy day investment” and a signifier of wealth.

As with so many things, when it comes to diamonds the rarer the better, which is why fancy color diamonds in vivid pink, fancy yellow, light blue and intense brown tones are among the most desired gems. They are also among the most expensive, and have been gaining value over the last two decades.

While the market for rough white or colorless gems has been soft for the last year, prices for blue stones grew by roughly 4 percent. However, the market for pinks and yellows was also slightly depressed.

Paul Zimnisky, founder of Paul Zimnisky Diamond Analytics, believes that the price for colored gems in 2018 was heavily impacted by the economic uncertainty of global powerhouses America and China.

“The Chinese stock market crashed,” he told the Investing News Network (INN). “The US had a very weak stock market going into year end, so I think it was more economic factors. But historically, the colored diamond market has been the most resilient across diamond categories. [However,] it seemed like it slowed a little bit towards the end of last and early this year.”

The first quarter of the year traditionally sees some upward momentum from the diamond sector, as Zimnisky pointed out.

“[Usually] you start to see a resurgence in demand because the manufacturers are replenishing their inventory following the holiday season — Christmas and the Chinese New Year are the two biggest holidays — and [we] didn’t see that, I guess, as much as some would have hoped. And I think that’s just because there’s just so much excess supply in the market.”

When INN spoke with Zimnisky in November 2018, he noted the weight the excess diamonds were having on the sector at the time.

“Over the last three years, the two largest producers in the world, De Beers and Alrosa (MCX:ALRS), have been unwinding excess inventory that was built in 2015.”

The slower economic conditions and large reserves have weighed on the sector, but will it correct itself in the near future?

“There were some economic concerns late last year and early this year, so I think some of the buyers of those goods are maybe a little bit hesitant to fully stock up,” he said. “But it seems as if the fundamentals are pointing to a rebound for some of the smaller categories coming into the end of the year.”

While Zimnisky has a cautious approach to market analysis, Russian diamond miner Alrosa is much more confident.

Alrosa, one of the biggest diamond mining companies in the world and the largest diamond producer by volume, anticipates that the market for fancy color diamonds will grow over the coming years, and has invested in expanding its business model over the last decade to reflect this growing market.

“We have our own diamond cutting division — Diamonds Alrosa — which we have been actively developing since last year by focusing on unique gems,” Evgeny Agureev, member of the management board and director of the united sales organization at Alrosa, told INN.

“Currently, our enterprise is equipped at a state-of-the-art level, and colored diamonds are one of its major activities.”

In an early 2019 exhibition, the Russian miner unveiled the largest vivid pink diamond the company has ever discovered — a 14.83 carat rose-toned oval diamond.

“The gem it was cut from was mined in 2017 at the Ebelyakh deposit in Yakutia, and became the largest pink rough diamond ever mined in Russia,” explained Agureev. “In 2017, the National Jeweler magazine rated it as the best discovery of the year.”

Accompanying the remarkable pink gem on display was an equally impressive intense yellow stone that set its own national record. The largest stone in the exhibition, it is a deep fancy yellow asscher cut diamond, weighing 20.69 carats. It was cut from a rough crystal with a rare honey hue that weighed 34.17 carats, and was the largest yellow diamond mined in Russia in 2017.

Diamonds have long been considered a safe investment likely to appreciate in value over time, and that is especially true of vibrant fancy color diamonds.

“Given their exceptional rarity — on average, there is only one color diamond per 10,000 diamonds of jewelry quality — colored diamonds can be considered as a solid object for investment,” explained Agureev.

“Indeed, the global demand for colored diamonds has been growing steadily for many years and we hope that the positive dynamics will continue in the future.”

The increasing value of intense colored gems, also known as investment-grade diamonds, is evident in the volume of sales by leading auction houses like Sotheby’s. Between 2006 and 2016, the volume of sales rose more than sevenfold; the price of jewelry featuring fancy hued tones grew 2.5 times.

As mentioned, diamonds in colored hues are extremely rare. However, there is one type that is considered more rare that others — orange diamonds. In fact, natural orange diamonds are so scarce the Gemological Institute of America seldomly ever grades a stone as being pure orange.

The most expensive stone ever sold was a 14.82 carat fancy orange diamond that sold for US$35,540,612, setting a record for the most money paid per carat at US$2.4 million.

“Every year, the price of colored diamonds grows on average by 12 percent, significantly outstripping the growth rates of prices for conventional diamonds, and many commodities,” Agureev said. “The exquisite beauty and rarity of colored diamonds is driving a surge in demand. The customers’ interest in rare blue, pink, green or purple tones is guided by a desire for scarcity, and a passion for the exotic.”

While Alrosa is very optimistic about its future and that of the sector as a whole, forecasting growth in the year ahead and beyond, the Russian diamond miner does point to the emerging lab-grown diamond market as a place where significant disruption may occur.

Unlike natural diamonds, which are extracted from diamond mines, synthetic or lab-grown diamonds are man made and are less likely to become investment diamonds, despite being made in an array of colors.

For Zimnisky, it’s still too early to tell the long-term effects synthetic stones will have on the mined diamond sector, if any.

“The lab-grown has certainly been the most popular topic of conversation,” Zimnisky said. “The actual impact on natural diamond prices [has] been relatively small. You have to remind yourself  that we’re still at the very early stages of this.”

The diamond analyst believes there simply aren’t enough lab-grown diamonds yet to impede the traditional market.

“The supply relative to the supply of natural [diamonds] is still very small if you look in relative terms. I would say the actual sentiment has probably had a greater impact than the actual supply,” he explained.

The emergence of more lab-grown diamond attention coincides with prices for the manmade stones coming down considerably. In 2008, it cost roughly US$4,000 to produce 1 carat of synthetic diamond, compared to the US$300 to US$500 per carat it costs today.

That is one of the many areas that sets mined and manmade gems apart; traditional stones steadily gain value, while synthetics become more affordable as the technology improves.

For a sector that prides itself on exclusivity and rareness, the threat posed by lab-grown gems is their ability to go unrecognized by an untrained eye.

Agureev and Alrosa foresee the mined sector making strides in the identification and marking of synthetic stones.

“If the natural diamond industry can differentiate its stones from lab-grown diamonds, the effect on natural diamond demand by 2030 will be limited up to 5 to 10 percent in value terms,” he said.

Click here for part two in our Diamonds: A Beautiful Investment series, in which we take a closer look at the lab-grown diamond industry, the impending closure of the Argyle diamond mine where fancy vivid pink, red and orange diamonds are mined and the future of the diamond industry.