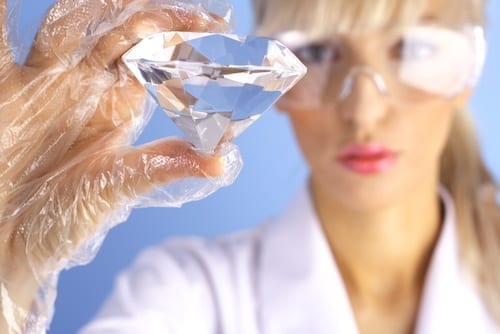 INN explores the lab-grown diamond market, focusing on the technology being used to distinguish the manmade gems from traditional diamonds.

In part one of our diamond investment series, we looked at the colored diamond market and its performance over the last year.

In part two, we will explore the growing lab-grown diamond market, the technology being used to distinguish the manmade gems from traditionally grown diamonds and other diamond transparency innovations being introduced in the sector.

Despite modest gains in the colored diamond market during 2018, the diamond story of the year was growth in the synthetic diamond sector, and the introduction of De Beers subsidiary Lightbox Jewelry, the first major laboratory-grown diamond jewelry company to hit the market.

With muted pink, blue and white toned offerings, Lightbox’s synthetic stones retail for US$800 per carat, not including settings and other fees, offering an affordable alternative to vivid pink, fancy blue and other rare diamonds that are extremely expensive, often outside the price range of the general public.

Unlike traditional natural diamonds, which grow over millions of years and are mined from the Earth, manufactured diamonds are grown in a laboratory under very specific conditions. The most popular and widely used process is chemical vapor deposition (CVD).

In this process, diamonds are created inside a vacuum chamber, where a chemical reaction releases pure carbon atoms that precipitate on diamond seed plates. The CVD diamond quickly grows in roughly 10 to 12 weeks.

Investing in synthetic diamonds: A tale of two buyers

While exquisite and unique natural colored diamonds make up 95 percent of the current colored diamond sector, the rapid growth of the synthetic diamond market is carving out a solid niche.

The market share for unmined gems, which is roughly 3 percent now, is expected to climb to 7 percent over the next decade.

Diamond analyst Paul Zimnisky estimates that the market for lab-grown diamonds will grow from US$1.9 billion in 2018 to US$15 billion by 2035, driven largely by accessibility and affordability.

As Zimnisky noted when he spoke with the Investing News Network (INN), “(The lab-grown diamond market) is more about the middle income consumer in the US, Canada, buying a US$3,000 to US$5,000 dollar engagement ring. ‘Do you buy a 1 carat natural or do you buy a 1.5 carat synthetic?’ And that’s kind of where we are right now.”

He continued, “But again, we’re kind of still in that transition phase, where there is still some intrigue. But I think when you start to see the price of the lab-created get below US$1,000, pretty much across the board, it’s a completely different purchase.”

De Beers is currently one of the few large-scale diamond miners that has a synthetic diamond subsidiary. However, other diamond majors like Russia’s Alrosa (MCX:ALRS) are closely watching the sector and the monitoring its disruption.

“Nowadays in Russia, a number of private and public institutions are very well advanced in terms of cost optimization and technology of growing diamonds,” Evgeny Agureev, a member of Alrosa’s management board and director of the company’s united sales organization, told INN.

“This includes the unique color characteristics. Those companies have close partnerships with foreign markets. Alrosa constantly communicates with them for a detailed understanding of the current state and prospects of this market.”

The diamond company has no plans to enter the synthetic diamond space; however, it is involved in developing sector-wide tools and techniques to distinguish, identify, detect and differentiate lab-grown diamonds from real diamonds.

“Alrosa, as a diamond producer and one of the founders of the Diamond Producers Association, hopes that this initiative will serve to differentiate diamonds and synthetic stones and emphasize the status of synthetics as a separate niche and a low-cost product,” explained Agureev.

“However, there is no denying the possibility that this will increase the demand for synthetic stones and create a risk of devaluation of the concept of a diamond, especially in categories of small cheap stones. Without a doubt, the industry will have to differentiate the positioning of natural diamonds and synthetics,” he added.

Distinguishing lab-grown diamonds from mined diamonds is increasingly important as production of synthetic diamonds grows. In recent years, there have been a handful of instances when jewelers have passed lab-grown diamonds off as their more expensive and rarer counterparts.

These scandals have prompted the industry to work at developing sector-wide standards and tools to easily identify one stone from the other. Educating diamond buyers and the public will also play an important role in creating transparency.

“There’s actually some pretty healthy competition,” he said. “I think everybody understands that (number one) there’s demand for products like this; and number two, I think for the future health of the industry, everybody understands the importance of having technology that’s reliable but also affordable. So everybody in the industry can kind of have a diamond screener in their offices and then in their store.”

How manmade diamonds are described is also an issue that has been raised by the diamond sector. In early 2019, the US Federal Trade Commission (FTC) issued strict warnings to lab-grown diamond producers about using unclear wording to deceive consumers.

“The letters caution them not to use the name of any precious stone, including diamonds, to describe a simulated or lab-created stone, unless the name is immediately proceeded by a clear and conspicuous disclosure that the product is not a mined stone,” states an FTC press release.

“The staff also encourages companies selling simulated diamonds to avoid describing their products in a way that may falsely imply that they have the same optical, physical, and chemical properties of mined diamonds,” the release says.

The FTC also warned manmade gem producers about marketing their stones as eco-friendly, environmentally conscious or green — a growing trend among some of the smaller retailers looking to appeal to the eco-conscious consumer.

“Sellers must have a reasonable basis for making such claims for any products and the claims should be adequately qualified to avoid deception,” reads the letter. “The letters admonish the companies not to use unqualified claims such as ‘eco-friendly,’ ‘eco-conscious,’ or ‘sustainable,’ as it is highly unlikely that they can substantiate all reasonable interpretations of these claims.”

Technology is also being used to offer widespread transparency in the real diamond sector, as miners, producers and sellers all work to prove their gems don’t come from areas known for conflict and blood diamonds.

Zmnisky credited the diamond sector for working to implement tools and processes that allow consumers to track and review the history of the stones they are purchasing.

He also pointed to De Beers’ recent announcement that it will allow its diamonds to be sold as DTC origin. That means “it came from one of De Beers’ mines. Even though they aren’t going to disclose what mine it came from, they’re going to basically say, ‘You could sell it as De Beers diamond. Therefore, you know it doesn’t come from an illicit source.’”

Earlier this year, Tiffany’s (NYSE:TIF), one of the world’s premier jewelers, decided it would provide the provenance for its diamonds weighing 0.18 carats and more.

“Diamonds, formed up to 3 billion years ago and brought to the earth’s surface by a miracle of nature, are symbols of the most important moments in our lives. There should be nothing opaque about Tiffany diamonds,” reads the press release. “Our clients want and deserve to know where their most valuable, most cherished diamond jewelry is from, and how it came to be.”

The ability for buyers to know the history and tell the story of their jewels will be a factor in differentiating the market and buyers of real diamonds.

“What separates the natural diamond from a synthetic is being able to provide that provenance in the store,” said Zimnisky. “And I think there is value with that and it seems like it’s finally coming together. So I think it’s kind of an exciting time to for the industry in that regard.”

Russian diamond miner Alrosa also sees value in allowing the stones to speak for themselves. In mid-October 2018, the company began piloting the M2M Program, developed by the GIA.

The unique initiative allows the retailer and, most importantly, the consumer to trace the journey of a diamond.“(This adds) to its story at each point along the value chain. The M2M program allows for the individual characteristics of a polished stone, and its unique journey, to be shared with consumers using a mobile application, together with traditional diamond grading reports.”

For Alrosa, offering tools and technologies that build confidence for buyers is important for business.

“The creation of tracing systems is an important step in confirming diamond provenance, which will have benefits for industry participants, retailers and ultimately retail consumers,” explained Agureev. “Alrosa is examining different tracing solutions available on the market to provide consumers with supreme confidence and knowledge.”

Apart from being used in jewelry, lab-created diamonds can be used for a number of industrial applications due to their strength and thermal conductivity properties, which are four times that of copper. Lab diamonds also have the widest spectral band of any material, making them ideal for lasers.

Stay tuned for the final part of our diamond series, we will look at the impact the closure of Australia’s Argyle mine will have on the sector, and where the market is expected to go in the coming years as more mines go offline.