The Olympic Dam promises to be a considerable asset for Australian energy resources. It is considered to be the world’s largest uranium deposit and the enormous scale of the expansion ambitions are revealed in the SEIS which estimates that BHP will spend $30 billion to access the resource. 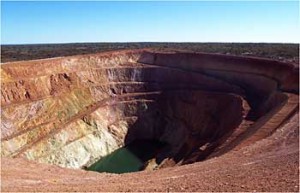 On Friday, BHP Billiton (NYSE:BHP) released its Supplementary Environmental Impact Statement (SEIS) for a significant expansion of its existing mining and processing operation at Olympic Dam in northern South Australia. The stringent Australian government approvals process required the company to submit the SEIS for review by the Australian, South Australian and Northern Territory Governments early last December. Following a series of adequacy checks on the SEIS, the governments granted permission to publicly release the document.

Olympic Dam promises to be a considerable asset for Australian energy resources joining the North West Shelf gas shelf and Queensland gas and coal basins as a source of great future national wealth.  It is considered to be the world’s largest uranium deposit and the enormous scale of the expansion ambitions are revealed in the SEIS which estimates that BHP will spend $30 billion to access the resource. The shape of the enormous deposit is described as a frying pan, with the current underground mine taking ore from the “handle” and the planned open pit mining taking place on what is the “pan” of the ore body.

The handle of the deposit was discovered by Western Mining Corporation; however, the asset was sold before the scope of the pan was known. Low cost acquisition has historically been a prime catalyst for BHP growth with the company acquiring its Mount Newman iron ore from CSR and others and Chilean coal and copper from Utah.

The president of BHP’s uranium business unit, Dean Dalla Valle, indicates that the quantitative estimates in the environmental statement are based on a 40-year Olympic Dam life, although the pan in fact has a 100 year life.  The extensive expansion will involve a preliminary six years of development to remove the overburden to access the pan.  Upon completion this would remove the 350 meter thick zone of overburden and the rock taken out would be transported to a rock storage facility that covers 6,720 hectares and will eventually reach the height of 150 meters.  By 2050, when the mine has not even completed half of its anticipated project life, the pit will be an estimated 3.5 kilometers wide, 4.1 kilometers long and one kilometer deep.

While BHP is removing the overburden and after the open cut starts it will continue to exploit the existing underground mine. At full capacity the company expects to produce a total of 19,000 tonnes, including 15,000 tonnes from the open pit and 4,000 tonnes from the underground mine becoming the world’s biggest uranium supplier. Mr. Dalla Valle says that, despite the forecasted 19,000 tonne Olympic Dam uranium output, his present estimates indicate a considerable global shortfall of 50,721 tonnes of uranium on the basis of current and projected output.  The impending shortfall could result in uranium prices increasing substantially by the end of this decade, coinciding with when the open pit mine begins ramping up its operation.

A critical revenue source during the development years will be from copper production with most recent estimates equivalent to 515,000 tonnes of copper per year. At present the ore being extracted from underground is converted to copper metal and there was pressure on BHP to do the same with open pit ore; however, the company has opted for a copper concentrate that includes uranium, gold and silver, which will be transported by railway via Alice Springs to Darwin. The tailings from producing the concentrate will be rich in uranium but also include copper, gold and silver. The uranium will be extracted from the tailings by employing a hydrometallurgical plant along with a desalination plant and further support facilities.

Last Friday, the weekly uranium spot price closed at $57.00 per pound.  Trade tech reported 8 transactions during the week with a range of spot market uranium prices increasing $1.00 per pound above those concluded at the beginning of the week. The increase in the price for recent transactions was attributed primarily to rumors that a supplier had reached an agreement for the purchase of a considerable quantity of approximately 2,000 tonnes of uranium being transferred by the US Department of Energy (DOE) under a Secretarial Determination issued on March 2. The Secretarial Determination authorized the uranium transfers to fund accelerated cleanup activities at the Portsmouth enrichment facility in Piketon, Ohio, through the third quarter of calendar year 2013. The market responded to the rumors that such a large block of material had been removed as potential lack of inventory. In turn, buyers exhibited a willingness to pay higher prices in order to secure material.