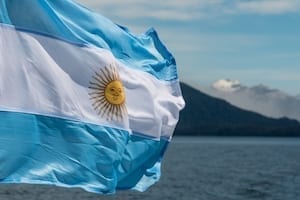 To fuel its growing nuclear industry and push toward clean energy, Argentina is open to the development of near-surface uranium deposits.

Argentina has the most advanced nuclear energy industry in South America, with three nuclear reactors and at least two more on the way in 2018.

Argentine President Mauricio Macri, who is mandating a push toward clean energy, announced in May 2016 that the government is looking to increase the position of nuclear power in the country’s energy mix from 5 percent to 20 percent by 2025.

But with no readily available domestic uranium supply and the high cost of imports, how can Argentina meet its mandate? One good answer to this dilemma can be found in sandstone and surficial-type uranium deposits, which offer the potential for near-surface, low-cost development and production along with economically important vanadium as a co-product.

Blue Sky Uranium (TSXV:BSK; OTC Grey:BKUCF) is focused on acquiring, exploring and advancing a portfolio of surficial uranium properties in Argentina. The company currently has more than a combined 5,000 square kilometers of uranium tenements in the provinces of Rio Negro and Chubut.Send me an Investor Kit

What are sandstone and surficial uranium deposits?

Uranium occurs in a wide variety of geological environments worldwide, and the International Atomic Energy Agency (IAEA) has identified 15 major deposit types based on those differing environments.

Surficial uranium deposits are near-surface uranium concentrations in sediments or soils. Calcrete-type (calcium and magnesium carbonates) are the largest subtype of surficial deposits, and usually form in regions where deeply weathered, uranium-rich granites or sandstones (as well as remobilization of previously formed uranium deposits) occur in a semi-arid to arid climate in valley-fill sediments along tertiary drainage channels and in playa lake sediments. The uranium mineralization is usually carnotite — hydrated potassium uranium vanadium oxide, according to the IAEA.

Where are they found?

“Sandstone uranium deposits are generally found in continental or marginal marine sedimentary rocks, and in basins related to volcanism. Uranium can be associated to copper and vanadium in sandstone deposits, and in some cases close to oil– and gas-producing terrains,” said Guillermo Pensado, vice president of exploration and development at Blue Sky Uranium (TSXV:BSK). He cited examples such as the Powder River Basin of Wyoming, US; the Coastal Plain of Texas, US; the Chu-Sarysu and Syrdarya basins of Kazakhstan; and the Neuquen basin in Argentina.

There are five subtypes of sandstone deposits. Sandstone deposits related to redox fronts, or fronts where the oxidation state of the minerals change by an agent, can be huge deposits if the redox front is related to regional or big-scale boundaries. Cameco’s (TSX:CCO,NYSE:CCJ) Inkai deposit in Kazakhstan is a good example where the proven and probable reserves are about 270 million pounds of U3O8 at a grade of 0.03 percent or 300 ppm U3O8.

US Geological Survey (USGS) research has shown that calcrete-type surficial uranium deposits are usually found within arid climatic belts, which display high evaporation rates; hence why there is a strong concentration of such deposits in arid regions such as Australia, Namibia, Tanzania, Mauritania and Argentina. Western Australia is home to some of the most recognized calcrete uranium deposits, including Cameco’s Yeelirrie deposit, one of the world’s largest, as well as Lake Way, Centipede, Thatcher Soak and Lake Maitland. Namibia also hosts world-class surficial uranium deposits, the most well-known being Paladin Energy’s (TSX:PDN) Langer Heinrich in the country’s Namib desert and AREVA’s Trekkopje.

“Calcrete uranium deposits are relatively low grade as compared with uranium deposits of all geologic types; however, they can be quite large,” Susan Hall, uranium resource specialist at the USGS, told INN. The USGS has published a database listing the grade and tonnage (not all NI 43-101 compliant) of all known world calcrete uranium deposits. “The Yeelirrie deposit in Australia is estimated to contain 128 million pounds U3O8, and the Langer Heinrich deposit in Namibia is estimated to contain in all (included mined uranium) 190 million pounds of U3O8. Deposits of this size are attractive targets,” added Hall.

Their large scale coupled with their near-surface occurrence make these deposits well suited to low-cost mining operations. “The deposits are found close to the surface and can be mined using shallow open pits,” explained Hall. “Ore is reached relatively early in the mining cycle, therefore returning on your investment sooner than if you were required to remove a great deal of rock before hitting ore.”

Large surficial deposits have also been identified in Argentina (which has similar geological characteristics to Namibia). “There are five known deposits in the country, ranging from <100,000 to more than 8 million pounds of U3O8 (not all NI 43-101 compliant),” said Hall. Her numbers are based on research data published in October 2017. “Exploration for calcrete uranium deposits in Argentina is in the early stages, no deposit has yet been mined. I am aware of one company, Blue Sky Uranium, who is exploring for calcrete uranium.”

Blue Sky Uranium’s wholly owned Amarillo Grande uranium-vanadium project is in the province of Rio Negro, in the Patagonia region of Argentina. Amarillo Grande presents district-scale potential with multiple uranium showings and three discovery targets across the 140-kilometer-long and 50-kilometer-wide property. The geology is similar to that of the Inkai deposit, where the mineralization is well preserved, with similarities to the Yeelirrie deposit, where mineralization is close to surface in sediments and soils which are likely dried up rivers and lake beds.

In March 2018, Blue Sky announced an initial NI 43-101 mineral resource estimate for one of the three discovery targets at Amarillo Grande, the Ivana deposit, defining an inferred mineral resource of 23.9 million tonnes containing 19.1 million pounds of U3O8 at a 100 ppm uranium cut off.

“This first resource estimate represents the biggest uranium discovery in Argentina in the last 40 years and it represents for Blue Sky a major step towards our goal of defining a low-cost regional-size uranium producing district,” commented Nikolaos Cacos, Blue Sky’s president and CEO. The company intends to complete a preliminary economic assessment for the Ivana deposit by the end of 2018.

Vanadium as a co-product

Both surficial and sandstone-type uranium deposits are known to host vanadium — an industrially important metal that can add value to a project as a co-product. Vanadium does not occur naturally on its own, but is present as a trace element in a range of deposit types around the world. Western Australia’s Yeelirrie and Namibia’s Langer Heinrich both host vanadium as is typical of calcrete-type surficial uranium deposits. At Blue Sky’s Amarillo Grande project, work on the Ivana deposit shows that uranium to vanadium ratios vary between 5:1 to 1:5 across the property.

What’s interesting is that the vanadium in calcrete-type deposits may be responsible for their near-surface nature. The presence of vanadium in groundwater seems to be what helps the uranium to precipitate and drop out to form these deposits. “This to me is a fascinating aspect of calcrete uranium deposits and has not yet been studied in enough detail,” Hall told INN. Hall’s work with the USGS in the Southern High Plains of the US shows that during the Pleistocene there was a lot of uranium available in groundwater. However, to date the only economic uranium-vanadium deposits in the Southern High Plains have been identified in the southern portion of the region. But why?

“When we took a close look at modern groundwater, vanadium was more highly concentrated in the southern portion of the region, coincident with the distribution of known occurrences,” explained Hall. “Modelling of the evaporation of modern groundwater shows that carnotite, the main ore mineral in calcrete uranium deposits, forms more readily from groundwater with geochemistry of that in the southern portion of the region — that characterized by higher vanadium concentrations. This indicates that deposits are forming where there is adequate vanadium to form uranyl vanadate minerals, and that the mechanism in the modern Southern High Plains could be evaporation from a single fluid.”

In other regions of the world, the deposit models are more complex, requiring two fluids (one with uranium, one with vanadium) and/or the mixing of fresh and saline water as the geochemical trigger for deposit formation. “Depending on price, vanadium could be a nice co-product from mining calcrete uranium deposits,” said Hall.

Vanadium is becoming increasingly important to both the steel industry — Chinese demand pushed ferrovanadium prices to an eight-year high in early 2018 — and in the renewable energy industry, where the growing need for mass electricity storage has created strong demand for vanadium redox batteries.

However, securing vanadium supply is a challenge given that there are less than a handful of pure vanadium plays and there is a current scarcity of operations that include vanadium as a co-product. Advanced uranium-vanadium projects offer the best opportunity to help meet the rising demand for vanadium. In turn, the presence of vanadium can improve the economic viability of uranium projects, especially given the challenging pricing environment the uranium market has been experiencing.

Near-surface uranium deposits amenable to heap leaching make ideal candidates for low-cost, shallow open-pit mining operations. The presence of vanadium as a co-product further increases the economic viability of these projects. With the low price environment for uranium, finding inexpensive sources to mine is critical — especially in Argentina, where the government is keen on expanding its nuclear energy capabilities, but currently relies on imports due to a paucity of domestic supply.

“The world price of uranium is now quite low, and uranium miners worldwide are suffering. However, the dynamics of uranium pricing in Argentina are interesting,” noted Hall. “Because the country is not producing domestic uranium, they are importing product required for their reactors. The costs of importing uranium are considerably higher than the world market price, so domestic uranium projects that might not otherwise be economically attractive in other countries are attractive in Argentina.”

Though not as economically important as unconformity-related uranium deposits, sandstone and calcrete uranium deposits do hold the potential for significant economic value — especially in regions such as Argentina where the need for domestic energy is best served by near-surface, low-cost uranium projects.

This INNspired article is sponsored by Blue Sky Uranium (TSXV:BSK). This article was written according to INN editorial standards to educate investors.