Energy Fuels Inc. (NYSE American:UUUU, TSX:EFR) (“Energy Fuels” or the “Company”) today reported its financial results for the quarter ended September 30, 2019. The Company’s quarterly report on Form 10-Q has been filed with the U.S. Securities and Exchange Commission (“SEC”) and may be viewed on the Electronic Document Gathering and Retrieval System (“EDGAR”) at www.sec.gov/edgar.shtml, on the System for Electronic Document Analysis and Retrieval (“SEDAR”) at www.sedar.com, and on the Company’s website at www.energyfuels.com. Unless noted otherwise, all dollar amounts are in U.S. dollars.

“During Q3-2019, Energy Fuels continued to be the ‘driving force’ within the U.S. uranium mining industry, as we continue to encourage the U.S. government and President Trump to support a renaissance in U.S. uranium production. We were pleased that on July 12, 2019, the President created the U.S. Nuclear Fuel Working Group, comprised of 13 Cabinet-level and other major government agencies, and directed them to develop recommendations on ‘reviving and expanding’ domestic nuclear fuel production, including uranium mining. While the original deadline for the Working Group to provide those recommendations was apparently extended from October 10, 2019 to approximately November 10, 2019, we remain confident of a positive outcome for the Company and our industry. Because Energy Fuels is currently the largest U.S. uranium producer, with the most operational production, licensed capacity, and in-ground uranium resources among producers in the U.S., we expect to be a significant beneficiary of any action taken by the U.S. government. I look forward to corresponding with shareholders as we learn more from the U.S. government on the future of U.S. uranium production.

“As previously announced, we are continuing to fulfill a new processing agreement at the White Mesa Mill, under which we are assisting in the cleanup of a formerly producing uranium mine in New Mexico. While we expect to generate significant incremental income from this project, perhaps more importantly, we are successfully demonstrating to the U.S. Environmental Protection Agency (“EPA”) and the Navajo Nation that we can be their partner in the cleanup of Cold War era abandoned uranium mines in the Four Corners Region of the U.S. We look forward to potentially seeing ‘trucks rolling’ in the not too distant future.

“In addition, we continue to be very happy with our vanadium production campaign; except prices continued to fall during the quarter. At the current time, we are mainly building inventory for later sale, while purities and recoveries remain high. We are also continuing discussions to potentially sell our product at premium pricing to customers who require higher purities. If vanadium prices do not make a recovery in the next few months, we will evaluate shutting down production to save this valuable asset for later recovery.

“Finally, during 2018 and 2019, we selectively invested in a number of critical path items at our uranium production facilities and mines in order to significantly enhance their production readiness. If and when the ‘starting gun goes off’, either due to the President acting on the recommendations of the U.S. Nuclear Fuel Working Group or generally improving uranium market conditions, we believe we are very well positioned to quickly and cost-effectively increase production and capture those higher prices. Since 2006, uranium production facilities currently owned by Energy Fuels have supplied roughly 35% of all uranium produced in the U.S., putting us second only to Cameco during this period, who produced about 50%. Our people and facilities have demonstrated, time and again, that we can respond to rapidly evolving market conditions, most recently when we commenced vanadium production within just a few months of a production decision. We look forward to once again demonstrating our ability to execute when the U.S. uranium market rebounds.” 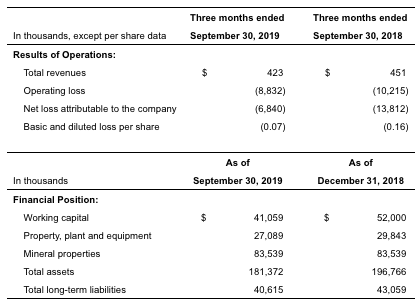 The Company plans to extract and recover uranium from its Nichols Ranch Project in 2019 at reduced levels as its existing wellfields become depleted. This will continue until such time as the incremental cost of production exceeds the value of the pounds recovered. In addition, the Company expects to continue to extract and recover vanadium from pond solutions at its White Mesa Mill through 2019 and to build its vanadium inventory at current price levels, which are close to the Company’s incremental cost of producing vanadium.

As a result of current low uranium market conditions, both ISR and conventional uranium recovery are being maintained at reduced levels until such time as market conditions improve sufficiently, either as a result of potential relief from the U.S. government, or through improved uranium market fundamentals. Until such time as improvements in uranium market conditions are observed or suitable sales contracts can be entered into, the Company expects to defer further wellfield development at its Nichols Ranch Project. In addition, the Company will keep the Alta Mesa Project and its conventional mining properties on standby. The Company is also seeking new sources of revenue, including new sources of Alternate Feed Materials and new fee processing opportunities at the Mill that can be processed under existing market conditions, largely unrelated to uranium sales prices. The Company will also continue its efforts to receive U.S. government support for domestic uranium production and will evaluate additional acquisition and disposition opportunities that may arise.

The Company expects to continue to keep the Alta Mesa Project on standby until such time as improvements in uranium market conditions are observed or suitable sales contracts can be procured.

If vanadium recovery operations from the current Mill Pond Return program are put on standby during Q4-2019, the Company plans to utilize the resulting available Mill capacity by processing stockpiled Alternate Feed Materials in the fourth quarter of 2019.

During the nine months ended September 30, 2019, the Company completed its test-mining and refurbishment program targeting vanadium at the fully-permitted La Sal Complex located on the Colorado Plateau. We completed the test-mining by the end of April 2019 and continued to pursue enhanced operational readiness targeting future commercial production. The goal of the test-mining program was to evaluate different mining approaches in previously mined out areas that selectively target high-grade vanadium zones, thereby potentially increasing productivity and mined grades for vanadium and decreasing mining costs per pound of V2O5 and U3O8. During this program, the Company refurbished the La Sal, Beaver Shaft and Pandora mines within the La Sal Complex and extracted approximately 11,000 tons of mineralized material. The Company expects to continue readiness activities through the fourth quarter of 2019.

During 2019, the Company plans to continue carrying out engineering, metallurgical testing, procurement and construction management activities at its Canyon Project, including additional bench and pilot plant scale metallurgical test work of the uranium/copper mineralization, and to continue pursuing any additional permitting actions that may be required to potentially recover copper at the White Mesa Mill. The timing of the Company’s plans to extract and process mineralized materials from this project will be based on the results of this additional evaluation work, along with market conditions, available financing, sales requirements, and/or permits required for copper recovery at the Mill.

The Company is selectively advancing certain permits at its other major conventional uranium projects. The Company plans to continue licensing and permitting the Roca Honda Project, a large, high-grade conventional project in New Mexico, with the Record of Decision currently scheduled to be completed in 2021. The Company intends to maintain required permits at the Company’s conventional projects, including the Sheep Mountain Project and the Daneros Project. In addition, the Company intends to continue evaluation of the Bullfrog Property at its Henry Mountains Project. Expenditures for certain of these projects have been adjusted to coincide with expected dates of price recoveries based on the Company’s forecasts. All of these projects serve as important pipeline assets for the Company’s future conventional production capabilities, as market conditions warrant.

During the nine months ended September 30, 2019, the Company completed $66,000 of uranium sales. The Company currently has no remaining contracts and is therefore fully unhedged to future uranium price increases.

At the current time, the Company is selling only small quantities of vanadium, while mainly focusing on building V2O5 inventory for sale in the future as prices are expected to increase. During the nine months ended September 30, 2019, the Company completed sales of 152,000 pounds of vanadium at an average price of $12.88 per pound. The Company expects to continue to sell finished vanadium product when justified into the metallurgical industry, as well as other markets that demand a higher purity product, including the aerospace, chemical, and potentially the vanadium battery industries. The Company expects to sell to a diverse group of customers in order to maximize revenues and profits. The Company is continuing to produce a high-purity vanadium product of 99.6%-99.7% V2O5. The Company believes there may be opportunities to sell certain quantities of this high-purity material at a premium to reported spot prices. The Company may also retain vanadium product in inventory for future sale, depending on vanadium spot prices at the time of production.

The Company also continues to pursue new sources of revenue, including additional Alternate Feed Materials and other sources of feed for the White Mesa Mill.

As described above, the deadline for the Working Group to make recommendations to the President originally set for October 10, 2019 has apparently been extended for 30 days. The Company looks forward to learning the recommendations, and believes this initiative has the potential to result in actions that could provide meaningful support to the uranium mining industry. It should be noted, however, that there can be no certainty of the outcome of the Working Group’s study and recommendations. No action could be taken or remedies granted, and any actions taken may not result in a meaningful or material remedy to the uranium mining industry. Therefore, the outcome of this process is uncertain.

Mark S. Chalmers, P.E., of Energy Fuels, is a Qualified Person as defined by Canadian National Instrument 43-101 and has reviewed and approved the technical disclosure contained in this news release.

About Energy Fuels: Energy Fuels is a leading U.S.-based uranium mining company, supplying U3O8 to major nuclear utilities. The Company also produces vanadium from certain of its projects, as market conditions warrant. Its corporate offices are in Lakewood, Colorado near Denver, and all of its assets and employees are in the United States. Energy Fuels holds three of America’s key uranium production centers: the White Mesa Mill in Utah, the Nichols Ranch in-situ recovery (“ISR”) Project in Wyoming, and the Alta Mesa ISR Project in Texas. The White Mesa Mill is the only conventional uranium mill operating in the U.S. today, has a licensed capacity of over 8 million pounds of U3O8 per year, and has the ability to produce vanadium when market conditions warrant. The Nichols Ranch ISR Project is in operation and has a licensed capacity of 2 million pounds of U3O8 per year. The Alta Mesa ISR Project is currently on standby. In addition to the above production facilities, Energy Fuels also has one of the largest NI 43-101 compliant uranium resource portfolios in the U.S. and several uranium and uranium/vanadium mining projects on standby and in various stages of permitting and development. The primary trading market for Energy Fuels’ common shares is the NYSE American under the trading symbol “UUUU,” and the Company’s common shares are also listed on the Toronto Stock Exchange under the trading symbol “EFR.” Energy Fuels’ website is www.energyfuels.com.