In May, US Energy Secretary Ernest Moniz said that the Obama administration is considering lifting the country’s crude export ban. Interestingly, a report from IHS suggests that the US could stand to reap multiple benefits from the rule change, including the addition of up to nearly 1 million jobs in 2018. 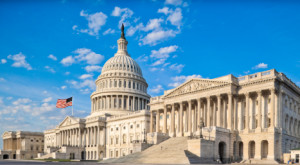 In May, US Energy Secretary Ernest Moniz said that the Obama administration is considering lifting the country’s crude oil export ban. Interestingly, a report from IHS suggests that the US could stand to reap multiple benefits from the rule change, including the addition of up to nearly 1 million jobs in 2018.

Another benefit, according to Reuters, is that lifting the ban would inject over $1 trillion in government revenues by 2030. As energy historian and IHS Vice Chairman Daniel Yergin states, “[t]his would be a significant economic stimulus that would be paid for by the private sector, not by the government — in fact the government would make a lot of money.”

Notably, IHS also points out that the removal of the oil ban would create jobs in states that do not produce oil. “Lifting the ban supports economic activity across all states. A quarter of the additional jobs are in states that essentially produce no crude oil,” the consultancy said in an introductory statement to the report.

The study was paid for by several energy-focused companies, such as ConocoPhillips (NYSE:COP), ExxonMobil (NYSE:XOM) and Chevron (NYSE:CVX).

As Investing.com notes, the majority of crude export laws in the US were enacted in the 1970s in reaction to the Arab oil embargo. At the time, there were concerns over oil supply security, and the laws were created to preserve US oil stocks. Now, however, the country has experienced an explosion of oil production. Indeed, according to the International Energy Agency, the US should be the largest oil producer globally by 2020, as per The Wall Street Journal — a far cry from being dependent on Middle Eastern oil.

That said, it isn’t all sunshine and roses for oil production in the US. Investing.com writes, “the problem now is that there is too much of the wrong type of oil (heavy imported crude versus light sweet tight crude oil) in the wrong places (Gulf coast versus North Dakota) to fit the energy infrastructure in place to serve market needs.” Furthermore, the Journal points out that the US oil boom has led to a disparity between international and US oil prices.

A May 13 article from the Journal states that key officials in Washington, including Moniz and senior Obama counselor John Podesta, also believe that the massive stockpiles of crude oil currently contained in the US are not suitable for domestic refining. “The nature of the oil we’re producing may not be well-matched to our current refinery capacity,” the Journal quotes Moniz as stating at an energy conference in Korea. Although Podesta has said that the government is looking to see “whether the current refinery capacity in the US can absorb the capacity increase to refine the product that’s being produced,” lawmakers are also considering the benefits of allowing oil to be refined internationally, much to the chagrin of domestic refiners.

Despite the US oil glut, some are certainly still concerned about energy security. The Huffington Post cites a January statement in which US Senators Robert Menendez and Ed Markey call to keep the ban, arguing that “[n]ew crude exports would be inconsistent with current law and would increase reliance on imports.” Essentially, they believe that for all the near-term economic benefits lifting the ban would provide, long-term oil security is still more important.

To be sure, ample oil supplies provide more than just energy security. As Oil Investing News has previously explored, the political clout that comes with being an oil-rich country like Russia is nothing to shake a stick at, and recent indications that China is stockpiling oil show the importance of keeping one’s oil stocks safe.

However, when a country has massive oil reserves, its power comes from the ability to withhold exports. That becomes moot if nothing can be exported in the first place. Referring to Russia’s position in terms of oil, Yergin said, “[t]he crisis in Ukraine has tilted the politics in a way that has caused a pivot. It’s realized now that the ability to export oil is an additional dimension to America’s role in the world. It enhances our position and influence,” according to Reuters.

As well as potentially pushing other countries out of the oil market to expand its position, Reuters points out that the US could provide oil to Europe if Russia chooses to cut off supplies as it has threatened to do with natural gas.

It will be interesting for both investors and political buffs to see whether supporters or detractors win the day in terms of lifting the crude oil export ban.

Just How Much Control Does Russia Have Over Global Oil Supplies?