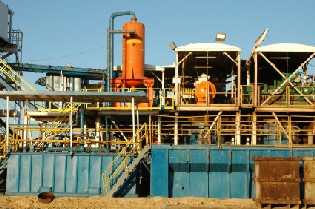 The Canadian province of New Brunswick possesses a variety of rich mineral deposits including metals (zinc, gold, copper, lead, antimony, bismuth, cadmium, and silver); non metals (salt, peat moss, potash, marl, silica and sulphur); fuels (oil, natural gas and coal); and structural materials (lime, sand and gravel, stone). All known hydrocarbon deposits are located in the Late Devonian-Carboniferous Maritimes Basin, which underlies the eastern part of the province. New Brunswick’s marginal importance for Canadian exports has increased over each of the past four years, with the percentage of domestic exports from the province reaching a historical high relative to the national total.

Most recently, the government has identified shale gas exploration and related industrial development as potentially having considerable benefits for the economic fortune of New Brunswick. As of October 2010, there are 70 oil and natural gas agreements in place that cover approximately 1.4 million hectares.

On Sunday, New Brunswick Premier David Alward concluded a meeting with Arkansas Governor Mike Beebe in Washington, D.C., with a rekindled desire to take a deeper look at shale gas development in New Brunswick. Three New Brunswick cabinet ministers recently flew to Arkansas to examine the state’s handling of the shale gas industry. Arkansas is one of only four states with a projected balanced budget, and has largely avoided the fiscal crisis sweeping the United States in part through revenues obtained from shale gas resources.

Bruce Northrup, the present Minister of Natural Resources for New Brunswick is on the record as stating, “Our government supports responsible expansion of the natural gas sector while ensuring the safety and security of homeowners and our groundwater supply. This is important for both taxpayers and industry. All of us want to see exploration and development done in an environmentally responsible fashion in order to ensure that we can gain the economic benefits possible for our province.”

In New Brunswick several private enterprises as well as publicly traded companies are currently assessing the gas potential of the organic-rich shale in the Horton Group of the Maritimes Basin including:

Contact Exploration Inc. (TSXV:CEX) has its main focus in the exploration of petroleum and natural gas properties in Atlantic Canada. The company’s resource portfolio includes the Stoney Creek Field, shale gas properties in Nova Scotia and an interest in relatively large conventional oil prospects at Parson’s Pond in Newfoundland as well as oil production in Southeastern Saskatchewan.

Corridor Resources (TSX:CDH) a junior exploration company engaged in the development of onshore petroleum and natural gas deposits also has interests in Prince Edward Island and Quebec and offshore in the Gulf of St. Lawrence. The company has natural gas reserves and production in the McCully Field near Sussex and has resources in Elgin. Corridor has drilled the natural gas discovery well at the McCully Field and has an exclusive working interest in three additional licenses located west of the McCully discovery.

Apache Corporation (NYSE:APA) has a geographically diversified portfolio of petrochemical interests and segmented revenue streams. The energy company is engaged in exploration, development and production of natural gas and crude oil. Its exploration and production interests are in North America, Egypt, Western Australia, the United Kingdom and Argentina. It also has exploration interests on the Chilean side of the island of Tierra del Fuego. It holds interests in many of its American, Canadian and other international properties through subsidiaries.

Scotiabank released a Commodity Price Index today, with a note on the Oil & Gas Sub-Index which posted a surprising decline in January of half a percent, partially due to operational impediments of Canadian crude on a key export pipeline due to repairs.  The note indicates “Canadian prices will rally back in February/March, given the recent spike in WTI and international oil prices.  WTI oil climbed to US$97.88 on February 25 (up more than US$11 last week). Curtailed exports from Libya, together with concern that unrest could intensify in Algeria (another significant OPEC producer) and possibly spread to other Persian Gulf countries have propelled prices.” Volatility has been extreme, with WTI rising over US$103 and Brent approaching US$120 in intraday trading last week.

To calm global oil markets, Saudi Arabia has resumed its role as swing supplier, lifting output over 9 million barrels per day to offset curtailed Libyan supplies. The stability of Saudi Arabian oil supply is of critical importance. “The world is much better prepared to handle an oil supply crisis today than in mid-2008, when WTI oil prices skyrocketed to a record US$147.90 alongside strong global demand and dwindling OPEC spare capacity,” stated Scotiabank vice-president of economics and commodities specialist, Patricia Mohr. Investors should note, however, that Saudi Arabia accounts for the primary source of OPEC spare capacity, totaling at least 71 percent excluding Iraq. Scotiabank has revised its WTI oil price forecast up slightly to US$97 for 2011 and US$100 for 2012 to reflect the heightened global risk premium in world oil prices.