On Tuesday, crude oil lost 1.39% as concerns over a slowdown in China and rising U.S. stockpiles weighed on the price. Because of these circumstances, light crude declined below the psychological barrier of $100 per barrel for the first time since mid-February

On Tuesday, crude oil lost 1.39% as concerns over a slowdown in China and rising U.S. stockpiles weighed on the price. Because of these circumstances, light crude declined below the psychological barrier of $100 per barrel for the first time since mid-February.

As we emphasized in our last Oil Trading Alert, weak Chinese trade data (released over the weekend) fueled concerns over slowing growth in the world’s second largest oil consumer and had a negative impact on the price on Monday. As it turned out, these disappointing numbers continued to push crude oil lower also yesterday, which resulted in a drop below the crucial level of $100. Because of these circumstances, oil investors should keep an eye on fresh economic data from China on Thursday (including industrial output, retail sales and urban investment).

Also yesterday, expectations for another increase in U.S. crude inventories raised concerns amid oil investors and pushed crude oil lower. As a reminder, overall U.S. crude-oil supplies have risen for seven straight weeks (despite falling storage levels in Cushing), but the price of light crude has been supported by strong demand for heating fuels refined from crude oil. However, the EIA showed in its last weekly report that inventories of distillates (such as heating oil and diesel) rose by 1.4 million barrels (instead a drop of 1.1 million barrels), indicating a slowdown in demand as the weather improved. Additionally, we should keep in mind that refinery utilization rates typically fall in February and March as refiners close units for seasonal maintenance. Therefore,  refinery shutdowns may have partly helped in boosting crude stockpiles and such circumstances will likely have a negative impact on the price.

Please note that analysts are expecting that today’s weekly report from the U.S. Energy Information Administration (which will release storage data for the week ended March 7) will show a two million-barrel rise in crude-oil supplies and a 400,000 barrels drop in stocks of distillates (including heating oil and diesel fuel).

Having discussed the above, let’s move on to the technical changes in crude oil (charts courtesy of http://stockcharts.com). 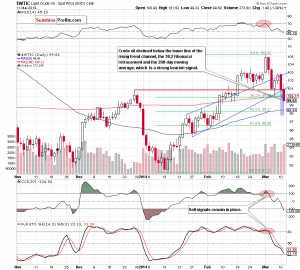 (…) if (…) crude oil drops lower, we will see a re-test of the strength of a support zone created by the 38.2% Fibonacci retracement (based on the entire rally) and the 200-day moving average. (…) if this strong support zone is broken, we will see further deterioration and the first downside target will be the 50% Fibonacci retracement, which is a few cents below the 50-day moving average (currently at $98.41)

Yesterday, we noticed such price action as crude oil declined below the lower border of the rising trend channel and broke below the support zone. What’s most important, yesterday’s downswing materialized on relative large volume, which confirms the strength of the sellers and suggests that further deterioration to the downside target is quite likely in the coming day (or days). Additionally, sell signals generated by the indicators remain in place supporting oil bears.

Having discussed the current situation in light crude, let’s take a look at WTI Crude Oil (the CFD). 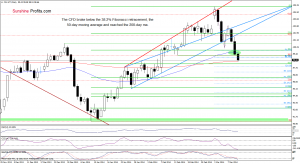 In our last Oil Trading Alert, we wrote:

(…) if oil bulls do not manage come back to the range of the rising wedge, we will likely see another attempt to reach one of the downside targets – 38.2% Fibonacci retracement or even to the Feb.14 low (we marked this area with a green ellipse). Please note that although the Stochastic Oscillator generated a buy signal, both other indicators still support sellers.

Looking at the above chart, we see that the buyers failed, which triggered a sharp decline yesterday. With this downswing, the CFD dropped below the 38.2% Fibonacci retracement and approached the lower target. As you see on the daily chart, yesterday’s drop also resulted in a decline below the 50-day moving average, which serves as resistance at the moment and successfully stopped buyers earlier today. This show of weakness encouraged oil bears to act and triggered a downward move, which took the CFD to the 200-day moving average. If this support line encourage buyers, we may see a corrective upswing later in the day. However if it is broken, we will likely see further deterioration. Please note that the nearest support (the 50% Fibonacci retracement) is slightly below the current level and may pause (or stop) the current correction. However, taking into account the fact that the indicators still support sellers, we may see a drop to $97.84 (the 100% Fibonacci projection based on the 2014 and March 7 highs and March 6 low) or even to the 61.8% Fibonacci retracement (around $96.55) in the coming day (or days).

Summing up, the short-term outlook has deteriorated significantly as crude oil declined below a support zone created by the 38.2% Fibonacci retracement and the 200-day moving average. Taking this negative fact into account and combining with the current situation in the CFD, it seems that further deterioration should not surprise us.

Trading position (short-term): In our opinion, opening short positions at the following terms is a good idea: stop-loss orders for crude oil and WTI Crude Oil (CFD): $102.95. The above is not an investment / trading advice and please note that trading (especially using leveraged instruments such as futures or on the forex market) involves risk.

All essays, research and information found above represent analyses and opinions of Nadia Simmons and Sunshine Profits’ associates only. As such, it may prove wrong and be a subject to change without notice. Opinions and analyses were based on data available to authors of respective essays at the time of writing. Although the information provided above is based on careful research and sources that are believed to be accurate, Nadia Simmons and his associates do not guarantee the accuracy or thoroughness of the data or information reported. The opinions published above are neither an offer nor a recommendation to purchase or sell any securities. Nadia Simmons is not a Registered Securities Advisor. By reading Nadia Simmons’s reports you fully agree that he will not be held responsible or liable for any decisions you make regarding any information provided in these reports. Investing, trading and speculation in any financial markets may involve high risk of loss. Nadia Simmons, Sunshine Profits’ employees and affiliates as well as members of their families may have a short or long position in any securities, including those mentioned in any of the reports or essays, and may make additional purchases and/or sales of those securities without notice.