Oil prices are down 2 percent as an oversupplied market, urged on by oil being injected into TransCanada’s Keystone XL pipeline. 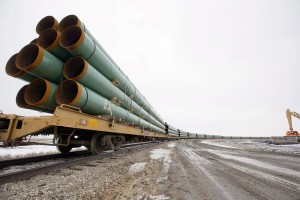 Well-supplied markets and lax demand from European markets sent Brent crude prices down 2 percent on Monday. Reuters reported that Brent futures settled at $109.39, a decline of $2.22.

Losses were capped somewhat by signals that global growth in China could be picking up. The world’s second largest oil consumer showed exports above forecasts in November. Meanwhile, crude oil imports to the Asian nation were up 19.1 percent from the previous month on a daily basis, Reuters reported.

An unexpected fall in Germany’s industrial output played a role in sending Brent prices down from they 100-year moving average of $109.74. According to Bloomberg, “[t]he oil’s premium over West Texas Intermediate shrank to its narrowest in a month.” German production was down 1.2 percent in October, hinting at uneven recovery for Europe’s largest economy.

Also playing a part in the decline in oil price was the start up of TransCanada Corp’s Keystone XL pipeline.On Monday, TransCanada announced that oil began filling the southern segment of its Keystone Pipeline XL. The company is aiming to introduce more than 3 million barrels of crude out of Cushing, Oklahoma into the pipeline in the coming weeks. Starting in the new year, the Gulf Coast line is expected to deliver 700,000 barrels of crude oil per day from Cushing to Texas.

“The Gulf Coast project is an important part of modernizing America’s energy infrastructure and providing U.S. refineries with the crude oil they need to create gasoline and other products we rely on,” a spokesperson for the company said in a statement.

The hope that commercial operation of the pipeline could give North American oil prices a boost and ease the glut of crude at the Oklahoma terminal where West Texas Intermediate prices are set. TransCanada is still waiting for the green light from the Obama administration to go throw with construction of the northern segment of the Keystone XL. TransCanada Corp applied for a permit over five years ago for the US$5.4 billion portion of the pipeline, the southern $2.3-billion segment was approved on account of it not crossing the Canada-U.S. border.

Talison Energy (TSX:TLM, NYSE:TLM) and joint venture partner, Colombian state-owned Ecopetrol (NYSE:EC) announced that following the completion of nine-well appraisals, the companies are ready to move forward in the development of the commercially viable Akacias discovery. Akacías was discovered off the coast of southeastern Colombia in 2010. The oil field is said to host roughly 1.3 billion barrels of oil.

“Akacías constitutes one of the major exploration achievements in recent years in Colombia, and clearly shows the heavy crude potential in the Llanos area, the target of Ecopetrol’s exploration campaign to reach its goals of producing one million barrels of clean oil equivalent in 2015 and 1.3 million barrels of oil equivalent in 2020. We will continue working together with our partner, Talisman Colombia, in the assessment and development not only of Akacías, but also of the potential existing across all the licensed area,” said Ecopetrol’s CEO, Javier Gutiérrez Pemberthy, said in a statement.

According to the company’s president and CEO, Dan Dinges, the 10-well pad represents a new standard for operational efficiencies and technological advancement in the company’s Marcellus operations. “”From de-risking of the Upper Marcellus and downspacing initiatives in the Lower Marcellus to drilling and completion efficiencies and bi-fuel utilization in our operations, our achievements on this pad showcase the innovation and ingenuity our team continues to demonstrate day-in and day-out.”

Africa Oil (TSXV:AOI) provided investors with an operational update on the activities in both Kenya and Ethiopia. Africa Oil is continuing with tis drilling operations, with community support in the South Lokichar basin in Northern Kenya. In Kenya Block 9 has been drilled to a depth of 2900meters, encountering a metamorphic basement at 2850 meters.

n the South Omo block in Ethiopia, the Tutule-1 well has reached a total depth of 2101 meters. The well encountered a section similar to the nearby Sabisa-1 well in the upper portion of the well but the sands which appeared to be oil saturated in the Sabisa well were not present on the Tutule horst block feature with multiple volcanic units and shales in this section.