The West African offshore oil and gas industry has a history of exploration of more than 50 years, with international majors and smaller firms having held, and relinquished, licences all along the coast since the British discovered oil in the Niger Delta in the late 1950s. 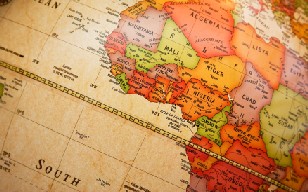 The West African offshore oil and gas industry has a history of exploration of more than 50 years, with international majors and smaller firms having held, and relinquished, licences all along the coast since the British discovered oil in the Niger Delta in the late 1950s. Nigeria and Angola are the largest oil producers in West Africa; however, exploration and development throughout the region is widely dispersed across the countries of Mauritania, Ghana, Ivory Coast, Benin / Togo, Cameroon, Equatorial Guinea, Gabon and Congo.

Interest in Nigerian oil originated in 1914 with an ordinance making any oil and mineral under Nigerian soil legal property of the Crown. By 1938 the colonial government had granted the state-sponsored company, Shell (NYSE:RDS.A) (then known as Shell D’Arcy) monopoly over exploration of all minerals and petroleum throughout the entire colony. Until the late 1950’s concessions on exploration and production were exclusively maintained by Shell, then known as Shell-British Petroleum. However, other firms became interested and by the early 1960’s ExxonMobil (NYSE:XOM), Texaco, and Gulf had purchased concessions.

The deepwater sector still has a large avenue to expand and develop both in Nigeria and throughout the region. The amount of oil extracted from Nigeria is expected to have expanded its operational scope from 15,000 billion barrels per day in 2003 to 1,270,000 billion barrels per day by the end of this year. Deepwater drilling for oil is especially attractive to oil companies because the Nigerian government has very little share in these activities and it is more difficult for the government to regulate the offshore activities of the companies. Deepwater extraction plants are less predisposed to local militant attacks, seizures due to civil conflicts, and sabotage. This permits more resources and alternatives available to efficiently extract the oil, with less potential for conflict than the operations on land.

Kosmos Energy, a privately held exploration company backed by Warburg Pincus and Blackstone discovered the Jubilee oilfield in an unpromising deep-water area off western Ghana in June 2007. On December 15 2010, the company announced the first phase of production was initiated, expecting to total 55,000 barrels of oil per day this month and increasing to 120,000 barrels of oil per day during the first half of 2011 as additional wells are completed. It represents the beginning of Ghana’s first significant commercial oil production and will allow the country to join the ranks of sizable West African oil  exporters. The production of light sweet crude began only 42 months after field discovery with an accelerated timetable corresponding with one of the shortest cycles for any deepwater floating production and storage and offloading (FPSO) based oil project of scale in deep water.

Anadarko Petroleum (NYSE:APC) had worked closely with Kosmos on the Jubilee well and during the summer of 2009 discovered hydrocarbons with the first deep-water well drilled in the equally unpromising Sierra Leone. Linking the two finds, more than 1,000 kilometres apart, became a new interpretation of west Africa’s petroleum geology which raised the prospect of a new oil province in the West African transform margin, an area between two tectonic plates. The extent of this area extends nearly 1,500 km along the coast from eastern Ghana, across Ivory Coast and Liberia, and to the west of Sierra Leone. In view of the size of the area and the number of prospects already identified, forecasts for the new province’s potential are considerable.

Much of the transform margin area is held by small or medium-sized companies and private equity interests, with Anadarko and Tullow (LON:TLW) having the largest exposure to licensing positions over the four countries.  ExxonMobil, British Petroleum (NYSE:BP) and China National Offshore Oil Corporation (CNOOC), possibly in partnership with state-owned Ghana National Petroleum Corporation (GNPC) have also been competing for interests.

In September of 2009 ENI (NYSE:E) acquired majority interests in two licences to the east and southeast of Jubilee. Vitol held the Offshore Cape Three Points and Offshore Cape Three Points South licences in a joint venture with GNPC and made a discovery with its first well in that month. Sankofa-1A, drilled 38 km east of Jubilee, showed 33.1 metres of gas column and 3.2 metres of oil, in a Jubilee-type upper cretaceous structure.

Vanco holds the key CI-401 area off Ivory Coast, the eastern border of which is only 5 kilometres from Tweneboa and only about 25 km from the nearest part of Jubilee. Neighbouring Liberia has seen relatively little exploration in recent times and its deep water remains undrilled. The government held a licensing round in 2004 and awarded three blocks off the western part of the coast, now of great interest following a find in adjacent Sierra Leone waters by Venus.

In addition to companies mentioned, several small firms are understood to hold licences in the transform margin area – the list includes Afren and Young Energy in Ghana, and Edison, Afren, Oranto and Yams Petroleum in Ivory Coast. Yams, a local company, holds a large area immediately south of Vanco’s CI-401, and, therefore, close to Ghana’s discoveries. Many of these small companies are reported to hold 100 percent interests and are likely to require joint venture partners for financing prior to drilling, so a considerable amount of corporate activity exists.

Anadarko’s Sierra Leone discovery also seems to have accelerated activity in Guinea, its westerly neighbour, where Hyperdynamics (NYSE:HDY), holds a licence covering the entire offshore – an 80,000 square km area extending out from the coast by 150-370 kilometres. The company, which apparently has no other operations, has been trying to find a venture partner and in October 2009 signed an outline agreement with the UK’s Dana Petroleum. Dana was subsequently delisted as of October 28, 2010 and the assets are currently owned by the Korea National Oil Corporation.