Europe buys one-quarter of its natural gas from Russia and will remain dependent on that supply for the foreseeable future. However, that’s not to say no natural gas companies are operating in Europe. 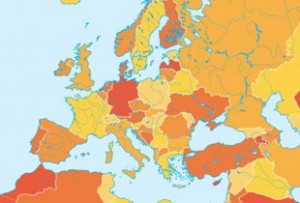 Europe buys one-quarter of its total natural gas from Russia, and despite recent geopolitical tension, ratings agency Fitch believes it will not shake that dependence for the foreseeable future.

“Any attempt to improve energy security by reducing European reliance on Russia would require either a significant reduction in overall gas demand or a big increase in alternative sources of supply, but neither of these appears likely,” a recent report from Fitch states.

The agency also notes in the report that restructuring Europe’s current natural gas infrastructure to make it less dependent on a few sources would cost close to 200 billion euros. Analysts thus do not see that as a likely outcome. And though the International Energy Agency places the continent’s natural gas in shale reserves at approximately 13 trillion cubic meters, public sentiment and governmental regulations are both against fracking.

Europe does produce some of its own natural gas, but those sources don’t come close to breaking the continent’s dependence on Russian gas. Exports from Norway are expected to recede by the early 2020s, according to The Wall Street Journal, and although the Netherlands and the UK provide some natural gas to the rest of Europe, neither produces enough to help the continent achieve energy independence from Russia. Some have looked to the US as an alternate supplier given the natural gas boom in that country, but export restrictions and the high associated costs even without those restrictions mean that US gas is not a likely solution either.

Meanwhile, sanctions on Russia have prompted analysts and investors to fear the country may block some or all of its natural gas exports to Europe, threatening a serious supply shortage. That’s worrisome as Fitch’s report shows that Europe will not be able to replace Russian natural gas should the ex-Soviet nation decide to cut Europe off.

“In the short term, Europe has very, very little means to diversify its gas imports,” the Journal quotes the International Energy Agency’s chief executive, Maria van der Hoeven, as saying at the Offshore Northern Seas energy conference. “As far as we can see, Russian gas will be needed in Europe. If you want to change that and diversify, it takes time. You can’t do it overnight.”

Another idea would be for Europe to switch up its energy mix, but other analysts have noted that considering the time and investment necessary to create new infrastructure, there are few options to do so.

Despite the difficulties tied to reducing Europe’s dependence on Russian natural gas, there are, as mentioned, still some companies trying their best to do so. As analysts have suggested, the process will not be quick, but change is possible. In European countries that do not have natural gas extraction bans or extremely strict standards, oil and gas companies are still applying for permits, with some conducting exploration work and even preparing for natural gas production.

Total is an oil and gas company interested in exploring shale gas production possibilities in Europe. The company previously held exploration licenses in France, and although those were revoked, the company has projects in Denmark and the United Kingdom that remain active. As a country, Denmark has extensive experience in oil and gas production in the North Sea, but those offshore resources are quickly depleting. The country has now begun to explore for onshore oil and gas resources, including shale gas. According to Total’s website, Denmark has some of the best potential for shale gas development in Europe.

Total has held exploration licenses in Denmark since 2010 and acted as operator, sharing the projects with the Danish North Sea Fund. The licenses are located in the Norddjylland and Nordsjaelland areas of the country, and Total plans to continue its exploration at these sites until 2016 in order to determine whether development there is feasible.

Soon, BRS intends to help establish AleAnna’s first gas production in Italy at the Gradizza-1 exploration well. It is 90-percent owned by Po Valley Energy and was drilled and tested in late 2013. Permit applications are underway for the site, as well as for surface facilities and a pipeline hookup.

Sound Oil is an oil and gas exploration and development company with a strategic focus on its onshore gas assets in Italy. Sound Oil’s projects include both exploration properties with excellent upsides and gas wells that are currently in production.

Currently, the company’s Badile gas prospect is its largest asset, and it plans to farm out and drill the property by the end of 2014. Sound Oil will then shift its focus to developing its world-class Zibido prospect, which is located on the same license as Badile. The company is planning three appraisal wells on several of its smaller discoveries as well, with drilling set to take place in 2014 and 2015.

Investing in Lithium After Tesla’s Battery Day
What Was the Highest Price for Gold?
Economics of the Copper Scrap Market
Ways to Invest in Potash