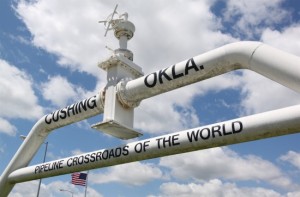 Enbridge Inc. (TSX:ENB) moved ahead of rival TransCanada Corp. (TSX:TRP) last week in a race to relieve oversupplied crude oil hub Cushing that has taken on a distinctly Canadian feel.

A week after the US Department of State had announced that an expected decision on the proposed Keystone XL pipeline would be delayed until 2013, Enbridge moved to acquire a 50 percent stake in the Seaway oil pipeline from ConocoPhillips Co. (NYSE:COP) for $1.15 billion.

The acquisition will make Enbridge joint owner of the 1,078 km pipeline from Cushing, Oklahoma to Freeport, Texas along  with operator Enterprise Products Partners LP (NYSE:EPD).

The Seaway pipeline has primarily been used to transport imported crude oil from the Gulf Coast up to Cushing, but a growing supply glut at the storage and trading hub has sparked efforts to start sending more of the oil to refiners and exporters.

Enbridge, one of the largest holders of storage at Cushing, had already been looking to do just that with their $2 billion Wrangler project. Like Seaway, the proposed 800 km pipeline would run from Cushing down to the Gulf Coast, and coincidentally, would also be a joint venture with Enterprise. The pipeline would have a capacity of 800,000 barrels per day (bpd), and Enbridge is aiming to have the line operational by mid-2013 after indicating that it has received “significant” commitments from shippers.

With its Seaway acquisition, Enbridge could now have stakes in two pipelines sending crude from oversupplied Cushing to Gulf Coast refiners and exporters. After the deal with ConocoPhillips on November 16, Enbridge and Enterprise announced that an agreement had been reached to reverse the flow of the Seaway pipeline to start sending oil out of Cushing.

The planned reversal would begin in the second quarter of next, and initially see 150,000 bpd moving south. This would then be increased to 400,000 bpd within a year.

The purchase of the Seaway pipeline from ConocoPhillips has cast doubt over whether Enbridge will continue to pursue the Wrangler project, but a spokesperson for the company told the Calgary Herald that there was still a need for additional capacity out of Cushing beyond the reversed Seaway pipeline.

“What this would do is allow for the immediate conduit into the U.S. Gulf Coast,” explained Vern Yu, VP of investor relations.

“If there is sufficient shipper interest to go beyond (the pipeline), we can always twin or expand Seaway, so Seaway and Wrangler are effectively interchangeable,” he added.

Enbridge’s latest move comes at a particular bad time for rival TransCanada, who are still licking their wounds from the news that they would have to wait until at least 2013 to hear if they could move ahead with their Keystone XL pipeline.

Keystone XL is a proposed extension to TransCanada’s existing Keystone pipeline system, which already connects Alberta with Cushing and refineries in Illinois. The current system has a capacity of 590,000 bpd, and the proposed extension would add an additional 510,000 bpd of capacity.

But the extension has run into fierce opposition due its proposed route through the Ogallala aquifer that supplies drinking water to six US states, and a decision on this hot-button issue has now been put off by the State Department until after the 2012 presidential elections.

Despite this setback, TransCanada have indicated that they will continue to pursue an approval for the Keystone XL pipeline, and have even talked of pushing ahead with the phase 3 segment of the project from Cushing to the Gulf Coast.

“Certainly the message we’re hearing is that [our shippers] would very much like to see that Cushing-to-Gulf Coast phase come in as soon as possible. So we’ll take a very hard look at the commercial underpinnings for that,” said Alex Pourbaix, TransCanada’s president of energy and oil pipelines.