A trade mission to China led by Calgary Economic Development will wrap up on May 31 following talks over the future of Chinese investment in the Alberta oil sands. 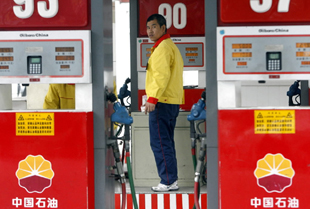 A trade mission to China led by Calgary Economic Development (CED) will wrap up on May 31 following weeklong discussions between the mayor’s office, industry representatives from the energy and financial services sector, and their counterparts in Beijing and Shanghai. While plans to boost tourism links have also been on the agenda, the focus of the talks has undoubtedly centered on Chinese investment in the Alberta oil sands, which in the past 2 years has topped $13 billion dollars from the likes of energy giants Sinopec Corp. (NYSE:SNP), CNOOC Ltd. (NYSE:CEO), and PetroChina Co, Ltd. (NYSE:PTR) This already substantial foray into Canada’s Northwest may be just the tip of the iceberg, however, with the Chinese government eager to secure an oil and gas supply network, and the deep pockets to pay for it.

The massive Chinese investment in overseas oil and gas projects over the past few years stems from the need to fuel an economy growing at a blistering clip. Annual growth rates have hovered around 10 percent for the better part of 20 years, and fuel consumption has inevitably surged to keep pace with the increasingly industrialized and modern economy. Oil consumption, which in 2010 stood at roughly 9 million barrels per day (bpd), is expected to grow by 4-5 percent a year to reach 10.6-11.3 million bpd in 2015, and 11.8-13 million bpd in 2020 according to the Energy Research Institute of the National Development and Reform Commission (NDRC), China’s economic planning agency. The NDRC expects foreign imports to make up 65 percent of total oil consumption by 2020, up from the current mark of around 54 percent, which means China will need to bring in an additional 2.8-3.6 million bpd of foreign oil in 10 year’s time.

The Alberta oil sands, one of the largest deposits of oil in the world and still underdeveloped, are therefore clearly attractive to Chinese energy firms. Production currently stands at 1.5 million bpd, but is expected to jump to anywhere from 3 to 5 million bpd before 2030. To get to this point, however, the Canadian Energy Research Association (CERI) estimates that capital investments to the tune of $253 billion are required. Of this infrastructure, key to China’s ambitions is the Northern Gateway Pipeline, which would link the Albertan interior to the Pacific coast with a terminal in Kitimat, British Columbia.

The Northern Gateway Pipeline, a $5.5 billion project spearheaded by Enbridge Inc. (TSX:ENB), is envisioned to be a lucrative link to Asian markets for Canada, but has run into opposition over potential environmental impacts, as well as land-rights issues related to native groups whose territory the pipeline would cross through. Despite this, the majority government recently won by the Conservative party may prove to be a critical spark towards approval of the project; only 3 days after the May 2 election, the National Energy Board (NEB) issued an order for a public hearing scheduled to begin on January 10, 2012, and is expected to last until July 2012. Roughly 12 weeks after this a ‘Reason for Decision’ will be released, and by end of summer 2012 should confirm whether or not the project will be granted federal approval. The recent decision over the Northwest Transmission Line, which will link up the ‘Golden Triangle’ region of BC to the province’s hydropower grid, will buoy those keen to see the project break ground soon after the hearing wraps up.

If, and when the Northern Gateway Pipeline is approved, Alberta Finance Minister Lloyd Snelgrove expects investment from China into the oil and gas sector to triple what has already come in the last 2 years. Snelgrove and others currently in China for the talks believe Canada can not afford to spurn Chinese advances, with the implications of closer ties for the energy industry and the broader Canadian economy too vital. “Recognize that the whole world is beating a path to the door of China”, remarks Gordon Houlden, head of the China Institute at the University of Alberta. “Relationships need to be built.” Snelgove echoes these sentiments: “China has become the second-biggest economy in the world,” he notes, “and just about everything they want, we have.”