Malaga has placed its tungsten mine on care and maintenance following a power-related accident. Meanwhile, the company is reviewing its plans and searching for financing. 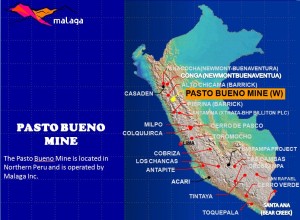 Malaga (TSX:MLG,OTCQX:MLGAF) has placed its Pasto Bueno tungsten mine in Peru on care and maintenance. “It’s an unfortunate situation at the moment, but all efforts are being put forth to bring back operations as soon as possible,” president and CEO Pierre Monet told Tungsten Investing News.

Malaga’s story is one all too commonly heard in the mining industry. The company is dealing with falling grades and rising costs in a market where metal prices have softened. Malaga also realizes that its future lies in the development of its asset, but the financing to achieve that is hard to come by.

The company’s difficulties intensified in October when a contractor cutting trees along the road dropped a tree into a transmission line, taking down five poles. Malaga had generators meant for backup power and decided to employ them to continue production, but chose to place its processing plant on care and maintenance.

“We ran [the generators] for about two weeks,” Monet explained. “We were hoping we could get the power back faster, but we could not. And there was no way we could continue like that.”

He said power costs jumped from about 8 to 10 cents per kilowatt to 24 to 30 cents per kilowatt when using the diesel generators. On November 11, the company announced that it was also suspending its mining operations to reduce costs and preserve cash.

Malaga decided to use the mine closure as an opportunity to review its mine and develop a plan to make operations more efficient.

The power accident resulted in an additional cost increase for Malaga, but the company was already battling rising costs. In its Q3 results, released last week, Malaga reported a net loss of $900,000 compared to a net income of $2 million in Q3 2011.

The company said the main causes of this shortfall were lower sales volume, a 32 percent increase in average cash cost production and a lack of copper sales during the quarter.

While lower tungsten prices also played a role in the results, Monet explained that the most significant factor in the company’s poor performance was the reduction of mine output.

“This year we have processed lower grades, so the fixed costs are higher,” he said. “We have had close to a 25 percent reduction in head grade and that has an impact on recovery.”

“Really what we need to do is to continue development to the zone where the grade would be closer to 0.65 or 0.7,” said Monet.

Access to that zone requires a ramp that Malaga currently does not have the money to complete.

The company’s working capital deficit has swollen to $4.1 million from $1.5 million at the start of the year. Cash on hand has been reduced from $530,885 at the beginning of 2012 to $53,364. And while its mine is on care and maintenance, Malaga still has bills to pay.

Aggravating matters, the company is not generating revenue from copper sales because it does not have the equipment to process the metal. Malaga had been relying on a tooling plant in Southern Peru, but that facility closed for improvements during Q3. Monet said Malaga was not given proper notice and was therefore unable to process its by-product, which had a big impact on Q3.

Monet said the company expects to process all the copper that it has during this quarter. Malaga also has shares of Dynacor Gold Mines (TSX:DNG) that it plans to sell on the market. While these activities will generate some revenue, that does not change the fact that Malaga needs financing.

Power is expected to be restored at the end of November. That raises questions as to whether or not Malaga will attempt to restart its mine even if it lacks funding for development.

Monet would not say outright, but instead told TIN, “we are currently extracting ore where the ramp is built. So restarting the mine and continuing development of the ramp are linked together. Everything will happen at the same time.”

“Our interest is not to restart and fall back where we are,” he added. “We do not want to be put back into the same position as this year with lower mine output and lower grades.”

Thus far, efforts to obtaining financing have not been successful. Monet said there is still nothing binding, but the company is progressing and going in the right direction.

While Malaga is reviewing its mine plan and searching for financing, it still has an offtake agreement in effect that guarantees all of its tungsten production to its customer. As there is currently no production, the company is not fulfilling its end of the bargain. If Malaga does not restart its mine and start shipping out tungsten, the default process could be triggered and then there will be damages to pay.

As with the other challenges the company is facing, Monet portrayed a sense of optimism and confidence about this situation.

“We have commitments and we fully intend to meet our commitments,” he said.