In the State of the Union address, a challenge to the US was issued by President Obama, generate 80 percent of electricity with renewable sources. This transformation of the world’s largest energy consumer is truly a monumental task and will take vast resources to achieve. In this two part series, we look at the investment potential of this challenge. 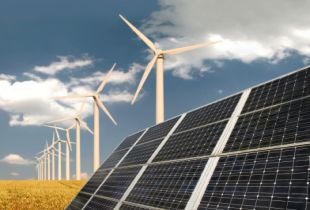 In this special two part series we will look at the investment potential from President Barack Obama’s challenge during the State of the Union address: to generate 80 percent of the electricity with renewable sources by the year 2035. This monumental task of moving the world’s number one energy consumer away from coal as the primary fuel for electrical generation, while overwhelming, is entirely possible. Trillions of dollars could potentially be spent on this project, many on small upstart firms as well as many of the worlds leading companies. The shear size of this task will use millions of tonnes of rare earth elements for wind turbines, silver for mirrors on condensed solar projects, manganese, molybdenum for steel and, vanadium in batteries and the list goes on and on.

In researching the technologies available for this transformation, I found that a few plans already exist created by people far more knowledgeable about the monumental task of determining energy policy than myself.

The most relevant plan to the Presidents challenge comes from Google, because of its goals within the allotted time frame. Google’s plan is to achieve renewable energy cheaper than coal, and to replace all coal fired plants by 2030. While the President’s challenge includes ‘clean coal,’ no such technology currently exists. Google’s plan eliminates coal entirely.

Energy efficiency standards are the most beneficial to local economies, as well as the cheapest way to cut back on fossil fuel demand. The Energy Information Association (EIA) expects a 1 percent demand increase per year on average, add in Google’s plans for electric vehicles, an added 8 percent over the time span of the project will put added demand in the system. Over the 19 year period of the plan, the increased demand for energy totals 27 percent.  By using basic home efficiency standards by 2030 this added demand can be held flat, if not reduced.

This can be achieved by requiring energy efficient appliances, and proper home building standards. This is extremely beneficial to local economies.

Rare Earth Investing News interviewed Brennen Jensen, Climate Group Senior Program Manager for Ecology Action on the importance of energy efficiency and its benefits to local economies. “For every $1 dollar spent on energy efficiency, $6-7 worth of economic gains is achieved on a local level through job creation, and energy savings. It is entirely possible to achieve 10 percent savings with the most basic efficiency upgrades. To get 20-40 percent savings, more throuogh measures must be taken. Double pane windows and insulation, energy efficient appliances and modern HVAC systems are needed,” stated Jensen.

Investment potential lies within the development of renewable energy that is, ultimately, cheaper than coal. The massive deployment of wind farms will require truly massive amount of steel for the structures, copper for the wiring, and most critically, rare earths for the electric generation systems. Photovoltaic solar cells, in particular thin film “CIGS” solar cells, use molybdenum as a base for the other materials. Concentrating solar power (CSP) uses silver for the mirrors, steel, and host of other metals depending on the type of CSP generation. The Google plan calls for replacing all coal and oil electricity generation, and about half of that from natural gas, with renewable sources:

Let’s start by breaking down wind power generation. Please take note, these statistics are estimates to give scope to the amount of materials needed, based on currently available wind turbines. Undoubtedly, over the next 25 years there is a real chance that strides will be made in efficiency, and design. However, according to Jevons Paradox any increase in cost efficiency, or technological advance ends with an increase, not a decrease in the use of the material; when technology gets cheaper the market tends to demand more of it.

The high concentration of neodymium and dysprosium in the turbines of wind power when magnified on the scale in which this plan is based is a huge investment potential. No one can say whether the materials will be sourced from US or North American mining operations, however, as of now, only one such mine exists, Molycorp (NYSE:MCP) owns the Mountain Pass mine in California.

In order to arrive at the total of rare earths used to manufacture 380 Gigawatts of wind generation, some math is required:

This is a staggering amount of metal over a 25 year period. Molycorp’s Mt. Pass Mine has a known reserves over 20 million pounds, and recently inked a deal with Hitachi Metals to develop rare earth magnets. Most likely, the materials will come from a host of sites, including Lynas Corp’s (ASX:LYC) Mt. Weld deposit in Australia, Great Western Minerals’ (TSXV:GWG) Steenkampskraal Mine in South Africa and Hodias Lake deposit in Canada. And of course, a lot of the rare earth will come from rare earths mined in China.

A few other junior miners are working on deposits worldwide. Quantum Rare Earth Development (TSXV:QRE) is working on their Elk Creek deposit in Nebraska. Arafura Resources (ASX:ARU) is developing their Nolans Deposit in Australia. Stans Energy (TSXV:RUU) has made strides on their Kutessay II deposit in Kyrgyzstan. These are just a few companies that are hoping to start production on their deposits, for a list of rare earth companies with a market cap under $2 billion, have a look at Rare Earth Investing News’ Rare Earth index.

Some analysts have suspected that the Chinese are employing trade policies as strategy to produce wind turbines and other high tech goods domestically in order to create higher paying manufacturing jobs, while also reaping the increased profits of selling value added products over raw materials. The nation is now home to the highest amount of wind power generation.

The typical 1.5 MW wind turbine in the US is 80 meters tall, and uses 58,000 pounds of steel to reinforce the concrete tower. There are much larger wind turbines being developed right now, upwards of 10 MW, which are larger, and use more steel and larger magnets.

The plan to generate 380 Gigawatts of power will require over 126,000 individual turbines if the average turbine generates 3Mw, 76,000 at an avg. 5Mw turbines. When you look at the potential in these regards you can see the massive amount of resources needed to achieve this task. Using the 58,000 pounds of steel used by 1.5Mw turbines, 76,000 5Mw (which would use more steel than smaller 1.5Mw towers) the total for steel alone is 4.4 billion pounds of steel. Depending on the alloy, most high strength steel contains about 8 percent molybdenum. Using the 4.4 billion pounds of steel needed, over 352 million pounds of molybdenum would be required.

Currently, the five largest wind turbine manufacturers are as listed in terms of market share, in 2009 according to BTM Consultants.

The largest wind turbine currently in production is the Enercon E-126. With a generating capacity of over 7MW, this turbine has the ability to generate massive amounts of power in the same area as smaller turbines. Due to its size it is best suited for off-shore wind generation.

Vestas, the world’s largest manufacturer of wind turbines, is a Danish firm. Their main North American Operation is based in Portland, Oregon, with production facilities in Colorado, they are suited to supply large amounts of wind turbines to the US market.

Rare earth metals are not the only metals involved in the production of wind turbines. Massive amounts of high strength steel are needed to build the towers. This steel will contain molybdenum, manganese and vanadium in the alloy to reduce oxidization, and increase strength. The massive demand increases from large scale projects such as these will strain supply chains of many metals needed to complete them. This will undoubtedly raise the prices of these metals in a substantial manner.

In the upcoming article, we will look at the investment potential in solar, geothermal, as well as related industries such as electric vehicles and energy storage systems vital for efficient solar projects. The growth potential in the battery industry alone because of the thousands of different applications is immense.