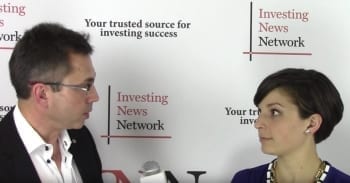 Jon Hykawy of Stormcrow Capital believes a recovery for rare earths is still a ways off. However, there are still a few rare earth juniors outside of China who might be successful.

At the recent Vancouver Commodities Forum, Jon Hykawy of Stormcrow Capital took some time to chat with the Investing News Network about the rare earths market so far in 2016.
Rare earth prices have remained under pressure this year, and Hykawy stated that it could still be some time before the market sees a recovery. Still, he sees more than one rare earth junior making progress despite the current low pricing environment.
Watch the interview below for what he had to say:


Give me my free report!
Interview Transcript
INN: So, we’re about halfway through the year now. What have you seen so far in terms of performance of rare earth prices? Which are the best? Which are the worst, and why?
JK: This is not where I should start crying, right? Because I’m—no, I guess not. So far frankly, the rare earth recovery that a lot of people have been hoping for hasn’t been happening.We’ve seen lanthanum and cerium prices languishing.We’ve seen the magnet materials down. There are a number of reasons for that. Not the least of which though is that a lot of the industrial consumers of rare earths, especially magnet materials, have been avoiding their use. And so, you’ve seen a few things happening in the space like General Motors (NYSE:GM) announcing the new Volt and Bolt drivetrains use dramatically less rare earths than the original Volt drivetrain did.
All of those things conspiring to push down, continue to depress global demand and keep prices at a low level.
INN: Alright. And what have been the biggest surprises for you so far this year, if any?
JK: Well, I think the fact that you’ve got companies like Chevrolet, like General Motors, actively coming out and saying, “We are de-emphasizing rare earth use.” This persistent idea that somehow access to rare earths is very difficult, that’s been a bit of a negative surprise. On the plus side, I’m starting to see a few companies that are doing some serious work with respect to doing what I had suggested a couple of years ago, which is ignoring the Chinese situation, ignoring what the current prices are, trying to figure out a way to reduce costs enough so that they become profitable in this environment.
INN: Okay. So, do you think that a recovery in rare earth prices is still possible? What would need to happen for that to happen?
JK: Exactly as the old marketing adage goes, that the cure for high prices is high prices, the cure for low prices is low prices. Unfortunately, it’s generally sustained low prices. We’ve had a few years of this since sort of 2012, four years obviously hasn’t been enough. I think we’re probably looking at at least another couple of years of lower prices before these buyers start to come into this space with the mindset that they can get what they need when they need it, and that the market is sort of regularized again. We’re not going to see a sudden change in Chinese quotas again for example.
INN: Right. You’ve also mentioned how you think that some of the juniors outside of China can succeed. Do you see any juniors employing innovative strategies who might still be successful outside of China?
JK: A few. A few are, actually. You’ve got one good example in Medallion Resources (TSXV:MDL). Medallion has been a proponent—and they’re not the only ones by any means—but Medallion has been a proponent over the years of rather than going out and building a large mine with the expectation that the market is going to grow and take all of this material from you, why not process someone else’s waste material to start? That eliminates the need to build a mine, it eliminates the substantial amount of Capex. It eliminates the time to permit a new mine as well.
And so, they, amongst others, are examining taking, for example, heavy mineral sands tailings, which are rich in monazite, concentrating the monazite stream out of those, and then processing them in a chemical plant. The only thing they need to permit is the chemical plant. They have to worry about, obviously, especially the monazite, the disposal of thorium and uranium. But that’s a manageable problem, that’s a problem that we know how to solve. So, they certainly have done a reasonable job in advancing that approach.
The other side of the equation is, how do you reduce the processing cost of rare earths? And there are companies like, a privately-held company, Rare Earth Salts, who have done a fairly significant amount of work on how to separate rare earths from one another using novel approaches. Not the solvent extraction methodology that China uses, but something completely new. In doing that, there’s a good chance they could take, and possibly cut the price of rare earth separation, by a factor of two or three.
INN: Wow.
JK: Yeah, significant.
INN: Interesting. Okay, well thank you for joining me, Jon.
JK: You’re welcome Teresa.
Don’t forget to follow us @INN_Resource for real-time news updates!

One response to “When Will Rare Earth Prices Recover?”