Vanadium-redox batteries could be the energy storage form of the future as companies look towards automated production. 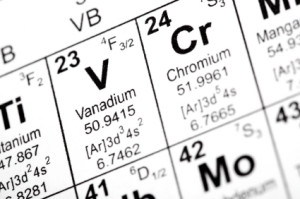 The inventor of the vanadium-redox battery (VRB) believes the world is on the edge of making the batteries an economically viable product, a goal which could change the face of energy storage.

Dr. Maria Skyllas-Kazacos, a professor emeritus at the University of New South Wales and the creator of the VRB, made the comments at the 2nd Annual Vanadium Symposium hosted by VanadiumCorp (TSX:VRB) on September 30.

Skyllas-Kazacos helped create the first vanadium-redox battery in the early 1980s and since then, she has helped refine the capabilities of the battery. She says companies are finally making a push to make the storage systems commercially available and create an automated production system which will make the technology widely available.

At its simplest, in Skyllas-Kazacos’ words, the VRB is a battery that uses sulfuric solutions to power itself. A vanadium electrolyte passing through the middle stack allows the battery to work, with a solution filling two tanks on either side. Unlike other batteries – such as the lithium-ion battery found in your iPhone – a VRB doesn’t wear out. Testing has shown it can be charged and have 200,000 charging and discharging cycles, with research suggesting it has an infinite lifetime.

One VRB requires six to eight kilograms of vanadium per kilowatt hour, so a 10 megawatt per hour battery would need 60 to 80 tonnes of vanadium.

However, since the early 1990s, the batteries have been stuck in a form of developmental purgatory due to a mixture of patents and a wariness of energy storage.

What caused the delay?

Up until 2006, companies weren’t allowed to produce a VRB due to the terms of the initial 1986 patent. The University of New South Wales held the patent, licensing it to various companies throughout the 1990s. By 1998, the university had sold the patent to Australian Pinnacle. During this time, the battery was used in trials as an emergency battery for a submarine, to power a golf cart and for a solar-powered house in Thailand.

From there it was eight years before the patent expired, allowing companies to enter the market.

“Up until that point, there was restrictions on the commercialization by other companies. This basic patent stopped people from working on them,” she said.

The other reason for a delay was caused by a reluctance of renewable energies to embrace the VRB and its capabilities. Renewable energy companies received subsidies from the government to spur their growth. From there, Skyllas-Kazacos says, companies were worried energy storage would limit the amount of subsidies they would receive and preferred to see the money go straight into the pockets of renewable energies.

A reversal on the cards

Since 2006, there has been a subtle shift in the VRB market which is making it more attractive to companies and investors alike. Countries like Japan and Germany have started providing subsidies to companies which are working in the energy storage industry. In March 2014, Japan decided to make this possible after the Fukushima nuclear accident which heightened energy supply issues.

Citizens are also fed up with paying exorbitant rates for electricity which they help produce. Vanadium-redox batteries could help stem that problem as they would create power during low-peak times and then allow people to use the power during high-peak (and therefore high price) times.

Sumitomo (TYO:8316) has used VRBs in the past as it tested the potential of energy storage. Now, the company is moving towards commercial production of the VRB system and subsequent automated production.

“As production volumes increase, which is happening already, it will become economically viable to set up these automated production lines,” Skyllas-Kazacos told Vanadium Investing News after the symposium.

“If each household had a small refrigerator holding a vanadium battery, you could use that to power your home,” she said.

“There’s nothing else on the horizon that can deliver like vanadium-redox batteries,” she said.

How to Invest in Mobile Apps
10 Top Pharma Companies by Revenue
ION Energy CEO Ali Haji: Leading Lithium Exploration in the Underexplored Jurisdiction of Mongolia
How to Invest in Chromium