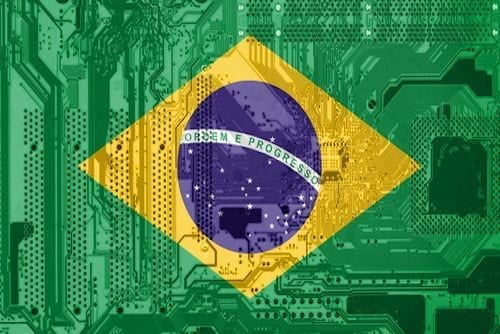 Brazil is leading the way in the production of battery tech metals manganese and vanadium.

Both manganese and vanadium are increasingly being viewed as leading-edge metals for battery production.

Brazil’s vast resource-rich landscape and newly revised mining regulations are attracting increased foreign investment in the exploration and production of both of these high-tech metals.

Traditionally key industrial metals in the production of steel, manganese and vanadium are quickly becoming critical materials for a new age in energy, playing a significant role in advancing battery technology from electric vehicles (EVs) to large energy-storage systems.

In today’s emerging green-energy economy, manganese is used in the production of batteries for portable devices, EVs and for other renewable-energy applications, including electricity grid storage such as Tesla’s (NASDAQ:TSLA) Powerwall batteries. Lithium manganese oxide batteries, notable for their high thermal stability and safety over other lithium-ion battery types, are widely used in medical equipment, power tools, laptops and electric bikes.

In the EV industry, the metal is key to the production of lithium manganese cobalt oxide (NMC) batteries. With a cathode chemistry ratio of 60 percent nickel, 20 percent manganese and 20 percent cobalt, the raw material cost is lower than that of other lithium-ion battery chemistries. The reduced charging time and longer lifespan compared to the more commonly used nickel cobalt aluminum (NCA) batteries has EV makers like Tesla and others considering making a switch.

Vanadium has also emerged as high-performing energy material. While lithium-ion batteries are popular in EVs, the longer lifecycle and unlimited rechargeability of vanadium redox flow batteries (VRFBs) makes them ideal for large-scale energy-storage systems. Large-scale energy storage is key to solving the intermittency problems associated with renewable energy sources such as solar and wind, allowing for around-the-clock reliability. The global market for large-scale energy-storage systems, including VRFBs, is projected to grow at a CAGR of 18 percent over the next six years to reach $7.45 billion by 2024.

Brazil a global supplier of manganese and vanadium

In Brazil, one of the most resource-rich nations, both manganese and vanadium can be found in abundance. The South American country is home to the world’s third-largest manganese reserves (116 million tonnes) and is the fifth-largest producer with output of 1.2 million tonnes of the metal in 2017. Major miner Vale (NYSE:VALE) is Brazil’s largest manganese producer, accounting for 70 percent of its market, with the majority of that production coming from the Azul mine in the northern state of Pará.

Brazil also ranks fourth in global vanadium production, putting out 8,400 million tonnes in 2017. Largo Resources (TSX:LGO), the country’s largest vanadium producer, holds the Maracas Menchen mine — the highest-grade vanadium mine in the world — located in Bahia state. The company, which supplies high-purity vanadium flake and powder for the battery market, is looking to a production total of up to 9,950 tonnes of vanadium pentoxide for 2018.

Rising global demand for energy metals such as manganese and vanadium is bringing junior resource companies to seek out what Brazil has to offer. Maxtech Ventures (CSE:MVT,FWB:M1N,OTCMKTS:MTHEF) has secured both manganese- and vanadium-focused projects in Brazil.

Maxtech’s flagship project is a large 40,000-hectare land package of manganese mineral claims in the Juina region of Mato Grosso state. The company recently announced its partnership with energy research firm Cairn ERA, which supports the company’s goal to support clean-energy technology. Speaking about the partnership, Cairn ERA Managing Director Sam Jaffe said “the supply side of the battery industry is in need of new sources of all crucial materials, including manganese. Maxtech has shown that it could become a major player in this space.”

In Bahia, Maxtech recently acquired 3,500 hectares of vanadium claims next to Largo Resources’ Maracás Menchen mine. “The new generation of batteries being manufactured are establishing manganese and vanadium as the strategic tech minerals of the future,” said Maxtech CEO Peter Wilson. “The vanadium mineralization observed and successfully mined in the area by Largo Resources and our current operations in Brazil made Bahia a logical step for Maxtech. We look forward to acquiring additional claims with potential vanadium mineralization in other jurisdictions as well.”

Brazil has long attracted the attention of mining investment, as evident in the country’s well-established resource sector. Today, mining represents about 7 percent of Brazil’s GDP and it is a leading exporter of many of the world’s most lucrative commodities — totaling $28.37 billion in 2017.

Foreign investment in the country’s mining sector is expected to grow as Brazil’s government implements changes to the mining code. Brazil’s National Mining Plan 2030 includes allowing for 40-year exploration rights and a tax rate capped at 4 percent. “We are taking a decisive step towards more modern laws and institutions for the mining sector to attract new investments,” said Brazilian President Michel Temer. “Naturally we are talking about — and want to continue to talk about — a competitive, innovative and sustainable mining industry that requires an updated regulatory framework.”

The move prompted industry group Ibram to raise its Brazil investment forecast for 2018 to 2022 to $19.5 billion from $18 billion for 2017 to 2021. Reuters reported that the firm said that its next five-year projection may increase further as Brazil continues to revise its mining sector regulations.

Energy storage is the key to enabling widespread adoption of EVs and renewable energy in order to wean the global economy off fossil fuels. Advanced energy-storage systems need reliable supplies of tech metals such as manganese and vanadium. Brazil already has the industry and infrastructure in place to become a leading go-to source for these metals, and we can expect to see more exploration and production activity as the government continues to enact more mining-friendly regulations.

ERG: Copper Prices Could Reach US$7,000 Next Year
Australia’s Lithium Producers Could Benefit from Vertical Integration
Best Copper Stocks of 2020 on the TSX
The New Techniques and Technologies Disrupting the Automotive Industry

One response to “Brazil’s Tech Metals: Manganese and Vanadium”

Comments are closed.
×
See our exclusive index of Manganese companies on the move
EXPLORE