Spirit Banner Capital Corp. is pleased to announce that it has entered into a definitive agreement with Ion Energy Ltd.

Ion Energy is a private company incorporated under the Business Corporations Act (Ontario) on August 3, 2017, and has been engaged in the business of seeking and identifying lithium assets in Asia since incorporation.

Ion Energy LLC, a company incorporated in Mongolia and a wholly owned subsidiary of Ion Energy, is the owner of a lithium exploration license (the “License”) to explore an area approximately 81,758 hectares in size containing lithium brine targets (the “Baavhai-Uul Project” or the “Property”). Limited work by the Mongolian University of Science and Technology has indicated lithium content in brines of up to 810ppm Li for brine and lake sediment samples on the Baavhai-Uul Project.

The Baavhai-Uul Project is located in Sukhbaatar province, southeastern Mongolia, approximately 800 km southeast from the capital, Ulaanbaatar, 200 km south from the province centre, Baruun-Urt and 24 km north of the border with China. The Property belongs to Ongon and Naran sub-provinces administratively, nearly 30-40 km from its centres and covers an area of approximately 81,758 hectares in size (Figure 1). 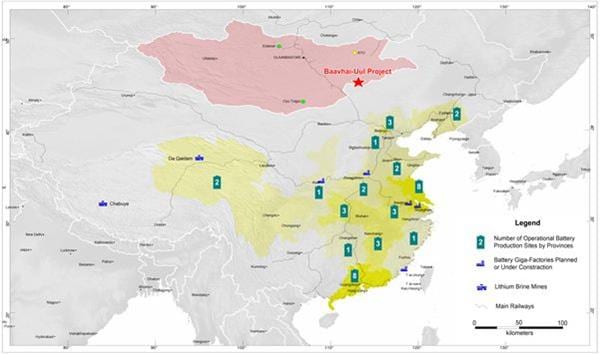 There are a number of communities in the region. The largest town is Baruun-Urt, which is the centre of the Sukhbaatar province and located 200 km north of the Baavhai-Uul Project. The closest towns to the property are Ongon and Naran sub-province centres located about 30 km to north and 40 km to south, respectively. These local towns could potentially supply the most basic needs for the early stages of exploration and project development including food, labour, and other supplies. However, the majority of mining-related equipment and services for more advanced projects should be obtained from Ulaanbaatar.

The Baavhai-Uul Project is situated in the Dariganga platform, at an elevation of approximately 1,100-1,200 meters above sea level. Dry, wide valleys, a series of hills, volcanic craters with flat-like tops, small lakes, and sand dunes are widespread throughout the region. The highest mountain is Jargalant, approximately 1,238m above sea level. Generally, the region lacks running water sources at surface; however numerous small lakes are distributed on the property mostly in quaternary sediments and contain shallow water during the rainy season or immediately after rainfall. The lakes are mostly saline and suitable for industrial uses such as drilling.

Recent sampling work done by geoscientists from the Technical University of Mongolia in dry lake areas of the Baavhai-Uul Project indicated an average of 463ppm Li. The sampling consisted of 2 pits drilled by hand auger in the lake bottom and collected in 20 cm intervals. The team collected 11 samples from the two dry lakes located spatially in the property as shown in Figure 2. The lithium samples were sent to and assayed by the independent certified assay lab Khanlab LLC located in Ulaanbaatar, Mongolia. Khanlab LLC is a certified assay lab pursuant to the ILAC Mutual Recognition Arrangement (IILAC MRA). 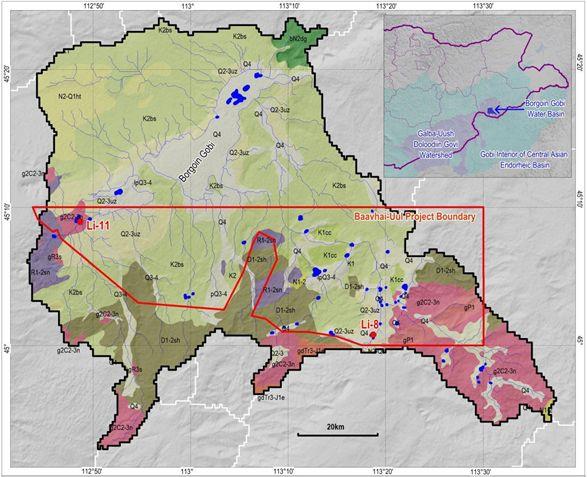 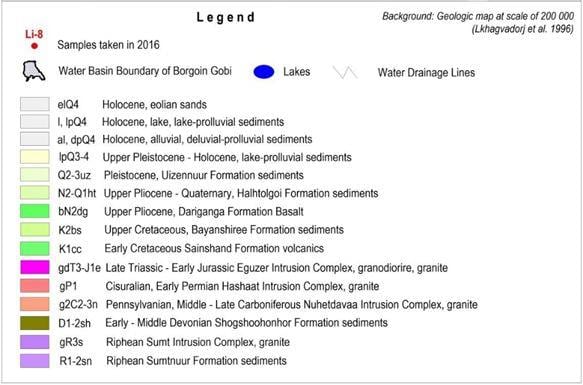 Sample coordinates, descriptions, and analytical results are listed in Table 1. Significant anomalous lithium grades ranging from 211 ppm to 810 ppm were returned from both locations and might be indicating the presence of continental lithium brine.

A two-stage exploration program is being designed to evaluate the Baavhai-Uul Project. Phase 1 of the proposed exploration program will consist of surface and near surface geochemical sampling of sediments and brines using auger drill holes, initial geophysical surveys of the basins, drilling to establish basin stratigraphy and conducting water and lake sediment analytical works. Regional hydrogeologic water sampling is planned for at least 50% of the Property. Rock chip sampling of bedrock intrusion dykes is also planned for Phase 1 to aid in the determination of source of lithium mineralization on the Property. Phase 2 is dependent on positive results from the Phase 1 brine and sediment sampling and characterization of the basin geometry. Phase 2 of the proposed exploration program consists of deeper drilling for a more extensive characterization of the basin geometry and brine and lake sediments chemistry at depth, along with pumping tests in wide diameter holes in order to investigate various hydrological features.

All technical information in this press release has been reviewed and approved by Khurelbaatar Lamzav, P.Geo., an independent consultant to the Corporation and Ion Energy and a “Qualified Person” under National Instrument 43-101.

Directors and Management of the Resulting Issuer

Subject to applicable approvals, it is anticipated that the directors of the Resulting Issuer will be Mathew Wood, Ali Haji, Aneel Waraich, Bataa Tumur-Ochir and Enkhtuvshin Khishigsuren. Management of the resulting issuer will include Ali Haji as Chief Executive Officer and a Chief Financial Officer to be determined at a later date. Biographies for the officers and directors of the Resulting Issuer are described below.

Mr. Haji has extensive knowledge of the financial services sector after having spent over 11 years in the asset management industry performing strategic and process improvement roles. He started his career as a technology analyst at Invesco Ltd. in 2006 and advanced into various roles including technology risk, controls, program management, and process improvement with international assignments involving mergers and acquisitions in Hong Kong, U.S.A and Australia. Most recently, he was also a principal contributor to the creation of a Center of Excellence in London, England for Invesco Ltd.

Mr. Haji currently serves on the board of Antler Hill Mining Ltd. (TSXV: AHM.H) and is the CEO of Spirit Banner II Capital Corp. (TSXV: SBTC.P)

Mr. Haji attended The University of Western Ontario and holds a BSc in Computer Science.

Matthew Wood – Chairman of the Board

Mr. Wood is a mineral resource explorer and developer with over 25 years of global industry experience in mining and commodities investments.

Mr. Wood has managed investment deals in diamonds, coal, energy, ferrous metals, base and precious metals, and other commodities. His skills in technical and economic evaluation of resource opportunities have resulted in an established record of developing resource deals from early stage, to market listings and exit strategies for his investors.

Mr. Wood is CEO and co-founder of Steppe Gold Ltd. (TSX: STGO), a listed near-term gold producer in Mongolia. He was formally the founder and executive Chairman of Mongolian coal company, Hunnu Coal Limited. Hunnu Coal was IPO of the year for all sectors on the ASX in 2010, and its sale for approximately A$500M in 2011 to Banpu PCL was recognized as the Mines and Money 2012 Deal of the Year. Mr. Wood has founded and been involved in many other resource companies and investments through the years.

Mr. Wood has an Honours Degree in Geology from the University of New South Wales and a Graduate Certificate in Mineral Economics from the Western Australian School of Mines.

Mr. Waraich is the President, Chief Executive Officer and a director of Spirit Banner. Mr. Waraich is also Executive Vice-President and co-founder of Steppe Gold Ltd., a listed near-term gold producer in Mongolia, founder of ATMA Capital Markets Ltd. and ATMACORP Ltd. and a financial services professional with experience in both the asset management and corporate finance businesses.

Mr. Waraich completed his MBA from the Goodman Institute of Investment Management at the John Molson School of Business.

Mr. Tumur-Ochir has relationships at all levels of government in Mongolia and was recently appointed independent advisor to the Ministry of Mining and Heavy Industry responsible for foreign investment and promotion.

Mr. Tumur-Ochir holds a bachelor’s degree in business administration and graduate certificates in international business and marketing from Australia and Singapore.

Mr. Khishigsuren has been responsible for identifying targets and properties based on his knowledge and experience that have resulted in the discovery of several prospective gold and copper deposits in Mongolia; such as the multimillion ounce gold deposit Olon Ovoot, a large molybdenum porphyry deposit Zuun mod and the Shand copper porphyry deposit near Erdenet copper mine.

Information set forth in this news release contains forward‐looking statements. These statements reflect management’s current estimates, beliefs, intentions and expectations; they are not guarantees of future performance. Spirit Banner cautions that all forward looking statements are inherently uncertain and that actual performance may be affected by a number of material factors, many of which are beyond Spirit Banner’s control. Such factors include, among other things: risks and uncertainties relating to Spirit Banner’s ability to complete the proposed Qualifying Transaction, including those described in Spirit Banner’s Prospectus dated December 12, 2017, available on the Corporation’s SEDAR profile at www.sedar.com. Accordingly, actual and future events, conditions and results may differ materially from the estimates, beliefs, intentions and expectations expressed or implied in the forward‐looking information. Except as required under applicable securities legislation, Spirit Banner undertakes no obligation to publicly update or revise forward‐looking information.

Investors are cautioned that, except as disclosed in the management information circular or filing statement to be prepared in connection with the transaction, any information released or received with respect to the transaction may not be accurate or complete and should not be relied upon. Trading in the securities of a capital pool company should be considered highly speculative.

The TSX Venture Exchange Inc. has in no way passed upon the merits of the proposed transaction and has neither approved nor disapproved the contents of this press release.  A halt in trading shall remain in place until after the Qualifying Transaction is completed or such time that acceptable documentation is filed with the TSX Venture Exchange.

The information contained in this press release relating to Ion Energy and the Baavhai-Uul Project has been furnished by Ion Energy. Although Spirit Banner has no knowledge that would indicate that any statements contained herein concerning Ion Energy and the projects are untrue or incomplete, neither Spirit Banner nor any of its directors or officers assumes any responsibility for the accuracy or completeness of such information or for any failure by Ion Energy to ensure disclosure of events or facts that may have occurred which may affect the significance or accuracy of any such information.

Find out what industry experts say is ahead for lithium!