Boeing’s Dreamliner battery woes are casting a dark shadow on both lithium batteries and the electric car industry. However, most electric car makers use lithium-manganese batteries, which are considered much safer in terms of thermal stability. 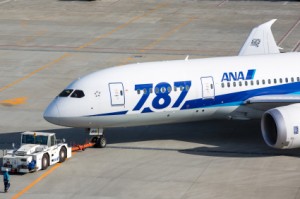 Boeing’s (NYSE:BA) Dreamliner battery woes are casting a dark shadow on the electric car industry’s reliance on lithium batteries. The safety of lithium-based batteries has been routinely called into question by critics who believe the widespread adoption of the electric car is a Jetsonian fantasy whose time will never come.

Some of those critics have further railed against the use of lithium batteries in electric and hybrid vehicles using the revelation that lithium-cobalt oxide, the type of lithium cell chemistry used in the 787 Dreamliner, is also used in the Tesla Roadster and Model S automobiles. However, most electric car manufacturers have opted to use batteries based on lithium-manganese oxide, and to a lesser degree, lithium-nickel–manganese-cobalt oxide and lithium-iron-phosphate chemistries, as laboratory testing shows these are the safest in high-temperature applications. Lithium-manganese batteries may have lower energy density, but compared to lithium-cobalt batteries, they last longer and hold up better when damaged.

The most common types of lithium-ion batteries include those mentioned above as well as lithium-nickel-cobalt-aluminum oxide and lithium titanate.

Lithium-cobalt batteries consist of a cobalt-oxide cathode and a graphite-carbon anode. They are widely used in portable electronics such as laptops, cell phones and digital cameras due to their high specific energy capacity.

However, the lithium-cobalt combination has poor thermal stability. When damaged, overcharging or operating at temperatures over 130ºC, lithium-cobalt batteries are susceptible to thermal runaway — meaning an increase in temperature causes a reaction that further increases temperatures and eventually causes a fire; that is what experts believe occurred aboard two of Boeing’s Dreamliners last month. The fleet of planes, heralded as the “the most electric … ever to fly,” use 63-pound lithium-cobalt batteries as a backup power source for several systems.

Like lithium-manganese-based batteries, lithium-nickel-manganese-cobalt batteries are considered much safer in terms of thermal stability than lithium-cobalt batteries and can be designed for either high specific power or high specific energy. Combining one-third nickel, one-third manganese and one-third cobalt at the cathode lowers raw material costs, cobalt being the most expensive of the three. However, the process for blending the materials is difficult, and if done improperly can affect battery performance. Batteries with this type of chemistry are used in hybrid and electric cars, e-bikes, power tools, portable electronics and in medical applications.

Lithium-iron-phosphate batteries are considered much safer in terms of thermal stability than lithium-cobalt batteries, and like lithium-manganese batteries, boast a long cycle life — although they do have a lower specific energy. Using nano-scale phosphate cathode material is a cheaper alternative to lithium-cobalt batteries and allows for good electrochemical performance with low resistance. Other drawbacks include reduced performance in cold temperatures and the fact that an elevated storage temperature shortens the life of the battery.  Batteries with this type of chemistry are also used in hybrid and electric cars, e-bikes, power tools, portable electronics and in medical applications.

Lithium-nickel-cobalt-aluminum batteries are less common in the consumer electronics market, but have recently come to the attention of the electric vehicle (EV) and grid-storage industries. This type of battery chemistry offers high specific energy and power densities and a long life span; however, marginal safety and high cost are complications to further development.

Like lithium-nickel-cobalt-aluminum batteries, lithium-titanate (a compound containing lithium and titanium) batteries have recently come to the attention of the EV and grid-storage industries, although they are also used in computer batteries. This type of battery chemistry has been around since the 1980s and can replace graphite in the anode of the typical lithium-ion battery. Unlike lithium-nickel-cobalt-aluminum, lithium titanate is highly safety. Batteries using this chemistry display low-temperature performance and a long life span as well as a fast recharging capability that is superior to other types of lithium batteries. Development efforts are focused on improving specific energy while lowering costs.

It’s all in the design

If lithium-cobalt-oxide batteries are so easily susceptible to thermal runaway, how has this particular chemistry not caused similar issues for Tesla’s (NASDAQ:TSLA) luxury automobiles or SpaceX’s rockets? Wired Magazine’s Jason Paur gives a good explanation: it’s all in the design.

“Tesla and SpaceX use battery packs comprised of thousands of cylindrical 18650 cells, each roughly the size of a AA battery. The cells have been refined through more than 15 years of manufacturing and use in consumer products such as laptops and power tools. Tesla and SpaceX closely control the charging, output and temperature of the cells using a sophisticated power management system,” stated Paur. However, the Dreamliner’s battery “is comprised of just eight cells housed in a single container,” a design which Tesla Motors and SpaceX CEO Elon Musk criticized in an email to Flightglobal.

“Large cells without enough space between them to isolate against the cell-to-cell thermal domino effect means it is simply a matter of time before there are more incidents of this nature,” said Musk. “Moreover, when thermal runaway occurs with a big cell, a proportionately larger amount of energy is released and it is very difficult to prevent that energy from then heating up the neighboring cells and causing a domino effect that results in the entire pack catching fire.”

Donald Sadoway, an MIT professor of electrical engineering, told Flightglobal that Tesla has properly engineered its lithium-cobalt-oxide battery “to prevent the domino effect, while Boeing evidently doesn’t have that engineering.”

This week, Musk announced via Twitter that he is talking with the chief engineer of Boeing’s 787 Dreamliner, Mike Sennett, reported Reuters. The post followed a January 18 message from Musk to Boeing intimating that “Tesla & SpaceX are happy to help with the 787 lithium ion batteries.” No word yet from Boeing on whether or not the company will take advantage of Musk’s offer.