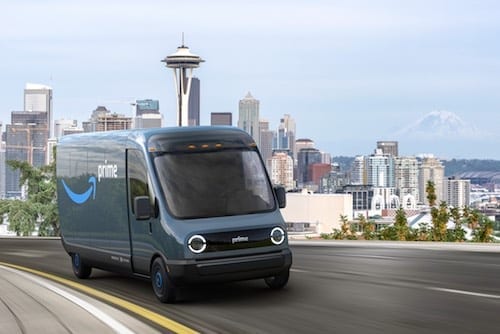 Privately held Rivian started throwing weight around in 2018 with plans to square up to Tesla with two electric models: an SUV and a pickup.

The privately held Rivian started throwing weight around in 2018 with plans to square up to Tesla (NASDAQ:TSLA) with two electric models designed to appeal to the two most popular segments in North America: SUVs and trucks.

Through 2019 the company has so far benefited from over US$1 billion in investment, with the Ford Motor Company (NYSE:F) plowing US$500 million into the company so it could get a look-in at its EV tech, and Amazon previously investing US$700 million in early 2019.

The news that Amazon would be ordering 100,000 fully electric delivery vehicles from Rivian was made as part of an announcement on the company co-founding an initiative called the Climate Pledge, with a goal for the company to meet the Paris Agreement a decade early.

“We’re done being in the middle of the herd on this issue — we’ve decided to use our size and scale to make a difference,” said Jeff Bezos, Amazon founder and CEO.

“If a company with as much physical infrastructure as Amazon — which delivers more than 10 billion items a year — can meet the Paris Agreement 10 years early, then any company can.”

In the announcement, the Amazon CEO talked up the credentials of Rivian, leaning in to Amazon’s significant investments into the company based out of Plymouth, Michigan.

There are plans for delivery vehicles made by Rivian to be humming around North American roads as early as 2022, and all 100,000 to be making deliveries by 2030.

According to Amazon, using the all-electric vehicles will save 4 million metric tonnes of carbon per year by 2030.

Rivian currently has exactly zero electric vehicles on the road in private hands as of September 2019, and its original plans consist of making deliveries of its R1T pickup and R1S SUV in late 2020.

The Rivian vans, which had previously not been reported on, will share technology with the R1T and R1S models, and will be assembled at Rivian’s plant in Normal, Illinois, which the company purchased from Mitsubishi Motors America (OTC Pink:MMTOF,TSE:8058) in 2017.

Rivian gets its batteries from Korean battery manufacturer LG Chem (KRX:051910), which has been ramping up its battery production recently, and has a joint venture with Chinese cobalt miner-refiner Huayou Cobalt (SHA:603799) to produce cathode materials.

9 Top Iron-producing Countries
How Direct Lithium Extraction Can Drive US Lithium Production
How is the S&P/TSX Composite Index Weighted?
Could Cobalt-free Batteries Dominate the EV Space?

One response to “Amazon Orders Fleet of 100,000 Electric Delivery Vans from Rivian”