Zinc prices hit a one-week low of $3,000 per tonne last week, but have bounced back since then due to stabilization in the markets.

Zinc prices rebounded on Monday (September 25) from last week’s one-week low as markets stabilized.
Three-month LME zinc closed 2.1 percent higher, at $3,096 per tonne, bouncing back after touching a low of $3,000 on Friday (September 22).
“We are trying to establish floors now that we are down from recent highs,” said Robin Bhar of Societe Generale (EPA:GLE). “We are back at what people would perceive as closer to fair value so we should be bottoming out.”
Although zinc rose on Monday, its gains were somewhat dampened by a firm US dollar — that’s because a stronger greenback makes commodities priced in dollars more expensive for investors using other currencies. In addition, geopolitical tensions turned investors toward safe-haven assets like gold and silver and away from riskier assets such as base metals. 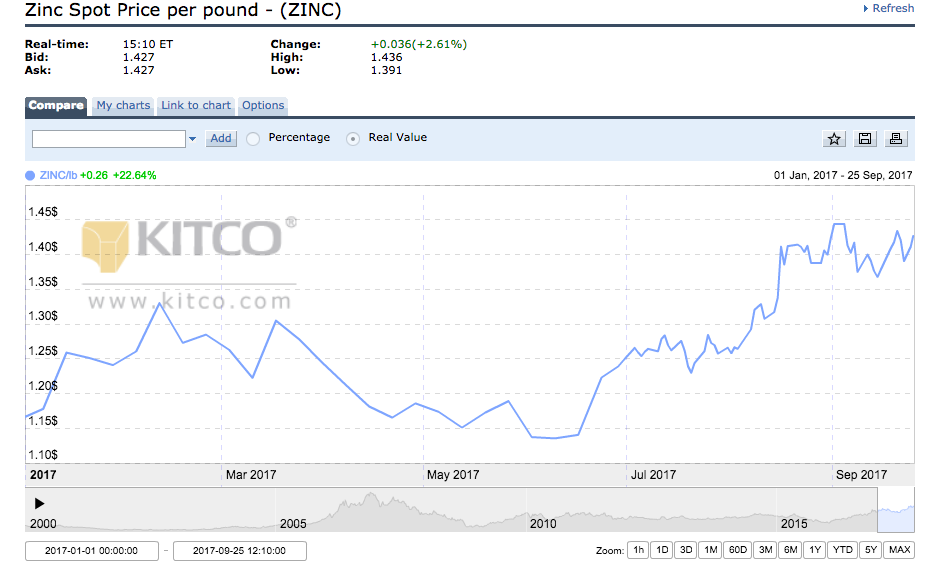 Chart via Kitco.com
Overall, zinc prices have been surging since January, and are up more than 20 percent since the beginning of the year. Prices hit their highest point in 10 years on August 16, breaking the $3,000 mark, and have been holding near that level since then.
Shrinking warehouse stocks and China’s strict environmental policies have supported prices so far this year. On-warrant stocks of zinc available to the market have fallen by more than 50 percent in 2017, and CRU analysts expect global warehouse stockpiles to fall further this year. They believe they will reach levels that have historically seen a strong price reaction by 2018.
Meanwhile, Chinese environmental inspectors have targeted zinc mines in Sichuan province, restricting or stopping some production, according to Chinese consultancy Shanghai Metals Market.
Most recently, cities in Anhui province have issued plans to curb production in the steelmaking, non-ferrous smelting, cement and coal-fired power sectors.
“Steel production is another particular target of Chinese environmental regulators, and concerns over steel supply constraints have further boosted the price of zinc, which is used to galvanize steel,” FocusEconomics analysts said in their last report.
Looking ahead, firms polled by FocusEconomics estimate that the average zinc price for Q4 2017 will be $2,843. The most bullish forecast for the quarter comes from BMO Capital Markets, which is calling for a price of $3,527; meanwhile, Euromonitor International is the most bearish with a forecast of $2,309.
Don’t forget to follow us @INN_Resource for real-time news updates!
Securities Disclosure: I, Priscila Barrera, hold no direct investment interest in any company mentioned in this article.