What’s the zinc outlook for 2020? Experts and CEOs share their thoughts on what’s ahead for the base metal next year.

It was another disappointing year for zinc bulls, with prices ending 2019 at almost the same level as when the year started.

Following a rally in Q2, prices performed in a downward trend for most of the second half of 2019.

With the year now almost over, the Investing News Network (INN) caught up with analysts, economists and executives from mining companies to find out what’s ahead for zinc supply, demand and prices.

Zinc outlook 2020: The year in review

Zinc reached its highest level of the year in April, when it broke the US$3,000 per metric ton mark.

According to FocusEconomics economist Javier Colato, the April spike in pricing happened primarily due to tightened supply.

“Stockpiles of the base metal at London Metal Exchange (LME) warehouses fell to their lowest levels in over two decades during this period, while inventories at the Shanghai Futures Exchange also remained historically low. … Furthermore, Chinese production remained subdued, largely reflecting stricter environmental regulations faced by smelters, thus accentuating the supply shortage in the market.” 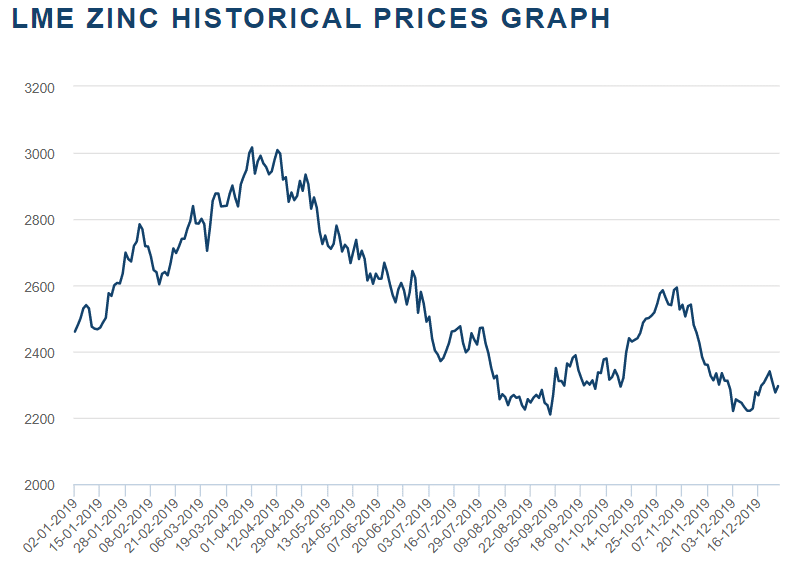 One of the key trends in the zinc market this year has been the recovery in Chinese refined zinc output, according to CRU Group Senior Analyst Helen O’Cleary.

“For the last seven years, annual global zinc consumption has been met in full only with a drawdown of exchange and unreported stocks,” he said. “Refined inventory is now very low; there is little scope for further substantial drawdown and consumption can only be met by increased smelter output.”

The trade war made 2019 a tough year for most base metals, as weak global and domestic demand weighed on industrial activity in China.

“Moreover, prospects of rising global mined output have further supported the bearish sentiment among market participants, despite low stockpiles at the LME warehouses, which have supported prices in recent months,” analysts at FocusEconomics said in their latest report.

It was also a disappointing year for junior miners, which found it challenging to get investors interested in base metals.

“We do believe that the tide is turning and that the interest in commodities is growing,” Patrick Soares, president and CEO of Foran Mining (TSXV:FOM), said. “Smart investors are making investments now and (are) positioning themselves for the next few years.”

Brandon Macdonald, CEO and director at Fireweed Zinc (TSXV:FWZ), expected a modest improvement in the space in 2019 given dwindling inventories.

“However, I was proven incorrect as sky-high spot treatment charges and a soft price for physical metal meant reduced investor interest,” he said.

Echoing his sentiment was Peeyush Varshney of ZincX Resources (TSXV:ZNX), who said there was a complete lack of interest by the investor community this past year.

“As always, however, in due course this changes, and bull markets are created again in the resource sector,” he said. “So there is an opportunity right now to buy shares in very high-quality junior exploration companies at bargain prices — in anticipation of very high returns once the sentiment changes positive.”

Zinc outlook 2020: Mine supply up, demand down

As 2019 comes to a close, CRU Group still expects a concentrate surplus this year after ex-China refined zinc output underperformed for a variety of reasons. Additionally, the refined market is expected to remain in deficit despite weaker-than-expected demand.

“Next year we expect both concentrates and metal to be in surplus due to a significant increase in mine supply and continuing weak demand,” O’Cleary said.

For the expert, record-low LME stocks had the biggest single impact on price and spreads this year, pushing zinc’s price into backwardation for most of the year. This has skewed market fundamentals and made the physical market look tighter than it is.

“Investors should keep eyes on the Chinese (arbitrage) in the new year — if this becomes positive for exports from China then it will be very bearish for prices,” she said. CRU Group forecasts that zinc will average US$2,180 next year.

O’Cleary also suggested that investors watch the ramp up of New Century Resources’ (ASX:NCZ,OTC Pink:NCRE) New Century tailings operation; Vedanta’s (LSE:VED) Hindustan and Gamsberg zinc operations; potential community issues at the Peñasquito mine, which could have a significant impact on production; and any delay in the restart of American Zinc Recycling’s Mooresboro smelter, which could exacerbate regional tightness to the US refined market.

In terms of price, FocusEconomics analysts expect zinc to gain some ground amid continued low inventories in the global market.

“However, muted global industrial production and an uncertain economic backdrop remain key downside risks to the outlook,” they said.

Looking ahead, Foran’s Soares expects a slow rise in interest in base metals, driven by fiscal spending by governments in the developed world.

“2020 is going to be the start of a new secular bull market for commodities,” he said. “The next decade is going to see large investment in the base metals space.”

“The next tier where investors should position themselves is with companies such as Foran, which are developing zinc-copper deposits,” he said. “Here the potential returns are multiples of their investment.”

Adding explorers to one’s portfolio is also possible, but investors need to choose carefully, he added.

Meanwhile, ZincX’s Varshney said investors should look for companies that have significant deposits that would be of interest to mid-tier and major mining companies.

“So the deposit should be large-scale, high-grade, in a good mining jurisdiction and have significant exploration potential (further upside). If a project doesn’t have all of these things, in all likelihood it won’t be of interest to a major mining company, and most likely the project will never be developed.”

After putting out a maiden preliminary economic assessment last year, Varshney said his company’s flagship Akie property is now being looked at by several mining groups as a potential development asset.

For his part, Fireweed’s Macdonald said 2020 could be a mixed year for zinc.

“On the one hand, we may see a supply surplus of physical metal, which is bearish, but on the other hand, some producers are teetering on the edge of oblivion even at these prices,” he said. “If that surplus leads to a price reduction, which leads to mine closures, it could be interpreted as a bullish sign and a new floor in pricing.”

He suggested investors tune out the noise of daily and even monthly price movements and reflect instead on long-term consensus and the availability of quality projects.

“Dwindling inventory is a problem that can be pushed out only so long,” he added.

Fireweed is developing the Macmillan Pass project, and, due to some recent results, there is potential for a resource expansion.

Editorial Disclosure: Fireweed Zinc and Foran Mining are clients of the Investing News Network. This article is not paid-for content.