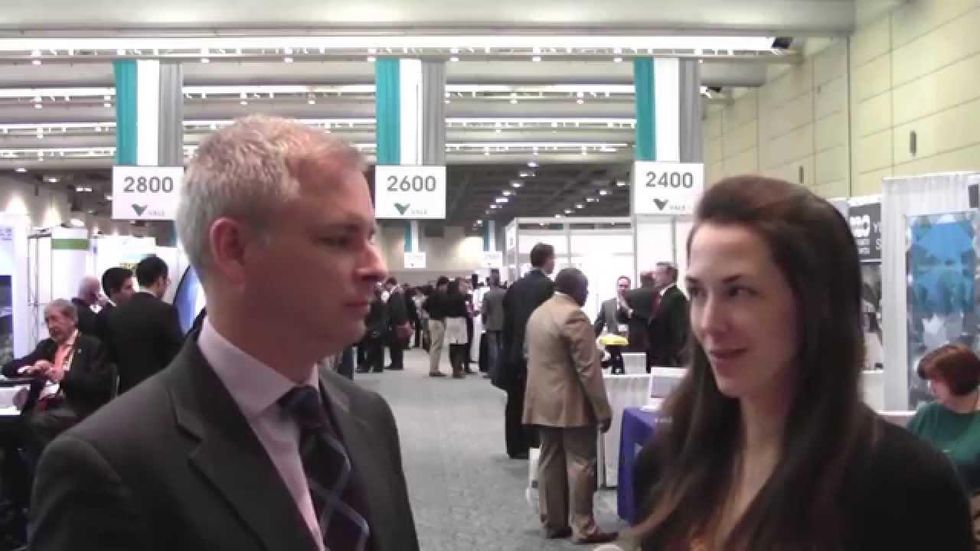 “There are insufficient advanced-stage projects to meet demand going forward,” said Wood Mackenzie’s Jonathan Leng at PDAC. Furthermore, many of them are controlled by juniors, which often “have limited ability to finance, especially now with subdued zinc prices.”

As those with even a passing interest in base metals likely know, expectations are high for zinc. For well over a year now, market watchers have been making the case that its prospects look good in large part because big mines are closing with not enough new supply set to come online.

And indeed, zinc was a hot topic at PDAC this year, with speakers and attendees alike coming out to express high hopes for the metal. Scotiabank’s Patricia Mohr spoke highly of the base metal in her talk, and in conversation with Resource Investing News Stefan Ioannou of Haywood Securities and Jonathan Leng, who’s Wood Mackenzie’s manager, zinc, lead and gold mine supply, also weighed in positively.

Leng’s video interview with Resource Investing News is embedded here, but for more of his insight on zinc, read on for an overview of his PDAC presentation.

As mentioned, zinc’s positive price outlook is largely a supply-side story, and unsurprisingly Leng took the time to give a brief overview of what’s going on with zinc supply.

The analyst pointed out that there are “significant mine closures coming up,” and those will be “combined with limited supply growth at existing mines.” And while Leng admitted that “some market commentators have said recently that this story has been around awhile and it never seems to happen,” he also emphasized that he’s confident in zinc because the supply gap “is bigger and closer than it normally is.”

In terms of where that rise in demand will be coming from, Leng said that China will be a big contributor. The Asian nation currently accounts for about 48 percent of global zinc demand, and that amount is forecast to increase to around 52 percent by 2020. All in all, Wood Mackenzie is calling for worldwide annual zinc consumption growth to rise 4.1 percent to year til 2020, which “equates to an incremental annual increase in zinc consumption of around 630,000 tonnes per year.”

How did we get here?

Perhaps the most interesting part of Leng’s talk was his explanation of how exactly the world got into the situation outlined above. All in all, it seems that profitability is a key consideration.

The analyst explained that before 2006, “the industry as a whole only made modest returns,” with the result being “limited exploration spending and also a reluctance to invest in zinc mines.” Major miners in particular made themselves scarce due to “insufficient opportunities of suitable size” — that’s in contrast to the late 1990s and early 2000s, when multiple large zinc mines were coming online or being expanded.

Those factors, of course, have created project pipeline issues that won’t be easy to remedy given that “it currently takes around 15 years from discovery to production.”

That said, Leng was careful to point out that a shortage of zinc projects isn’t the issue — in fact, Wood Mackenzie has “identified 31 … projects that are likely to be developed in the next five years, plus additional projects in China and 400 possible projects that could come in past 2020 to fill the supply gap. There are also 500 prospects which are currently early stage.”

So what’s the problem? According to Leng, it’s the level of “development and the quality of these projects.”

Essentially, he said, there will be some smaller mines opening from 2015 to 2016, with the Dugald River and Gamsberg projects coming online in 2017 and 2018, respectively. “Assuming all these probable projects were brought onstream they could deliver around 700,000 tonnes per year in zinc concentrate by the end of the decade,” said Leng. “But we are going to need more than that.”

And while there are other potential projects that, if commissioned on time, could bring 2.2 million tonnes per year online by 2020, Leng believes “there are technical and political issues with many [of them] that could very well delay start up.”

Put simply, “there are insufficient advanced-stage projects to meet demand going forward,” and many of them are controlled by juniors. Critically, juniors not only often lack the experience to move their projects into production, but also “have limited ability to finance, especially now with subdued zinc prices.”

While all of the factors mentioned above translate into a good long-term story for zinc, Leng admitted that Wood Mackenzie’s “forecast is for it to be a little dull this year.”

That said, he did note that his firm’s expectation is that “mine growth and restricted supply will draw down global inventories to 50 days in 2016.” Together, those factors will “provide a fundamental basis for a sharp rise in the zinc price to $3,600 per tonne, or $1.62 per pound,” said Leng.

Further into the future, around 2017 to 2018, refined zinc inventories will fall “to particularly low levels,” potentially pushing the zinc price to a peak of $4,000 per tonne, or $1.84 per pound.

Overall, Wood Mackenzie is calling for “a balanced market trending to deficit” over the next decade — that’s in contrast to the “market trending to surplus” seen historically. The result will be a higher long-term price of $2,800 per tonne, or $1.30 per pound.

Leng believes that ultimately when those higher prices come projects will be spurred forward, and concluded, “from rags a decade ago, hopefully the riches will be coming to the miners for the next couple of years.”

Jonathan Leng: ‘Now’s a Good Time to be Owning a Good-quality Zinc Project’