What’s in store for nickel in 2019? Experts share their nickel outlook, from supply and demand dynamics to price predictions.

Nickel was as hard hit as other base metals in 2018 as investor sentiment bled the markets, leading to lower prices even as demand increased.

Analysts predict that nickel prices will stay low through to 2019, barring any significant improvements in the seemingly deteriorating US-China trade rhetoric.

Additionally, the much-touted battery metal boom might well not happen in any meaningful way for nickel in the near term, as markets learn more about just how far the electric vehicle (EV) industry has to go, and how quickly consumers need to adopt new technology for the boom to materialize.

New developments throughout Australia and headaches for miners in the Philippines dominated supply-side news, while demand meant that over the year stockpiles were drawn down.

As seen on the chart below, nickel started the year pretty well, gaining 14 percent in value through the first half of the year, rising to a high of US$15,745 per tonne in early June. 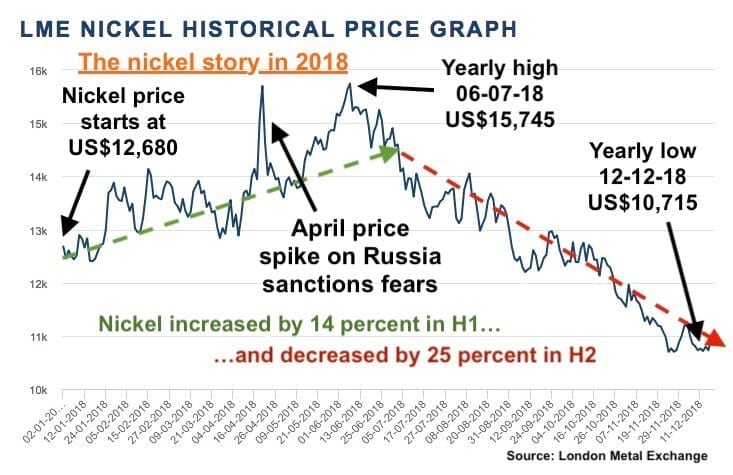 In June and July, the trade war got down to business though, triggering a sustained fall in the metal’s value through to the end of the year. Nickel was not alone.

But it wasn’t just a US and friends vs. China tango — nickel was also the subject of anxiety about US sanctions against Russia in April, which forced prices higher.

While no sanctions were placed on major Russian nickel producer Nornickel (MCX:GMKN), the risk of America broadening its attack on Russian businesses made investors wary, accounting for the spike seen on the chart in April.

The US had previously put sanctions on Russian aluminum producer Rusal (HKEX:0486), causing that company’s shares to collapse more than 69 percent over a week earlier that same month.

Nickel miner Horizonte Minerals (TSX:HZM) told the Investing News Network that while nickel prices have risen on 2017’s momentum and fallen on 2018’s drama, the metal is still a solid investment.

“The overriding nickel fundamentals with demand increasing and limited supply coming online should continue pushing the nickel price upward over the medium [to] long term,” the company said, reflecting the commonly held sentiment that for nickel it is a waiting game for the time being.

Questions about the future of nickel supply have centered around a long-touted EV demand boom as consumers embrace EVs, but according to analysts the primary consumers of nickel remain industrial.

“Stainless steel will continue to be the primary first use for nickel for a long time to come,” said research director at Wood Mackenzie, Andrew Mitchell.

Nobody is denying increased demand from EVs is looming though — major and junior mining companies are scrambling to bring production online to meet an anticipated peak, with dozens of companies in Australia developing projects (read more here). And news from the world’s second-largest nickel producer, the Philippines, always gets media attention for the risks raised by its anti-mining president.

In their last commodities forecast report for 2018, analysts at FocusEconomics note that increased output from Indonesia and the Philippines has been pushing prices down, and plans to build a new Class 1 nickel-cobalt refinery in Indonesia are ensuring any bullish attitudes to the metal are tempered.

The company with those plans, China’s Tsingshan (the world’s largest stainless steel maker), announced that the refinery will be producing battery-grade nickel and cobalt.

Besides the trade war, Mitchell said that “sentiment and perception of the prospects for nickel were also adversely affected by the announcement by Tsingshan.”

Tsingshan’s refinery is set to produce 50,000 tonnes of nickel annually.

“While treated with some skepticism, the aforementioned announcement by Tsingshan and the view that this might precipitate another NPI (nickel pig iron) wave of production growth continues to be a significant talking point,” said Mitchell.

“Had any other company made the announcement it would have essentially been ignored, but since Tsingshan has a remarkable track record of delivering what its states it will do, the ambitious plan cannot be dismissed out of hand.”

On the LME, nickel stockpiles fell through 2018 — starting above 350,000 tonnes and falling to 209,000 tonnes by late December — a loss of around 40 percent year-to-date, indicating a supply shortfall.

Horizonte Minerals blames “political events” for making the nickel market a tougher one in 2018.

“Unfortunately, political events, including trade impediments between some of the world’s largest economies, have resulted in a general slowdown globally, with nickel weakening along with almost all other metals in the second half,” the company said.

“This despite a sustained drawdown of stocks and a very positive supply/demand outlook, reflected in the market’s consensus forecast, which expects much higher prices in the years ahead.”

As mentioned, the looming EV boom and increased demand for nickel is a talking point for basically everyone operating in the nickel space — but the conversation has moved on to when it will actually actually materialize.

Brian Leni of Junior Stock Review said that no matter what, electrification is in the cards.

“This revolution in human history will be led by EVs and will have a tremendous impact on the battery metals market,” he explained.

“In saying this, given the current and future chemistries used in EV batteries … nickel plays a major role. While I don’t see this staying this way forever, I would say that the next 10 to 12 years of battery demand is very bullish for nickel,” said Leni.

He continued, “the question that then needs to be asked is, what will the EV adoption rate be, moving forward? It is a hard question to answer, but one thing to keep in mind is countries around the world are incentivizing the adoption of EVs with rebates and instituting taxes on carbon emissions. I believe these incentives and penalties will only increase with time, making me more optimistic of a higher growth rate in the global EV market.”

Mitchell said that the market’s understanding of nickel and its use in EVs is maturing, lending an explanation to why its value is falling right now, rather than going up.

“There is now more understanding and a realization that this is not a near-term story but more a mid- [to] long-term growth area. In addition, there is also some caution as to whether the potential requirements for nickel and indeed cobalt can be met longer term. The development of ‘new’ battery technologies is likely to ease this somewhat (e.g. solid-state batteries), but how and when is still a point of conjecture,” he explained.

Meanwhile, Stefan Ioannou of Cormark Securities said while hype around EVs (and supply troubles in the Philippines) caused nickel to go on a run in 2017, the reality of timing brought an end to that party.

“I think the reality in the case of the battery narrative is that yes, I think nickel at some point will have a place to play there, but it’s a few years out yet in terms of actual consumption of the metal in that space. So I think it may have been a bit premature, and I think the market has recognized that as well.”

Harking back to supply-side considerations, Ioannou said that that demand will come up against tightness in the pipeline due to physical limitations in mining.

“A lot of [nickel] is coming from lateritic ore, which is typically very capital-cost intensive and can be very challenging from a technical and metallurgical point of view … the preferred way to get nickel out of the ground is in a form of a sulfide deposit, but there haven’t really been any major new significant sulfide discoveries in the last decades. Probably the last biggest one of real memory would be Voisey’s Bay.”

“Our outlook for next year is one of a similar price to the current year as a consequence of the ongoing trade dispute and the potential impact of Brexit,” said Mitchell.

“Should the trade dispute be resolved sooner rather than later and/or China provides a new stimulus package for internal growth, then that would be positive for the price outlook,” he added.

Leni said that he sees higher prices in 2019 for nickel.

“Considering the entire nickel market is currently 2 million tonnes, and given the current supply and demand fundamentals and the time and cash needed to find, develop and produce nickel sulfide projects, you have to ask yourself, where is it going to come from?” he said.

“I’m bullish on nickel and provided there is resolution to the US and China trade war, think 2019 is going to be a good year for the nickel price. How good? I believe there’s a good chance that the nickel spot price will challenge US$8 per pound.”

Analysts polled by FocusEconomics also forecast higher prices — though not as high as Leni’s number.

Panelists see nickel prices recovering considerably over the next 12 months amid a tight market. Downside risks — namely, geopolitical tensions and the ever-present threat of a hard landing for the Chinese economy — are expected to persist in the short term.

“Over the coming years, intensifying EV-battery output spells good news for demand and should support prices. Our analysts see nickel prices averaging US$13,904 per metric ton in Q4 2019, before edging lower to average US$13,846 per metric ton by Q4 2020,” the analysts said.

At Horizonte Minerals, a company with numerous nickel assets in Brazil, the sentiment is the same.

“Given the outlook for EVs and continued strength in the stainless steel market, we expect prices to begin to better represent the underlying market fundamentals of growing demand and a need for increased prices to incentivize new sources of supply.”