By Leia Michele Toovey- Exclusive to Lead Investing News
The Fed’s announcement to purchase treasuries sent lead and zinc on their largest ascent in two months. Fed officials voted on March 18 to buy Treasury and mortgage bonds in an effort to revive America’s economy, lifting stocks as well as commodities. Copper, zinc and aluminum all […] 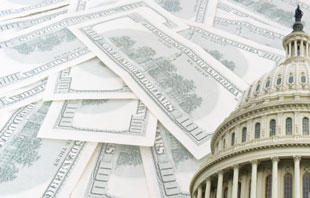 The Fed’s announcement to purchase treasuries sent lead and zinc on their largest ascent in two months. Fed officials voted on March 18 to buy Treasury and mortgage bonds in an effort to revive America’s economy, lifting stocks as well as commodities. Copper, zinc and aluminum all rose more than 6 per cent in London.

“The Fed’s surprise decision to announce quantitative easing, the subsequent dramatic weakening of the dollar and the move up in equity markets all point to a recovery in risk appetite,” Barclays Capital announced in a report. “The inflationary effect of the Fed’s decision will support commodities,” the bank added

The fed’s announcement was negative for the greenback, sending the US dollar Index on track for its worst week since September 1985. The dollar fell an additional 0.4 per cent, and has dropped every day since March 9, sliding a cumulative 6.4 per cent. Declines by the greenback reduce the cost of dollar- denominated commodities for holders of other currencies.

Metals are unlikely to sustain their gains, according to Barclays, because “an awful lot of this rally has been driven by factors including consumer restocking, Chinese buying and hedge fund short-covering.” Zinc added 0.9 per cent to $1,275 a tonne, paring a gain as far as $1,308, the highest intraday price since Jan 14. Lead fell 0.5 per cent to $1,318 a tonne

The consensus forecast is that short-term zinc prices will remain weak. Continued production is creating a surplus of 210,000 metric tonnes of metal overhanging the market. Analysts at Abare (the Australian Bureau of Agricultural and Resource Economics) also suggest that zinc demand will recover in 2010 in line with the global economy and come close to metal supply. Importantly, they say “growth in supply is expected to be relatively weak because of mine closures, project delays and project abandonment’s in late 2008 and 2009.”  They forecast that the 2010 zinc price could rise to  $0.70 per lb.

The lead market is in the same situation, with production exceeding demand. Lead prices have averaged  $0.52 per lb so far this quarter, as compared with $0.56 in the fourth quarter of 2008, according to International Lead and Zinc Study Group data. Despite refined lead metal output falling in Europe, Canada, Japan and the U.S., global production ramped up by 6.1 per cent as a consequence of higher Chinese production. In a separate report, the World Bureau of Metal Statistics says lead stockpiles in London Metal Exchange warehouses increased again in January. The WBMS report says “planned output reductions haven’t yet affected world output” of smelted metal.

China’s Shaanxi province is stepping in to help out four local smelters by buying 77,000 tonnes of refined lead and zinc. Shaanxi Nonferrous Metals Company, owned by the Shaanxi government, has agreed to pay 11,200 Yuan per tonne to buy refined zinc and 12,900 Yuan a tonne for refined lead, higher than 10,750 Yuan and 12,600 Yuan, respectively, traded in Shanghai last Thursday. Purchases will be from smelters suffering from weak demand. The State Reserves Bureau, Beijing’s commodity buyer, bought 159,000 tonnes of zinc from Chinese smelters this year.

According to  media reports, Peter R. Jones, is vying  to get his old job as CEO of Hudbay Minerals back; contingent on top shareholder SRM Global Master Fund succeeding in replacing the company’s board.  Mr. Jones was replaced by Allen Palmiere in January 2008. Mr. Palmiere stepped down after a botched attempt to take over Canadian rival Lundin Mining. The deal fell apart after the Ontario Securities Commission decided HudBay would need shareholder approval to issue the stock it was using to buy Lundin. The bid was against stockholder’ wishes, and led to SRM claiming their preference in getting the old leader back. “The stockholders have lost faith and there’s been a revolt,” Mr. Jones said. “They want the board 100 percent replaced.”

Acadian Mining Corporation (TSX: ADA) announced  that it has reached agreement with Golden River Resources Corporation to complete a private placement of up to 338,111,334 common shares for gross proceeds to Acadian of up to Cdn $10 million. The Offering will likely close in two or more tranches. Acadian will seek approval from its shareholders at its next annual meeting.  The proceeds of the Offering are to be used by Acadian for operational overheads, the advancement of Acadian’s gold properties and the discharge of the creditor’s of Acadian’s wholly-owned subsidiary, ScoZinc Limited, all in accordance with a plan and budget to be approved by Golden River.