Iron industry veteran Tayfun Eldem on what Alderon’s recent offtake agreement with a Glencore subsidiary means for the company. 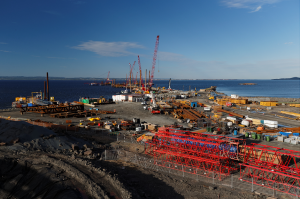 Last week was a big one for Canadian iron ore development company Alderon Iron Ore (TSX:ADV). The company announced on Tuesday that its affiliate, the Kami Mine Limited Partnership, has secured an offtake agreement with a subsidiary of Glencore (LSE:GLEN). That’s important as it means 100 percent of initial production from the Kami project is now committed to end users.

Led by an experienced management team that includes iron industry veteran Tayfun Eldem, Alderon has been busy working towards developing its Kami project in the Labrador Trough. Results from a feasibility study for Kami were announced back in January 2013, and they indicate a mine life of 30 years with a concentrate production rate of 8 million tonnes per year grading 65.2-percent iron. Capital costs sit at US$1.27 billion, excluding sustaining capital.

This year, Alderon has gained approval for its environmental plans, signed a life cycle services agreement with mining equipment provider Metso Minerals Canada and completed all required engineering work to begin construction at the mine site. The company is now looking to conclude financing for Kami and commence construction.

To be sure, this week’s agreement with Glencore will help in that regard. Eldem told Iron Investing News, “this is a significant achievement for us in the sense that we are looking to conclude the financing for our project, and having 100 percent of production pre-commited sends a very strong signal of confidence to potential lenders.” The CEO explained further, “lenders at the end of the day want to know that they can get paid back if they loan money, and the only way a producer is going to be able to pay them back is through the sale of their product and the revenue that it generates that in turn allows them to pay down their debt.”

With its second offtake in place, Alderon certainly has the sale of its product sorted. “Now, rather than having the uncertainty of whether we can sell the remaining 40 percent, that’s completely gone. We’ve taken away all of that uncertainty,” said Eldem.

Alderon previously secured an agreement with Hebei Iron & Steel Group (SHE:000709) for production from the Kami mine in 2012, and Glencore will now take on the remaining 40 percent of actual and annual production from Kami. The term for the agreement will continue until the Kami Mine Limited Partnership delivers 48 million tonnes of iron ore concentrate to Glencore; that is expected to happen 15 years after commercial production commences.

Securing offtake agreements is an important part of Alderon’s strategy, and the company has been working hard to get them. “We have been working on a second offtake partner ever since we concluded the first offtake arrangement with Hebei Iron & Steel Group back in 2012,” Eldem said. “In fact, the day after the Hebei agreement was signed and disclosed to market, we started looking for another offtake partner, and as part of that process, we’ve been working with steelmakers out of Japan, Korea and Taiwan and China, as well as global traders like Glencore.”

Alderon entertained “a number of different iterations with potential suitors” before eventually settling on Glencore as a partner following a competitive selection process.

When asked how the company was able to generate interest from potential offtake partners, Eldem stated, “we’ve been at this for well over two years. Interest has almost generated itself through introductions at conferences, based on our knowledge of the industry and industry contacts.” To be sure, the company’s experienced management team appears to have garnered confidence from significant players.

“Of course having a name like Glencore interested in working with Alderon means a lot to Alderon in the sense that it speaks highly of the product quality and the project quality. So from that perspective, there’s a very strong vote of confidence all around,” Eldem said.

Interested investors will definitely want to keep an eye on how things progress at the Kami project. In terms of what the future holds for the iron market and iron ore miners, Eldem believes long-term fundamentals are robust. He stated, “this is still an environment that is very supportive of new projects, provided that the new projects coming along are cost competitive.”

Notably, Alderon remains poised to weather the current influx of iron ore streaming onto the market from the big three — Rio Tinto (NYSE:RIO,ASX:RIO,LSE:RIO), Vale (NYSE:VALE) and BHP Billiton (NYSE:BHP,ASX:BHP,LSE:BLT) — as it has a very high-quality deposit. “Not every tonne of mined ore is created equally,” Eldem pointed out. “What I mean by that is we have a very strong value-use proposition as a result of the quality of the product that we bring to market. We believe very strongly that there is a niche market for it, especially as the end users become more discerning and look for cleaner input into their blast furnaces.”