Bryce Bradley, Thunderstruck’s President/CEO, stated “With a proven high-grade zinc/copper target that was drilled over 40 years ago, this new gravity survey already shows 1.4km length strike potential of the favourable host structure.” She continued, “The goal of the current drilling campaign is to help confirm the potential of this exciting prospect.”

In addition, multiple unexplained >300 kg/m3 density contrast gravity inversion anomalies occur along strike over a combined distance of approximately 1.4 km northeast of the Korokayiu deposit, coincident with the mapped continuation of the Korokayiu VMS horizon (Figure 2). These anomalies are associated with anomalous historical zinc in trench rock and soil geochemical responses. In addition, a single, circa 1981, shallow 26-metre vertical core hole (W1500/9) drilled for the purpose of geologic mapping control was collared approximately 60 metres east of one of the anomalies and intersected intensely clay sericite-altered dacite rock containing 2-3% pyrite-sphalerite-chalcopyrite mineralization over a 0.9-metre interval at a depth of 16.2 metres.  The true width of the interval is unknown and there is no record of the core being submitted for assay. 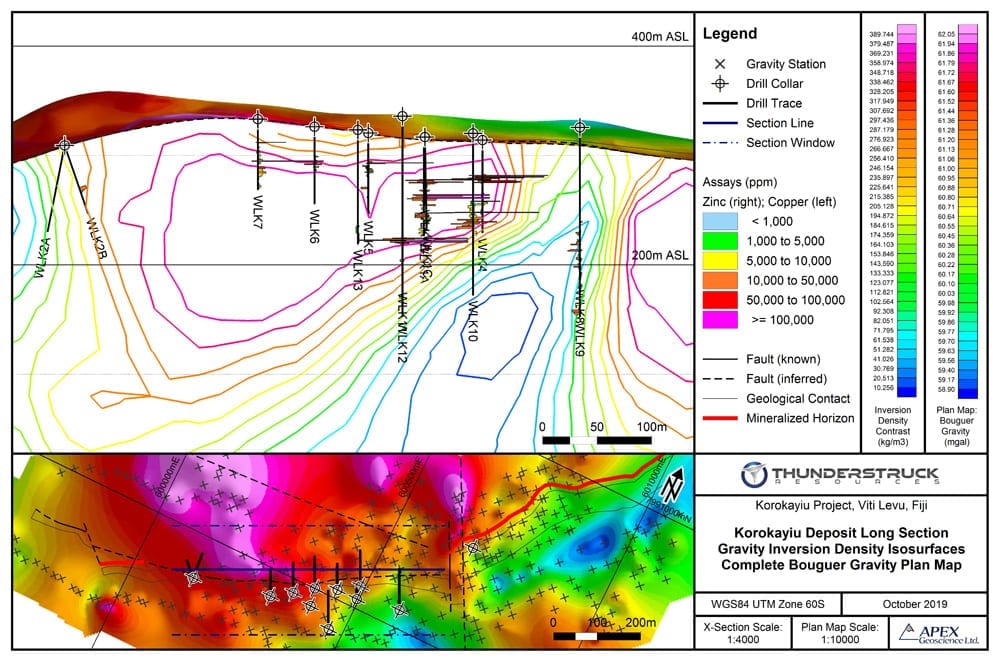 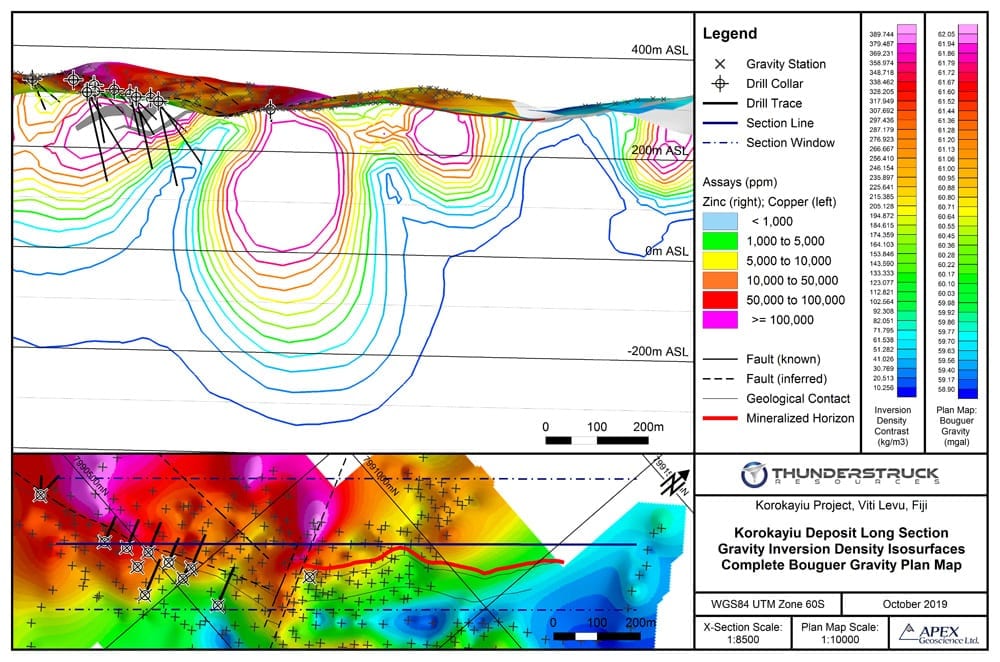 Thunderstruck is also pleased to provide an update on the status of the 2019 diamond drill program.  The third drill hole of the program recently commenced and logging and sampling of the drill core at the Korokayiu field camp is underway in preparation for shipping of samples for analysis.

Thunderstruck Resources is a Canadian mineral exploration company that has assembled extensive and highly prospective properties in Fiji on which recent and previous exploration has confirmed zinc, copper and precious metals mineralization. The Company provides investors with exposure to a diverse portfolio of exploration stage projects with potential for zinc, copper, gold and silver in a politically safe and stable jurisdiction. Thunderstruck trades on the Toronto Venture Exchange (TSX-V) under the symbol “AWE” and United States OTC under the symbol “THURF.”

Kristopher J. Raffle, P.Geo. (BC) Principal and Consultant of APEX Geoscience Ltd. of Edmonton, AB, is a qualified person for the project as defined by National Instrument NI 43-101. Mr. Raffle has reviewed and approved the portion of the technical content of this news release as it relates to Korokayiu VMS prospect.