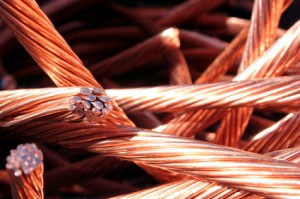 Copper had a good run in September. Now, the market is looking for real demand to outstrip supply and support the case for bringing new mines to production. Even though copper prices are down from their four-and-a-half-month peak of $8,422 on September 19, analysts agree that copper supply will fall short of demand, which bodes well for copper prices and junior copper companies.

Commodities dealer Jefferies Bache is predicting an “extended period of rising copper prices,” on the back of “very significant” copper deficits in the years after 2015. And while Haywood Securities expects “near-term volatility” in copper prices, it said US and Chinese government and central bank action to stimulate the economy has “raised the floor for base metal pricing.” It also said supply will be tight as grades are declining and large copper producers are cutting costs instead of building large new copper projects, Mineweb reported.

COMEX copper for December delivery was flat in midday trading in New York Thursday at $3.7840 per pound.

In the last month, Copper Fox Metals (TSXV:CUU) has received encouraging news about its deposit in British Columbia.

Copper Fox shares last week moved above their 200-day moving average of C$1.19. CEO Elmer Stewart said the company is in the final stages of completing the feasibility study for its copper-gold–molybdenum–silver Schaft Creek project in BC, describing it as “the most significant event” in the company’s eight-year history.

Citing Brook Hunt in an August presentation, Copper Fox said that to meet global demand, an additional 12.7 million tonnes of copper production per year will be necessary by the year 2022, but current “probable” additional supply will cover less than half that.

Copper Fox raised over $4 million in financing from an insider in September, and that will be used to complete the Schaft Creek feasibility study and cover general operating expenses. In addition, it plans to raise up to $4 million in a private share placement in part to fund costs associated with the acquisition of the Sombrero Butte and Van Dyke copper projects in Arizona.

Copper Fox Metals was up 1.7 percent at $1.21 on Thursday, staying above the 200-day moving average that it broke through last week.

Calibre Mining (TSXV:CXB) also had a good month. The shares are up 54 percent since the beginning of September on a slew of news from its projects in the Mining Triangle in Northeastern Nicaragua. CEO Greg Smith said last week that in addition to increasing the Borosi concessions’ inferred resources to over 1 million ounces of gold and 8.4 million ounces of silver, the company has been “highly successful in discovering and expanding the mineralized footprint.”

The company also said earlier in September that its joint venture partner, Alder Resources (TSXV:ALR), had “excellent” drill results at its Bambana project, as well as a “well mineralized intercept” that shows 10 meters grading 1.42 percent copper, 0.18 grams of gold per tonne and 20.45 grams of silver per tonne at its Rosita project. Alder is currently carrying out geologic mapping and soil sampling at the Bambana project and at the El Rastro prospect, Calibre said. “These targets represent significant potential upside.”

Calibre Mining was unchanged at $0.185 after having gained 12 percent Wednesday.

Meanwhile, Pacific Booker Minerals’ (TSXV:BKM) proposed copper and gold mine at Morrison Lake was rejected by the provincial BC government on concerns that the project could endanger salmon in the Skeena River. Before the rejection, Pacific Booker’s share had gained 71 percent so far this year to $14.95. The stock fell 67 percent after the news. The company had planned to mine the reserve’s 224.25 million tonnes over a 21-year period, starting in 2013.

That was only the second time that a mine has been rejected in the history of BC environmental review. Last year, the provincial government approved Taseko Mines’ (TSX:TKO,AMEX:TGB) larger Prosperity gold-copper project, which was then rejected by the federal government. The BC government has faced pressure to take a hard stance on environmental issues, The Canadian Press reported. “I hear our critics talking about how our environmental process approves everything and that’s just simply not true,” Premier Christy Clark said.

Gregory Anderson, Pacific Booker Minerals’ CEO, said the company is considering “all available options,” noting that the federal government still hasn’t made its decision. He said the environmental assessment concluded there would be no significant adverse effects from the mine. Nevertheless, Derek Sturko, executive director of the Environmental Assessment Office, recommended the company not be issued a certificate in case the measures to mitigate the impact on the environment should be unsuccessful.

On Thursday, Pacific Booker widened its losses for the week, trading down 11 percent to $4.05 on the Toronto Stock Exchange.

Securities Disclosure: I, Ragnhild Kjetland, hold no direct investment interest in any company mentioned in this article.

What are Silver Futures?
U3O8 Price Update: Q2 2021 in Review
LME Copper vs. COMEX Copper
What are Copper Futures?