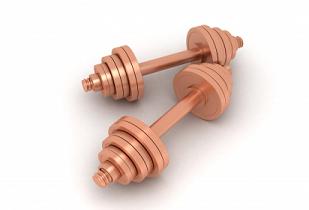 Bookings to remove copper from LME warehouses climbed to their highest level in four months. The U.S. Dollar Index, a six-currency gauge of the greenback’s strength, fell as much as 0.5 percent. A stronger dollar makes metals priced in the U.S. currency more expensive for holders of other currencies.

The U.S. dollar’s loss has been positive for the six main metals traded on the LME, with zinc advancing the most. Shortly after opening on Tuesday, LME copper for three-month delivery added 1.6 percent, to hit $6,572 per tonne. Futures for September delivery climbed 2 percent to $2.973 a pound on the COMEX in New York.

The recent rally is welcome relief for the battered metal.  After declining for three months in a row, copper has already gained 0.9 percent since July’s start.  According to both analysts and copper producers, dwindling copper supplies will boost the metal’s price, in the near future.

True, the economic threats, questions about dwindling Chinese demand and euro-zone stability are not over. However, in forecasting copper’s future price, Deutsche Bank analyst Daniel Brebner proclaimed “we believe that the market already reflects many of the concerns highlighted.” “While we believe that the copper market still faces some downward pressure, as economic conditions are likely to continue to erode, we expect that considerable buying support could emerge at the $5,500-$6,000 level,” Copper for immediate delivery will average $6,744 a tonne this year, rising to $7,714 next year, according to Brebner. That compares with an average of $7,114 so far this year.

Many of the copper mines around the globe are reaching maturity, and this means that the concentration of ores that can be mined will decrease, whereas the cost of producing ores is poised to increase. Without any significant new supply coming on the horizon, many analysts are predicting that 2011 will be a year of supply shortage.

The shrinking supply picture is not a threat that will be easily reduced. The fact of the matter is, that on a global scale, the quantity, and quality of available copper is decreasing  According to Rio Tinto Group (NYSE: RTP); the new supplies on the horizon will most likely be found deeper in the earth’s crust, and therefore will cost more to mine, driving up the price of the metal. It cost about 95 cents to extract a pound of copper from an open pit mine in 2008, compared with $1.33 from an underground mine.

Shares in Vancouver based Taseko Mines (TSX: TKO) plunged 20 percent Monday, dragged down by a federal panel’s ruling Friday that the firm’s proposed Prosperity gold and copper mine in B.C. would threaten wildlife. The mine had already been approved by the BC government, and the company will now look to approval from a federal cabinet to keep the mine alive. Taseko has already spent roughly $100 million towards the project, which will cost an estimated $800 million. The federal panel ruled that fish habitat, grizzly bears and First Nations would all be significantly affected by the mine The B.C. government earlier projected the mine would generate $600 million in revenue for various levels of government during its 20-year lifespan. In order to earn the go-ahead for the project, Taseko will have to prove to the Federal Government that the economic benefits of the mine will outweigh the environmental dangers. Taseko has secured 80 percent of the $800-million capital required to build the gold and copper project, which has one billion tons of measured and indicated resources, containing 13.3 million ounces of gold and 5.3 billion pounds of copper.