Recent VMS-related exploration success by BTU Metals Corp. (BTU – TSXV) continues to demonstrate the value of Pistol Bay’s long-standing, district-scale land position within the Confederation VMS belt, as well as the underexplored nature of the camp as being one with the potential for further discoveries.

“With the recent successes of Great Bear and BTU Metals, Pistol Bay’s extensive land position must be looked at with a new geological approach that will include looking for both VMS and gold targets. In light of our past successful drilling along the Joy corridor we will now be targeting feeder systems at depth. Pistol Bay will also be assaying for gold along the district-scale structure, which may represent a significant opportunity for our shareholders, including one that may allow for near-term assays using historic drill core,” stated Charles Desjardins, President & CEO of Pistol Bay.

The Company is also pleased to confirm that drill permits are now received and in place for two of the Company’s core gold-VMS exploration corridors, including Fredart (part of Pistol Bay’s Joy trend) and the Arrow Zone (part of Pistol Bay’s Lucky 7 trend). Recent VTEM plus™ flown over Pistol Bay’s project has outlined numerous new exploration targets, which are now in the process of being prioritized as go-forward drill targets by the Company’s geological team. Pistol Bay is also pleased to confirm that it is investigating additional geophysical techniques to deploy with the objective of delineating new deeper targets at Fredart and Arrow, both of which have experienced mostly shallow drilling and are open at depth.

The Company views it as important to note that the vast majority of VMS targets explored to-date on Pistol Bay’s project base have historically received little to no investigation for gold potential as gold was not thenrecognized as significant in the region. Recent exploration success by other public companies operating near Pistol Bay have advanced the regional context of prospective gold deposition as well as highlighted the area as a potentially significant gold-enriched VMS camp. Accordingly, Pistol Bay is currently undertaking ongoing research and planning to delineate and prioritize potential gold-bearing targets that may be affiliated with both tested and untested VMS targets. 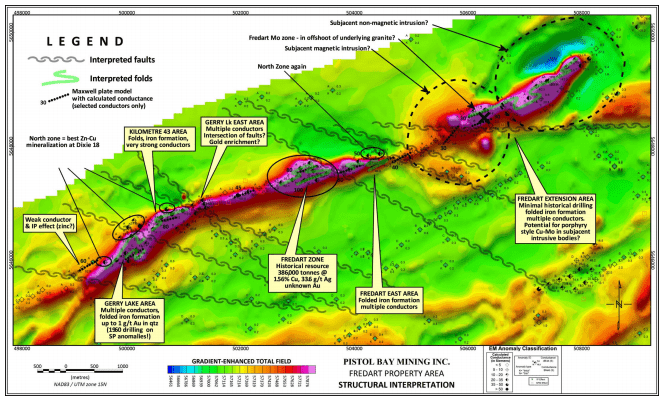 During the past year, Pistol Bay has acquired two additional land packages known as the Pakwash North and Pakwash East claims to further add to its prospective Red Lake-area holdings.

The Pakwash East block comprises of 35 cells, with an area of approximately 716 hectares (1,760 acres). It is 12.5 kilometres southeast of Great Bear Resources Dixie Ltd’s property. It adjoins a 9,650-hectare claim group registered to Great Bear Resources.

The company had also optioned out its Dixie 3 and Ben Lake claims which should provide for both additional working capital to the Company as well as near-term exploration activity.

The technical information in this news release was prepared and/or reviewed by Colin Bowdidge., P.Geo., a Qualified Person as defined in National Instrument 43-101

Pistol Bay Mining Inc. (TSXV:PST) is a diversified Junior Canadian Mineral Exploration Company with a focus on gold and base metal properties in North America, notably the Red Lake district of Ontario. For additional information please visit the Company website at www.pistolbaymininginc.com or contact Charles Desjardins at pistolbaymining@gmail.com.

Click here to connect with Pistol Bay Mining (TSXV:PST) for an Investor Presentation.