Nevada Copper Corp. is pleased to announce the identification of multiple new copper targets at its Pumpkin Hollow Project.

Nevada Copper Corp. (TSX:NCU) (“Nevada Copper” or the “Company’’) is pleased to announce the identification of multiple new copper targets at its Pumpkin Hollow Project and the intersection of shallow copper mineralization of grades up to 0.9% Cu in structural reconnaissance drill results, including indicators of a potential porphyry-style target and grab samples as high as 6.2% Cu at surface.

Matt Gili, Chief Executive Officer of Nevada Copper, stated, “Having transitioned to producer status our primary focus in the first half of 2020 will be ramping up to full commercial production, however, we will also continue advancing our regional growth strategy. Exploration results to-date have been extremely encouraging, with multiple new targets identified across our large property, and we have increased our land position significantly. Although our exploration program is at an early stage, we are very encouraged to have hit mineralization with porphyritic signatures in multiple holes.”

Gili added, “Our exploration approach is designed to leverage our substantial organic growth profile and our strong position in the re-emerging Yerington copper district. It is pleasing to continue to see that our successes to date are in line with this strategy and we look forward to working closely with our community as we invest in the development of Yerington, Nevada.”

During the course of 2019, NCU has continued to consolidate its strong land position across the Yerington district, guided by regional geological analysis.

The Company’s land package has been increased by over 30% and now encapsulates a majority of the Eastern Yerington district – a re-emerging US copper camp.

As previously announced, Nevada Copper has now completed construction of the only mineral processing facility in the Yerington district, and is permitted for production of up to 70,000 tpd. 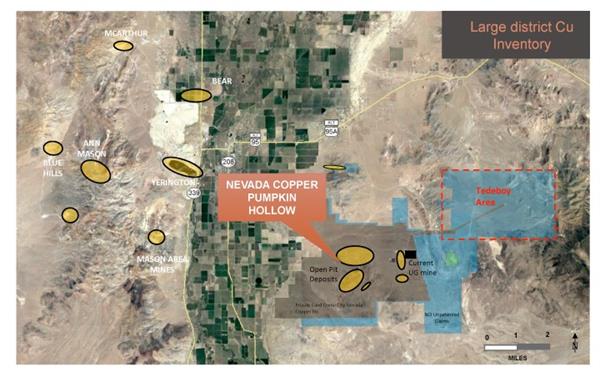 The Company has identified multiple copper targets on its expanded land package including high-grade, near-surface skarn mineralization in multiple locations and, significantly, copper mineralization with porphyritic signatures in a previously untested area. 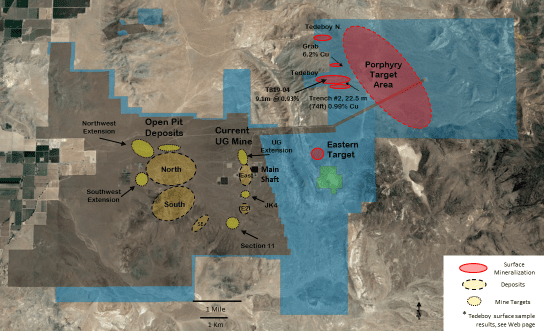 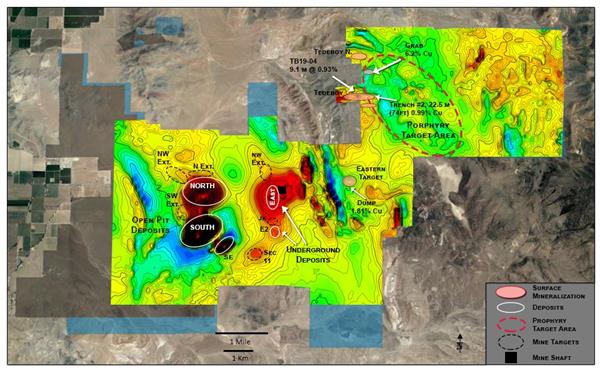 The Tedeboy surface sample summary can be viewed here on the Nevada Copper website.

This initial drilling and was not optimized for identifying widths and grade or potential resources, and the results are highly encouraging and will be followed-up in the coming months with targeted drilling on various identified structures and areas of interest to aid interpretation.

The new area is typified by a low-lying basin area with ground cover, shielding the deeper targets. Figure 3 shows the recently completed drone magnetic survey that provides target detail on the new ground as well as around the existing deposits. The new area is encircled by multiple copper and gold occurrences.

These results are consistent with the thesis that the Pumpkin Hollow skarns that form the basis for the underground mine and open pit project are associated with a porphyry feeder zone and hence this exploration work provides clear direction for porphyry target generation and future drilling.

As part of a broader reconnaissance program in the new claim areas, a seven hole shallow handful of holes was drilled that intersected copper mineralization, including 0.93% Cu over 9.1 meters. The seven shallow holes totaled 937m.

The analytical work was performed by American Assay Labs (AAL) located in Sparks, Nevada. AAL is an ISO/IEC 17025 accredited laboratory. RC drill samples were crushed so that >80% passes 10 mesh, followed by pulverizing of a 1000 gram split to >90% passes 75 < 150 mesh. Prepared samples were run using a three acid digestion process and conventional ICP-AES analysis. Gold determination was via standard atomic absorption (AA) finish 30 gram fire-assay (FA) analysis. Blank, standard and duplicate samples were routinely inserted and monitored for quality assurance and quality control. Nevada Copper detected no significant QA/QC issues during review of the data and is not aware of any drilling, sampling, recovery or other factors that could materially affect the accuracy or reliability of the data referred to herein.

The information and data in this news release was reviewed by Greg French, P. Geol., VP, Head of Exploration for Nevada Copper, who is a non-independent Qualified Person within the meaning of NI 43-101.

Nevada Copper (TSX: NCU) is a copper producer and owner of the Pumpkin Hollow copper project. Located in Nevada, USA, Pumpkin Hollow has substantial reserves and resources including copper, gold and silver. Its two fully permitted projects include the high-grade Underground Mine, and a large-scale open pit project which is advancing towards feasibility status.