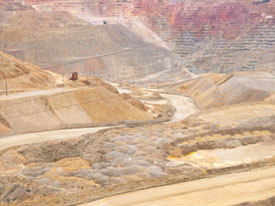 Copper prices dropped from one-month highs on Tuesday, after credit ratings firm Standard & Poor’s warned that it would be reviewing the creditworthiness of Germany, France and 13 other Eurozone members. Three-month copper on the London Metal Exchange lost $105, or 1.3 percent on the news- to close at $7,835 per tonne. In New York, the key March COMEX contract fell by $0.04 to settle at $3.5755 per lb.

The big news to hit the copper market on Tuesday, was KGHM‘s (WAR:KGHM) announcement that it would acquire Quadra FNX Mining (TSX:QUX,OTC PINK:QADMF), a Canadian copper producer with a $2.94 billion market cap. While the purchase of a copper miner by KGHM came as no surprise to market followers, the end target was unexpected. The Polish miner announced earlier this month that it was in the market to acquire a copper producer due to its cash-healthy position and its desire to expand its copper assets. Rumors circulated that the bid would be for a Canadian copper mining company with assets in South America. Speculation, however, focused on Candente Copper (TSX:DNT), a much smaller company than Quadra, with a market cap of $142.09 million.

Quadra confirmed that it had agreed to the acquisition on Tuesday. KGHM will spend about C$3 billion, plus debt to purchase Quadra. Quadra shareholders will receive C$15.00 in cash for each share tendered a 32 percent premium to Quadra’s closing price on the Toronto Stock Exchange on Monday. The deal is worth a total of about C$3.5 billion, including US$500 million in debt. KGHM intends to finance the acquisition using existing cash on hand.

The KGHM offer values Quadra at 0.83 times net asset value. A value that, according to Greg Barnes, a Toronto- based analyst at TD Newcrest Inc., which is low compared to recent deals. “There is room for a higher offer, in our view,” said Barnes, adding that another possible bidder is Brazilian miner, Vale (NYSE:VALE).

Lubin-based KGHM is looking for assets outside of Poland in order to cut production costs and raise output. The purchase of Quadra will boost the company’s annual production from the current 570,000 planned for 2011 by more than 100,000 tonnes starting in 2012.

With a looming supply deficit, there is a worldwide effort to boost copper production. So far this year, the macroeconomic picture has dampened copper’s demand, and therefore prices. Without the macroeconomics clouding copper, prices would have most likely witnessed an aggressive spike due to a plethora of supply disruptions. These disruptions include the falling ore grades at the world’s largest copper mine, Escondida, ongoing strikes at Freeport-McMoRan‘s (NYSE:FCX) copper operations, as well as other various weather-related disruptions.

Xstrata, the world’s fourth-largest copper miner, told reporters on Tuesday, that it has positioned itself “very well” for the looming supply deficit, and will continue to expand output. Xstrata added that its business plan to increase resources at its key projects was “on track and on schedule.” The company’s executives proclaimed that they were “better positioned,” compared to most copper miners, for the next boom, as the company used the 2008 crisis as an opportunity. Reportedly, as the markets tumbled, Xstrata got a jump start on expansion by venturing into new projects and ordering equipment.

In 2011, Xstrata copper boosted its total contained copper in its mineral resources by 10 percent to 97 million tonnes, an increase the miner says lays the foundation for its target of increasing copper output by more than 50 percent to 1.5 million tonnes per year by the end of 2014. In addition, Xstrata sees “substantial” volume growth in the second half of 2012, as well as cost savings from switching to lower-cost productions. The company is targeting a 20 percent “structural” reduction in costs from lower cost operations; it will raise copper-equivalent volumes by 50 percent by year-end 2014. Xstrata will spend an estimated $19.5 billion during 2012 to 2014 on expansion.

Securities Discolsure: I, Leia Toovey, have no equity interests in any company mentioned in this article.

Why Investors Should Care About Tesla’s Battery Day
7 Basic Copper Facts for Investors
Ways to Invest in Phosphate
What Was the Highest Price for Silver?