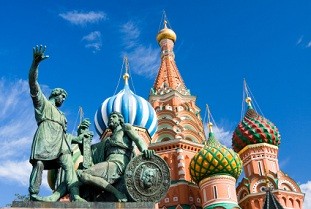 Russia is the largest country in the world. Its landmass spans from the populated areas of Western Europe, up to the inhospitable arctic.  Russia is endowed with rich mineral deposits, and produces significant amounts of platinum group metals, nickel, gold, and copper.  Russia contains 139 copper deposits, about 10 percent of the world’s copper reserves. According to the United States Geological Survey, in 2009 it ranked seventh in annual copper production.

Russia’s copper reserves are located in Siberia (70 percent) and the Urals (20 percent).  A large percentage of Russian reserves are in the remote northern and eastern regions, away from major populations and infrastructure.  While exploration was undertaken in these remote regions during the Soviet era, after the collapse enterprises in the area sharply curtailed operations.

Russia’s copper deposits vary in size and are composed of a variety of mineral types.  The copper deposits in the country include ultramafic/mafic intrusion-hosted, VMS, SEDEX, stratabound sedimentary rock-hosted, porphyry and skarn.  The well-known and large-sized copper deposits in Russia include:  the Udokan, Talnakh, Bystrinsk, Podolsk, Yubileinoe and the Volkovskoe

In addition to the inhospitable terrain, Russia has strict mining laws that limit the amount of foreign investment into its mineral reserves. On April 16, 2008, the Russian parliament passed a new Federal Law “On  Procedures for Foreign Investments in Companies of Strategic Significance for National Defense and Security” imposing restrictions on foreign investors seeking to buy shares or acquire control over Russian companies that are deemed strategic. Depending on the commodity, foreign ownership is limited to 49 percent. This restriction applies to deposits with large reserves of more than 150 metric tonnes of oil, 75 billion cubic meters of gas, 10 t of copper, and 700 t of gold; to strategic raw materials, which include diamonds, nickel, high-purity quartz, rare earths, and uranium; and to mineral deposits located near defense and military facilities and frontier areas.

The Norilsk mining center lies in the Russian High Arctic, about 2800km north east of Moscow.  Norilsk is the world’s leading nickel and palladium producer, and a significant supplier of copper. The Norilsk deposits were discovered during the 1920s, with nickel production starting during the Second World War. Underground mining began in the 1950s. The operating company was privatized by the Russian government in 1995, and is now controlled by Onexim Bank. The company also controls the Severonkel and Perchenganikel nickel mines on the Kola Peninsula, south of Murmansk, and has a significant investment holding in Stillwater Mining Co., operator of the Stillwater platinum mine in the United States. The copper-nickel-Platinum Group Metal (PGM) deposits at Norilsk lie at a depth of between 500m and 1,500m beneath a series of flood basalts and sediments. The massive sulphide orebodies are hosted within the Talnakh intrusive complex. Ores can be high-nickel or high-copper in grade, some of the direct-smelting copper ores contain up to 32 percent copper. PGMs include platinum, palladium and rhodium.

Russian Copper Company, or Russkaya Mednaya Kompaniya (RMK), was founded in 2004. It ranks third in cathode copper production and second in copper wire rod production in Russia. The company has licenses of deposits development in Russia and Kazakhstan. RMK acts in Russia (Sverdlovsk, Chelyabinsk, Orenburg, Novgorod, and Amur regions and Altai territory) and the Kazakhstan republic (Aktyubinsk region).Currently, the company’s production capacity is 200 thousand tonnes of cathode copper and up to 200 thousand tonnes of copper wire rod. By 2015, the company plans to increase of the production capacity of the Group by up to 300 thousand tonnes of copper in cathode equivalent, and up to 100 thousand tonnes of zinc in zinc concentrate. RMK is positioning itself to one day become the biggest copper concentrate supplier in the regional market.  In order to achieve this goal, the company is developing the biggest Russian porphyry copper deposits: Mikheevsky and Tominsky, and is continuing its resource expansion in Kazakhstan.

2 responses to “Copper Mining in Russia”