Carube Copper Corp. (TSXV:CUC) is pleased to report positive results from its ongoing surface exploration program at the Company’s 100% owned Main Ridge Project (“MR”) in Jamaica. Assay results have been received from the soil sampling over the eastern area of MR, which has extended the gold soil anomaly further east. A grid-based soil sampling program has extended the strike length of the coherent zone of strong gold in soils to 5,500 meters and is coincident and parallel to the trend of the Bennet Gold Zone (“BGZ”).

Mr. Stephen Hughes, CEO, commented: “Sampling east of the Former Pennants Mine has confirmed more than 5.5km of anomalous gold in soils at Main Ridge Project area. Our detailed mapping and rock sampling west of the former Pennants Mine shows gold mineralization associated with quartz, carbonate and adularia veining that is controlled by two structural trends. We will now endeavour to confirm the style and controls of the gold mineralization at eastern MR area, as the exploration development of this project continues.” 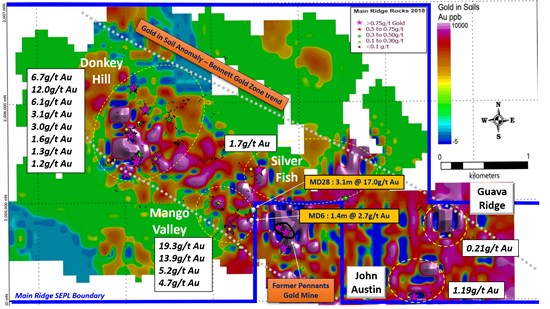 Grid soil sampling completed at eastern MR, carried out at 100 metre spacings over an area measuring 1500 meters by 1900 meters, for a total 326 samples. Soil lines are oriented in a north-south pattern due to the prominent northwest – southeast and northeast – southwest oriented structures that appear to control gold mineralization at MR. Assays were completed by ALS Canada Ltd, multi-element analysis done by 35-element aqua regia digestion with ICP-AES analysis using a 50-gram subsample, and gold was analyzed for by Fire Assay – Atomic Absorption using a 30-gram split. With respect to rock chip sampling, to date a total 468 samples have been collected and assayed from MR and a further 37 grab and channel samples were recently collected and assays are pending.

John Austin Prospect: Interpreted as a southeast extension and located approximately 1500 meters southeast of the former Pennants mine. The gold in soil anomaly occurs along trend of Pennants deposit and individual soil samples assays range from below detection to 2110ppb gold.

At John Austin geologists collected numerous rock chip samples from multiple outcrops of sheared quartz veins in faults and with associated clay-limonite-goethite alteration. Rock chip grab samples from this area assayed below detection up to 1.19g/t gold, and results are pending for the latest channel samples collected across mineralized structures. At Guava Ridge intense clay-limonite-chlorite-epidote alteration is associated with an east-west trending structural zone. Grab samples returned from below detection up to 0.21g/t Au, and results are pending for the most recent channel samples collected from this area.

Carube is encouraged by the recent discovery of five gold prospects within the Main Ridge project area, which have been defined within ten weeks of commencement of the field activities at MR. Results to date validate the exploration team’s interpretation that the gold-bearing quartz-adularia-rhodochrosite veins extend northwest and southeast of the former Pennants gold mine. The exploration team will continue mapping, sampling, and trenching west and east of the former Pennants mine. Future work will also focus on follow-up mapping and sampling to define the source of high copper in soils within the project area.

Carube Copper is focused on creating substantive long-term value for its shareholders through the discovery and development of world class copper and gold deposits. Carube currently holds a 100% interest in 11 licenses covering 535 km2 of highly prospective copper-gold terrain in Jamaica, and a 100% interest in three porphyry copper-gold properties covering 492 km2within the Cascade Magmatic Arc in southwestern British Columbia. Carube is actively searching for additional high potential copper and gold properties to add to its portfolio.

QP Statement: This press release has been reviewed and approved by Mr. Shannon Baird, P.Geo., Carube Copper’s Exploration Manager, in his capacity as a qualified person as defined under NI 43-101.

Neither the TSXV nor its Regulation Services Provider (as that term is defined in the policies of the TSXV) accepts responsibility for the adequacy or accuracy of this release.

This news release includes certain “forward-looking statements” which are not comprised of historical facts. Forward-looking statements are based on assumptions and address future events and conditions, and by their very nature involve inherent risks and uncertainties. Although these statements are based on currently available information, Carube Copper Corp. provides no assurance that actual results will meet management’s expectations. Factors which cause results to differ materially are set out in the Company’s documents filed on SEDAR. Undue reliance should not be placed on “forward looking statements”.

IMPORTANT NOTICE: Carube Copper hereby incorporates the entire disclaimer set forth on its website at http://www.carubecopper.com/uploads/1/6/5/2/16521880/disclaimers-and-forward-statements.pdf

Click here to connect with Carube Copper Corp. (TSXV:CUC) for an Investor Presentation.