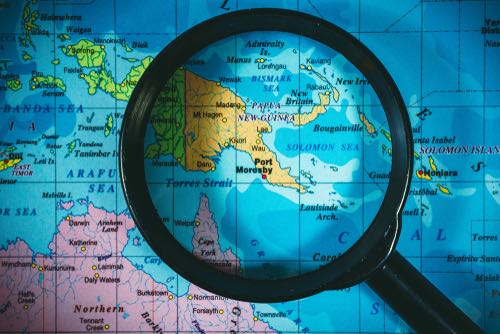 The Bougainville independence vote is coming up fast, and the mine at the center of the civil war that killed 20,000 is back in focus.

The Autonomous Region of Bougainville of Papua New Guinea in the South Pacific Ocean may seem like it’s a long way away from the concerns of the rest of the world, but an upcoming non-binding independence vote will have the world — and the resources industry— keeping a close eye on the territory.

The island region of Papua New Guinea is home to the Panguna open-cut copper mine — a mine that was at the center of a decade-long conflict that saw 20,000 Bougainvilleans killed. For its 17-year operational life, the mine supplied almost half of Papua New Guinea’s gross domestic product and was one of the largest mines in the world.

The mine has been closed since 1989 due to the conflict, which was centered around the wealth generated by the mine and the damage done to the surrounding environment. It has been slowly being reclaimed by the forest ever since, but it remains at the heart of discussions around the future of the region, which is home to a quarter of a million people.

The upcoming independence vote will be held between November 23 and December 7, giving locals two weeks to get to the polls. Results will be known by December 20.

The result of the referendum, which is widely expected to support independence over greater autonomy, the two options being presented to voters, is intended to help inform the government of Papua New Guinea in Port Moresby on the will of the local population and how to proceed with negotiations with the Autonomous Bougainville Government (ABG).

The referendum is part of a peace deal signed between Papua New Guinea and Bougainville to end their conflict. The peace deal — signed in 1998 — created the ABG.

“We expect it to deliver strong support for independence, and it could ultimately therefore lead to the formation of a new country in the region,” he said.

Parkes said that, while the vote was a big deal, it was just a first step in negotiations between the government of Papua New Guinea and the autonomous government.

“This will inevitably be a contentious process given the high stakes involved,” he said, noting that the current prime minister of Papua New Guinea, James Marape, seems more likely to respect the referendum than the previous prime minister, Peter O’Neill.

Parkes said that a result that wasn’t overwhelming or clear-cut could see a return to unrest in the autonomous region, given there was a risk that Papua New Guinea could resist losing part of its territory, and the Autonomous Bougainville Government (ABG) could declare independence anyway.

For the region at large, the creation of a new nation could pose many new challenges and opportunities, as regional powers like Australia are heavily invested in the region, and global superpower China is playing an increasingly large role in the development of infrastructure throughout the South Pacific as part of its campaign to strip away support for Taiwan.

“For Australia, the primary concern is that the referendum and the aftermath do not lead to conflict,” said Parkes.

“A security crisis in Bougainville would demand a response from Australia, which remains the vital security and development partner across the region.”

Australia and China weren’t just two powers operating near each other: Parkes said an independent Bougainville would immediately become part of a power struggle between the two countries in the region, as well as the US, which is part of the campaign against China’s influence in the South Pacific.

“Papua New Guinea is at the forefront of increasing strategic competition between Australia and China in the Pacific,” Parkes said. “The potential for a new country to emerge over the coming years would open a new front in this contest, and both Australia and China will seek to maximize their influence.”

Indeed, the Panguna mine was originally developed with Australian money — a former major owner was Rio Tinto (ASX:RIO,LSE:RIO,NYSE:RIO), which walked away from its 53.8 percent share of the operator of the mine in 2016 after giving up on efforts to restart it.

The company claiming ownership of the mine site today is Bougainville Copper (ASX:BCL,OTC Pink:BOCOF), which is listed in Australia and part owned by both the governments of Papua New Guinea and Bougainville — both of which own a 36.4 percent share each. Bougainville Copper was the operator in 1989 when the mine was shuttered.

For the last few years, the company has been sitting on Panguna while staying involved in Bougainvillean life and regularly participating in community initiatives on the island, though it has had to fight off challenges to its ownership of the mine, such as changes to the Bougainville Mining Act that would have given exploration license to another company instead. The changes were rejected.

The re-development of the mine and the shape of the region’s economy is integral to discussions around Bougainville’s future. The mine would be the backbone of an independent Bougainville economy, or a major part of Papua New Guinea’s economy if the region were to opt for greater autonomy rather than go alone.

“Despite the success of its peace process, Bougainville faces serious development challenges particularly in relation to education, health and infrastructure,” said Parkes.

“Reaching self-sufficiency would be a long-term endeavor for an independent Bougainville, and any transition to independence would require extensive international support.

“Any effort to resume large-scale mining in Bougainville would be fraught with risk given the Panguna mine’s central role in the conflict. But such is the mineral wealth on offer; it would be difficult for any government to resist the temptation.”

The mine has estimated copper and gold reserves totaling 5.3 million tonnes of copper and 19.3 million ounces of gold valued at US$58 billion as of earlier this year.

Over its operation lifetime, the mine produced 3 million tonnes of copper and 9.3 million ounces of gold.

The Bougainville government has estimated it would cost up to AU$10 billion to restart the mine, which has fallen deep into disrepair in the 20 years since it was abandoned by Rio Tinto.