Cannabis firm HEXO (NYSE:HEXO,TSX:HEXO) is coming forward with the revelation that it illegally grew cannabis in an unlicensed room in July.

After the markets closed on Friday (November 15), the Quebec-based cannabis producer informed investors that a section of one of its production facilities in Niagara, Ontario, was found to be inadequately licensed. This facility belongs to HEXO by way of its C$263 million Newstrike Brands acquisition.

Following the issue of a license for the facility in November 2018, the firm claims regulators did not indicate that a specific area, known as Block B, did not fall within the licensing segment, despite it being included as part of the original application.

HEXO states that the federal agency requested more information about that specific section of the operation, but went on to award a license for the Niagara facility.

According to HEXO, the lack of license for Block B went undiscovered in February during a facility inspection by the Canadian regulator, which failed to reveal any issues at large.

The company said it wasn’t until after the Newstrike Brands transaction closed in July that it found Block B was not fully licensed, forcing management to stop cultivation and production in the space.

“The company notified Health Canada instantly, and the regulator was satisfied with HEXO management’s corrective actions,” HEXO said in a statement, adding that cannabis from Block B was then held and scheduled for destruction.

The revelation comes after the company has suffered a variety of woes. Former CFO Michael Monahan announced his departure from the firm just five months after taking the position; this led to HEXO receiving a collection of analyst downgrades, including one from Bank of America Merrill Lynch, which changed its target to C$4 from C$9.

HEXO also withdrew its revenue outlook for 2020 in October, further driving down its value.

“While we are disappointed with what we uncovered, we assume responsibility for any issues with UP products prior to the acquisition,” said CEO Sebastien St-Louis in a statement.

This new transparency update is intended to be a proactive move on HEXO’s part, the firm said, in response to damaging “false information” being spread about the company.

St-Louis previously said the Newstrike acquisition was planned as a way to alleviate the heavy demands HEXO was facing for its products.

HEXO’s Niagara facilities aren’t currently in operation after the company announced in October it was rightsizing and eliminating 200 positions across the company. 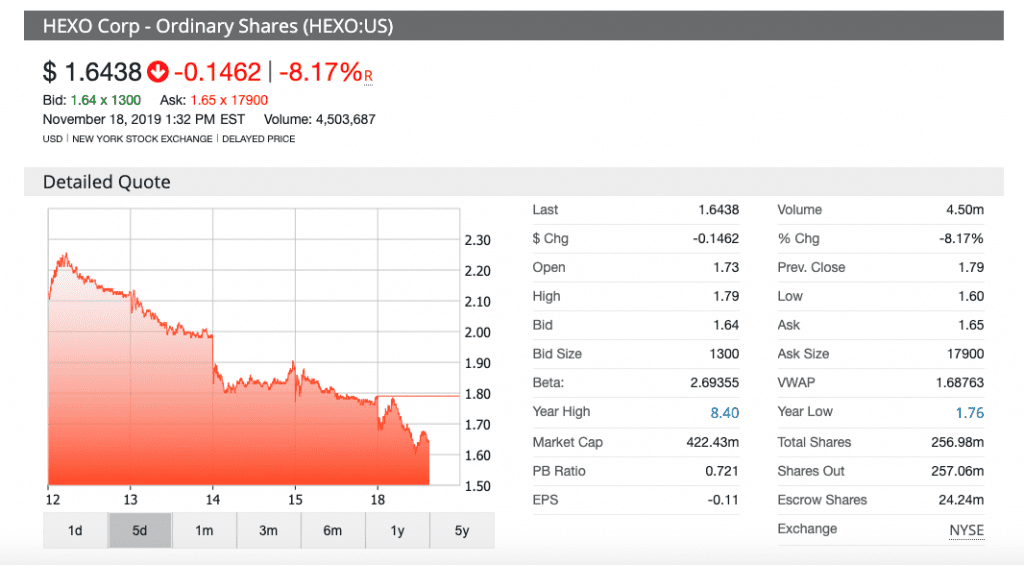 HEXO isn’t the only company in the sector to face illegal growing issues.

CannTrust Holdings (NYSE:CTST,TSX:TRST) rose to infamy in July when its facility in Pelham, Ontario, was hit with a non-compliant rating by Health Canada after an inspection revealed some of its growing rooms weren’t licensed.

Things quickly went from bad to worse once it was found that high-level executives, including former CEO Peter Aceto and former Chairman Eric Paul, knew of the illegal growing, which led to their dismissal and the subsequent suspension of the firm’s production licenses.

Since then, CannTrust has lost 78.6 percent of its value in Toronto.

While falling outside the guidelines of Health Canada may seem like the end for a producer, the regulator set a precedent by issuing a reinstatement for Winnipeg-based cannabis producer Bonify in October.

Health Canada spokesperson Eric Morrissette said in a statement that Bonify had faced contamination issues and was found to be processing and distributing cannabis product from an illegal source. The cannabis was then delivered to stores in Saskatchewan.

CannTrust similarly has placed itself on a path to attempt to regain its status as a legal producer under the approval of Health Canada. In October, the firm announced it expects to complete all the activities marked in its remediation plan by the end of Q1 2020.

“The Company has already made significant progress in this regard, and is committed to completing all of the remediation actions outlined in the plan, with input from Health Canada as appropriate,” CannTrust Chairman and Interim CEO Robert Marcovitch said in a statement.