Health Canada hands down its ruling to troubled marijuana producer CannTrust, as the company now faces a suspension on its ability to produce cannabis.

After speculation following one of the biggest scandals in the nascent Canadian marijuana industry, Ontario-based cannabis producer CannTrust Holdings (NYSE:CTST,TSX:TRST) confirmed its licenses were suspended on Tuesday (September 17).

CannTrust informed its investors the company received a notice from federal regulators for the suspension of its license earlier on Tuesday, all for its violations of the Cannabis Act. The company was originally found to have started unlicensed growing at its Pelham, Ontario, facility.

Shares of the cannabis firm in Toronto tanked by double digits after being halted by regulators at 11:32 a.m. EDT. As of 3:59 p.m. EDT, the company was valued at C$1.70 per share, representing a nearly 15 percent drop for the day.

“The notice states that Health Canada has suspended CannTrust’s authority to produce cannabis, other than cultivating and harvesting, and to sell cannabis,” the firm said in a statement.

On Wednesday’s (September 18) trading session, CannTrust bounced back in Toronto, closing the day with a 1.18 percent recovery for a price per share of C$1.72.

CannTrust will continue to cultivate and harvest existing cannabis yields and conduct ancillary activities in the market. However, the suspension will partially affect CannTrust’s license for standard cultivation and fully halt the company’s processing, medical sales and cannabis research operations.

The cannabis company told investors its license would be reinstated by Health Canada once it can prove its has fully dealt with the reasons behind the suspension.

Health Canada also suggested measures, including controlling the movement of the drug in and out of CannTrust’s facilities and making sure key personnel within the company are fully aware of the provisions of the Cannabis Act that regulate the company’s operations.

The company said its management was reviewing the notice with company counsel and other advisors.

The troubles for CannTrust started in July when its Pelham, Ontario, was found to be non-compliant by Health Canada after it was discovered cannabis was being grown in rooms that were unlicensed.

From there, the reputation of the company fell further as more information about the scandal was revealed.

Any investor value for the firm was shattered following the initial confirmation of wrongdoing. Since the first announcement from the cannabis company, its Canadian shares plummeted over 60 percent in value. 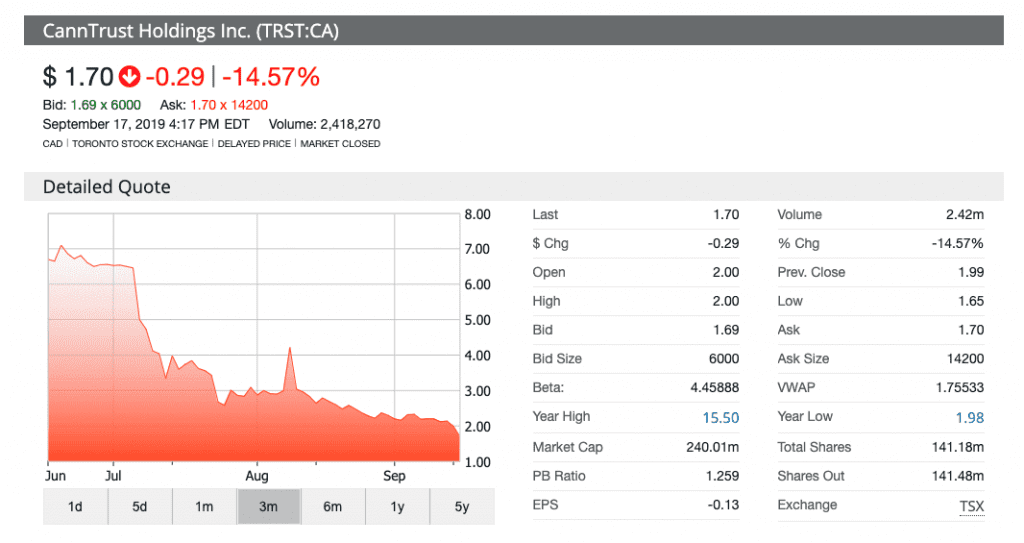 An investigation by the Globe and Mail found that high-level executives in the company, including former CEO Peter Aceto and former chairman Eric Paul, were aware of the illegal growing operations.

The discovery, and an internal review of the company, lead to Paul’s forced resignation and the firing of Aceto, who was then replaced by Robert Marcovitch as interim CEO.

In the fallout, thousands of kilograms of CannTrust cannabis were put on hold. Ontario and Alberta also pulled the company’s products from shelves, and CannTrust’s Danish partner quarantined its stock.

Ontario later returned C$2.9 million dollars worth of cannabis product from the company, saying these were “non-conforming products” and didn’t comply with its master cannabis supply agreement with CannTrust.

Cannabis Weekly Round-Up: Germany Moves Ahead on Path to Adult Use

ONGOING INVESTIGATION REMINDER: The Schall Law Firm Encourages Investors in Cronos Group Inc. with Losses of $100,000 to Contact the Firm

Investing News Network
Market News
The Schall Law Firm, a national shareholder rights litigation firm, announces that it is investigating claims on behalf of investors ofCronos Group Inc. for violations of the securities lawsThe investigation focuses on whether the Company issued false andor misleading statements andor failed to disclose information pertinent to investors. Cronos filed a Form 8-K with the SEC on November 9, 2021, disclosing that the ...

The Schall Law Firm, a national shareholder rights litigation firm, announces that it is investigating claims on behalf of investors ofCronos Group Inc. ("Cronos" or "the Company") (NASDAQ:CRON) for violations of the securities laws

The investigation focuses on whether the Company issued false and/or misleading statements and/or failed to disclose information pertinent to investors. Cronos filed a Form 8-K with the SEC on November 9, 2021, disclosing that the Company would "be required to restate its previously issued unaudited interim financial statements for the three and six months ended June 30, 2021" and that "the Company's financial statements for this period should therefore no longer be relied upon." Based on this news, shares of Cronos fell by nearly 16%.

Trulieve Cannabis Corp. (CSE: TRUL) (OTCQX: TCNNF) ("Trulieve" or "the Company"), the largest multi-state operator (MSO) in the United States today announced the publication of its first Environmental, Social, and Governance (ESG) Report (the "Report"). The Report contains standard disclosures from the Global Reporting Initiative (GRI) Sustainability Reporting Standards, The Sustainability Accounting Standards Board (SASB) as well as the United Nations Sustainable Development Goals. The Report highlights ESG achievements to date and serves as a foundation for demonstrating how the Company's ESG approach, strategies and commitments are embedded within its core business.

Investing News Network
Market News
Pomerantz LLP is investigating claims on behalf of investors of Cronos Group Inc. . Such investors are advised to contact Robert S. Willoughby at newaction@pomlaw.com or 888-476-6529, ext. 7980.The investigation concerns whether Cronos and certain of its officers andor directors have engaged in securities fraud or other unlawful business practices. [Click here for information about joining the class action] On ...

Pomerantz LLP is investigating claims on behalf of investors of Cronos Group Inc. ("Cronos" or the "Company") (NASDAQ: CRON). Such investors are advised to contact Robert S. Willoughby at newaction@pomlaw.com or 888-476-6529, ext. 7980.

The investigation concerns whether Cronos and certain of its officers and/or directors have engaged in securities fraud or other unlawful business practices.