Amid critical purchases in Nevada and California, a multi-state operator (MSO) reported total revenue of US$77 million for 2018 thanks to the expansion of its business in key states.

On Wednesday (March 20), Curaleaf Holdings (CSE:CURA,OTCQX:CURLF) informed shareholders that its year-end financials received a boost due to the company’s development in Florida and New York along with acquisitions in Massachusetts and Arizona.

The results offer a closer look at how one of the largest MSOs is expanding its reach and business scope throughout the US cannabis market.

Curaleaf posted US$31.96 million in revenue during its fiscal Q4 2018, an increase of 49 percent from its previous quarter, which the company credited to rapid development in Florida and Arizona.

During a conference call with investors and analysts, Curaleaf CEO Joseph Lusardi said Florida is one of the fastest-growing medical states. The firm currently operates 22 stores in the state.

Due to the recent lift on a ban for smokeable products, Curaleaf now expects Florida could double its market. Lusardi added that he expects to see a policy on edibles later this year as well.

The company experienced a net loss of US$61.8 million for the full year and US$16.5 million in the quarter, which the company largely credits to its use of one-time fees to reach a public listing during its most recent quarter.

Boris Jordan, executive chairman of Curaleaf, said the company now operates 42 dispensaries across the country and expects to hold 70 in its portfolio by the end of the year.

Based on the most recent results, the company is maintaining an expectation of US$400 million in revenue for 2019.

Acquisitions signal consolidation in the west for Curaleaf

On Monday (March 18), Curaleaf confirmed its plan to buy Acres Cannabis in a deal worth US$70 million, with US$25 million to be paid in cash and US$45 million in shares of the firm.

This purchase will grant Curaleaf critical assets in Nevada, including one 24-hour dispensary in Las Vegas.

An additional dispensary in Las Vegas is set to open during the second quarter, according to Curaleaf.

The MSO indicated to shareholders that all Acres dispensaries will be rebranded as Curaleaf stores by the end of the year.

“Acres operates a flagship dispensary in the heart of Las Vegas, complementing our existing assets in the state extremely well,” Lusardi said in the press release.

In February, Curaleaf also secured wholesale cannabis assets in California thanks to the US$30-million acquisition of Eureka Investment Partners.

This purchase granted Curaleaf with a production facility primed for an expansion that could produce 50,000 pounds of dry flower per year.

Similar to the Acres acquisition, the payment is split in US$10 million in cash and US$20.5 million in stock of Curaleaf.

Nevada legalized adult-use cannabis in July 2017, while California opened the doors to recreational sales in January 2018.

Both states offer vibrant markets with variety in products and dispensaries compared to other states at earlier stages of legalization.

During the update, Curaleaf indicated its focus will be on the health and wellness market for hemp-derived CBD products with an aggressive strategy placing its hemp brand in 800 CVS Health (NYSE:CVS) stores starting on Friday (March 22).

The launch is planned to be in effect for 10 states. Curaleaf confirmed that Alabama, California, Colorado, Illinois, Indiana, Kentucky, Maryland and Tennessee will be included as part of the rollout.

Lusardi said the firm has had talks with a variety of national retailers, and will be making official announcements in the near future.

“I think that, in anticipation of the farm bill last year, many retailers were trying to come to a strategy for how they were going address hemp,” the executive said.

Jordan said the company expects to see the STATES Act, a policy that would grant states the option to regulate cannabis and to allow businesses to become legal under state protection, introduced this year.

The executive indicated that the lack of a federal policy to oversee the industry has created a “significant impact” on US-based marijuana firms due to the comparisons in value with Canadian leaders.

Jordan pointed out that, despite the differences in market value for the US cannabis space compared to Canada, “the aggregate market cap of Canadian companies dwarfs that of the US.

“We believe that the US market has significantly more value yet to be realized by investors. We expect this will start to change in 2019 as differentiation from Canada will become apparent when US companies post significant financial returns with further expansion and build out,” Jordan said during the call.

Kevin Murphy, CEO of Acreage Holdings (CSE:ACRG,OTCQX:ACRG), recently told CNBC that he expects to see the bill introduced around the end of this year.

Options from MSOs in the US cannabis landscape have caught the attention of investors as the growth trend in the stock market has moved down from the Canadian space.

During an event in Vancouver, Matt Bottomley, director of equity research and cannabis analyst with Canaccord Genuity Group (TSX:CF), told investors that Curaleaf had secured his top stock recommendation of 2019.

Based on these reviews, shares of Curaleaf hold an average price target of C$16.75.

During the call, the management team of the company confirmed a voluntary lockup on 81 percent of the shares of Curaleaf by the founders of the firm and other “key shareholders.” It is set to last until October 20, 2019.

Curaleaf shares finished Wednesday’s trading session at a price of C$9.10, representing an increase of 3.29 percent for the day.

Over a year-to-date period, the stock has gained over 30 percent in value.

Better Plant Sciences Inc. (CSE:PLNT)(OTCQB:VEGGF)(FSE:YG3) (“Better Plant” or the “Company”), a wellness company that develops and sells sustainable, plant-based products that are better for health and better for the earth, is pleased to announce that it has added The Organic Grocer to its list of retail wholesalers for Jusu Wellness and Jusu Bar products. The Organic Grocer is one of Metro Vancouver’s leading independent organic grocers, providing full service industry leading expertise in health and wellness for its community with a focus on environmental and ecological consciousness 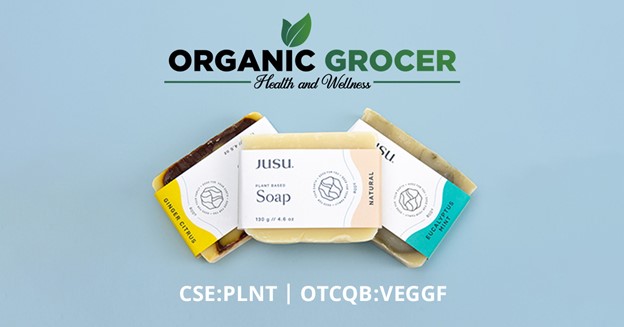 Gage Growth (CSE:GAGE) CEO Fabian Monaco talks about the company’s latest merger and acquisition partnership with TerrAscend (CSE:TER,OTCQX:TRSSF) and how its different streams of revenue are driving Gage’s exponential growth within the cannabis landscape.

“In 2021, we really hit the ground running, just like we’re going to hit 2022 running even faster. We had phenomenal growth, quarter-over-quarter growth, and we’re looking to expand quite exponentially as we approach the year 2022 in Michigan,” Monaco said.

Gage entered into a US$545 million definitive arrangement agreement with TerrAscend wherein shareholders of Gage will receive 0.3001 of a common share of TerrAscend for each Gage Share.

This CEO Interview is brought to you by:

Gage Growth (CSE GAGE) is a premier cannabis cultivator, retailer and brand in Michigan that operates on the idea that â€œgood is just not good enough.â€ Its core values of providing premium cannabis to market, positively shaping cannabis culture and nurturing the community primes the company for success and rapid economic growth.Send me an Investor Kit

The combined business will have operations in five states and in Canada, including seven cultivation and processing facilities and 23 operating dispensaries serving both medical and adult-use cannabis markets in the US and Canada.

Part of the company’s plan for expansion is to bring the phenomenal Cookies brand to Canada. It will be available exclusively in Ontario via the Ontario Cannabis Store, the largest purchaser of cannabis in the world.

“We’re going to bring the Cookies brand to Canada very, very soon. We plan on opening a retail store in Canada and be the first ever Cookies-branded retail store,” said Monaco.

MMJ Receives an Offer to Acquire Its Investment in Embark Health

Subject to a review of the Offer documentation, MMJ expects that its share of the Initial Consideration (refer below) would approximate the current book value of MMJ’s investment1.

The closed-pod system is one of the fastest-growing sectors in the vaping vertical. More specifically, in Canada closed vaping systems have a compounded annual growth rate of 25% between 2019 and 2024 and currently account for 44% of all vape-related sales in Canada as compared to 4% prior to 2019[1].

– Curaleaf Holdings, Inc. (CSE: CURA) (OTCQX: CURLF) (“Curaleaf” or the “Company”), a leading U.S. provider of consumer products in cannabis, today announced the release of Cliq by Select, a breakthrough hardware system from its Select brand designed to significantly upgrade the consumer’s vaping experience. Cliq is the culmination of years of research and development to create the perfect marriage of Select’s award-winning cannabis oil with a new, intelligently designed delivery system. This new hardware will debut at Hall of Flowers today and launch in Oregon California and Arizona next week. The hardware will then continue to roll-out nationwide in states such as Massachusetts Colorado Florida Maryland Michigan Nevada New York Connecticut Maine Utah Ohio and Pennsylvania .