Click here to watch a video of Libero's streamlined soil sampling process that helped take the Scorcher discovery from newly generated target to drilling in a single season.

"We are very excited with not only the four new targets identified this year, located kilometres to the east of the 2020 Terry discovery drill holes that have the potential to add significant scale to the project, but also with the speed the team has been capable of advancing them, while still achieving the ambitious work plan set for the 2021 drill season," comments Ian Harris , President & CEO. "A soil sampling grid was designed and carried out over the area in time to add an additional drill hole at the end of the season to test the Scorcher target. The preliminary portable XRF results from the soil grid are encouraging and consistent with the highly anomalous samples associated with the Terry discovery zone to the northwest. In addition, a detailed airborne survey was contracted and completed over the area. The new detailed magnetic survey will provide greatly improved resolution relative to our current data set and extend coverage over the new areas of mineralization east of Terry. We expect the results from the survey in early winter."

Precision GeoSurveys Inc. ("Precision") completed a helicopter borne high-resolution magnetic survey over an area of 46 km 2 surrounding the Terry target and proximal mineralization. The survey was performed with 100 metre line spacing and 1 kilometre spaced tie lines. Libero Copper's existing magnetic datasets (collected in 2017/2019) cover a larger area of the Big Red property and utilized wider line spacing (~ 500 metres). Inversions from this dataset were used in the design of the 2021 drill program advancing the Terry target. Preliminary logging of 2021 drill core suggests that the magnetic signatures could be a key vector for targeting mineralization in the system. With significantly tighter line spacing, the new magnetic survey will yield higher resolution data, and the area flown will extend coverage > 3 kilometres further east of the existing data. Once received, these data will be interpreted and used to generate and refine drill targets for the upcoming 2022 drill program. 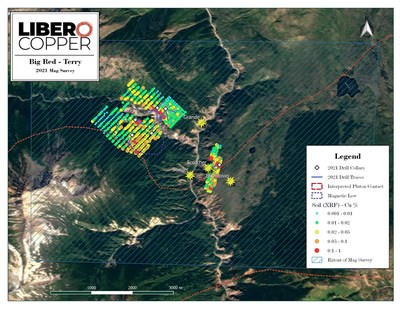 Samples from the new soil sampling grid were analyzed onsite with a portable X-ray fluorescence (pXRF) device for multiple elements (Figure 3). Quality assurance of the pXRF results was done by sending split soil samples to an accredited laboratory for confirmatory analysis. Similar to the soil grid over the Terry target, the new grid outlined a widespread and remarkably high Cu-in-soil anomaly, with numerous multi-sample anomalies in excess of 0.1% Cu, consistent with high-grade copper rock sampling identified in the new showings, e.g. Scorcher (Figure 2). The final drill hole of the season was oriented to test newly identified copper mineralization at the Scorcher discovery (a second porphyry target located 2 km southeast of Terry) and the associated overlying soil anomaly. 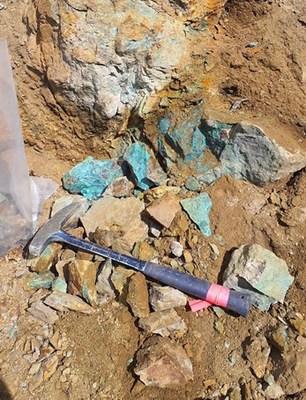 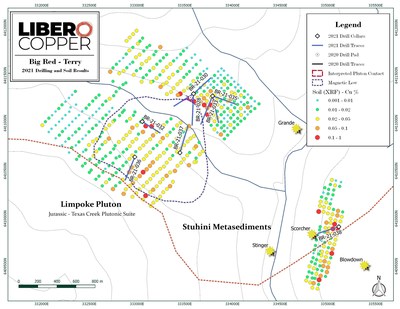 Big Red is a 26,000-hectare district scale land package with both copper and gold targets, road access, and an airstrip. Big Red is located 45 kilometres southwest of Telegraph Creek along the Barrington Road, 70 kilometres north of Galore Creek and 70 kilometres northwest of Schaft Creek in the Golden Triangle of northwestern British Columbia, Canada . The Golden Triangle is a mining district of prodigious gold and copper mineralization and host to some of Canada's most famous mines (Premier, Red Chris , Snip, Brucejack, Eskay Creek ) and porphyry copper deposits (Galore Creek, Schaft Creek, KSM, Saddle).

At Big Red, the Terry porphyry copper target is peripheral to a distinct large magnetic-high feature over the Limpoke Pluton that coincides with a radiometric potassium anomaly, magnetic low, conductivity high, copper, gold, silver, and molybdenum anomalies and a mapped Jurassic aged porphyry intrusion. The discovery hole drilled in Terry in October 2020 returned 120 metres of 0.41% copper equivalent* from surface to end of hole including 73 metres of 0.49% copper equivalent* from surface. Mineralization is associated with a porphyritic dyke swarm hosted in intermediate volcanic rocks. Chalcopyrite mineralization occurs as fine disseminations within the porphyritic dykes and volcanic host rocks, with higher concentrations along the margins. The rock textures, alteration styles and geological setting at Terry share similarities with British Columbia alkalic porphyry deposits, including Galore Creek located 70 kilometres to the south. The discovery is located just 8 km from road access at an elevation of 700 metres with relatively low snowfall.  The Big Red camp has both road access and an airstrip.

Libero is unlocking the value of a collection of porphyry copper deposits throughout the Americas in prolific and stable jurisdictions. The portfolio includes Big Red (a new grassroots discovery) and Big Bulk in the Golden Triangle, Canada ; Esperanza in San Juan, Argentina ; and Mocoa in Putumayo, Colombia . These assets are advanced by a highly disciplined and seasoned professional team with successful track records of discovery, resource development, and permitting in the Americas.

Thomas Mumford , Ph.D., P.Geo, a qualified person under National Instrument 43-101, has reviewed the technical information contained in this news release on behalf of Libero.

Valor Resources Limited (“Valor” or the “Company”) is pleased to announce the commencement of a ground geophysical survey at the Company’s Picha Project in Peru. A ground magnetic and Induced Polarisation (IP) survey has commenced with the first three lines of the IP survey completed and 70% of the ground magnetic survey completed. Preliminary results have been received for the first three lines of the IP survey which have revealed chargeabilty anomalies at depth which correlate with surface mineralisation at the Cumbre Coya, Maricate and Cobremani target areas (see Figures 1, 2 & 3 – IP lines L_7776, L_8176 & L_8576).

From wiring and plumbing to electric vehicles and electronics, base metal copper is key for a range of important applications in various industries.

In fact, the metal has earned the moniker "Dr. Copper" because its widespread use makes it a valuable indicator for global economic health. Knowing the factors that move the copper price today is therefore helpful for investors who are focused on the bigger picture.

Even though the red metal took a COVID-19-induced dive in the early spring of 2020 along with most other commodities, 2021 turned out to be a record-setting year for the copper price.

Ivanhoe Mines (TSX: IVN) (OTCQX: IVPAF) reports that the new COVID-19 variant, Omicron, has had no impact on any of its mining or mine development operations in South Africa or the Democratic Republic of Congo (DRC).

No cases of the new variant have been detected at the company's Kamoa-Kakula and Kipushi projects in the DRC and, while there have been some recent infections among employees and contractors working at the company's Platreef Project in South Africa, all people infected to date have either been asymptomatic or experienced very mild symptoms.

VIDEO — EB Tucker: Don't Get Fleeced — Know What You Want to Own, Preserve Your Wealth

How to Invest in Oil and Gas