Tempus Resources Ltd (“Tempus” or the “Company”) (ASX:TMR)(TSX.V:TMRR)(OTCQB:TMRFF) is pleased to announce that it has received the results of an alteration study and review on the Blackdome Gold Mine, highlighting its potential to host additional gold mineralisation. The study included a review of drill core photographs and data by Dr. Jeffrey Hedenquist, a world-renowned expert in epithermal gold mineralisation and deposits

Tempus President and CEO, Jason Bahnsen, commented “Blackdome Gold Mine produced approximately 230,000 ounces of gold between 1985 and 1991 at an average mill head grade of almost 22g/t. The alteration study shows that the previous drilling and mining was high up in the epithermal system, indicating there is strong potential for significant discovery of additional mineralisation directly below previously mined areas and also for new vein discoveries to the west.”

SWIR analysis on drill core improves the geologist’s ability to detect hydrous alteration minerals and parameters not visible to the eye such as compositional shifts and proxies for crystallinity, particularly in a low-sulfidation epithermal environment such as the main gold mineralising event at Blackdome. This is important in identifying the position in the epithermal system with reference to the ‘boiling zone’, which is typically the main bonanza high-grade zone of an epithermal gold system.

As discussed in the exploration update announced on 12 April 2021, drilling at Blackdome in 2020 targeted the Giant Vein, Redbird Vein, No.17 Vein and No.3 Vein. The drilling results showed textures interpreted to be higher up in the Blackdome epithermal gold system (ie, above the boiling zone). This visual interpretation has now been further supported by the alteration mineral identification from the SWIR analysis and expert input from Mrs. Lipske and Dr. Hedenquist. SWIR analysis identified the primary alteration to be a low-temperature mineral (smectite) known to develop at shallow paleo-depths over top of an epithermal gold-silver system.

Of great interest were the wide intersects of low-temperature minerals in drill holes BD-20-10, BD-20-11, and BD-20-12 (see Figure 1) followed by several meters of higher-temperature minerals (smectite-illite) at the end of the hole. Illilte forms at higher temperatures and is therefore more proximal to the hotter, ore-forming fluids. These holes were drilled well beyond the Giant Vein toward the west and are seemingly entering into a new zone where epithermal fluids may have been at the right conditions for gold-silver mineralisation north and west of the Giant vein.

The areas north and west of the Giant Vein have never been drilled. Soil sampling from 2018 identified two silver and gold trends at the southern extent of the soil grid which are coincident with airborne magnetic trends (Figure 1). Airborne geophysics flown in 2016 identified a number of lineaments which are parallel to the identified gold-silver veins at Blackdome. Tempus now considers these highly prospective targets and warrant further exploration

The previous drilling results from the No.3 Vein intersected wide zones of mineralisation with narrow high-grade gold veins, up to 28g/t gold. Quartz vein textures along with the identification of smectite also places these gold intercepts at shallow paleo-depths over top of an epithermal gold-silver system

Further review of data in the No.1 and No.2 Veins suggests these veins continue down plunge deeper than previously thought. Several drill hole intervals below mined depths of 150m below surface on the No.1 and No.2 Veins have double digit and even triple digit gold grades. Drilling below mined stopes at Blackdome is minimal and continued drilling would likely define additional gold ounces. Similar epithermal gold deposits in New Zealand typically have a vertical extent of approximately 170-300 metres which is favourable for Blackdome as the vast majority of the historically 230,000 ounces of gold was mined over a vertical interval of about ≤100 m, based on the outline of the existing stopes (figure 2).

Tempus has completed 4,500m of drilling since the program started 5 June 2021 and is currently drilling hole EZ-21-17. Drill-holes EZ-21-05 to EZ-21-14 are currently in the laboratory awaiting results. Results will be reported as they are received by the Company. 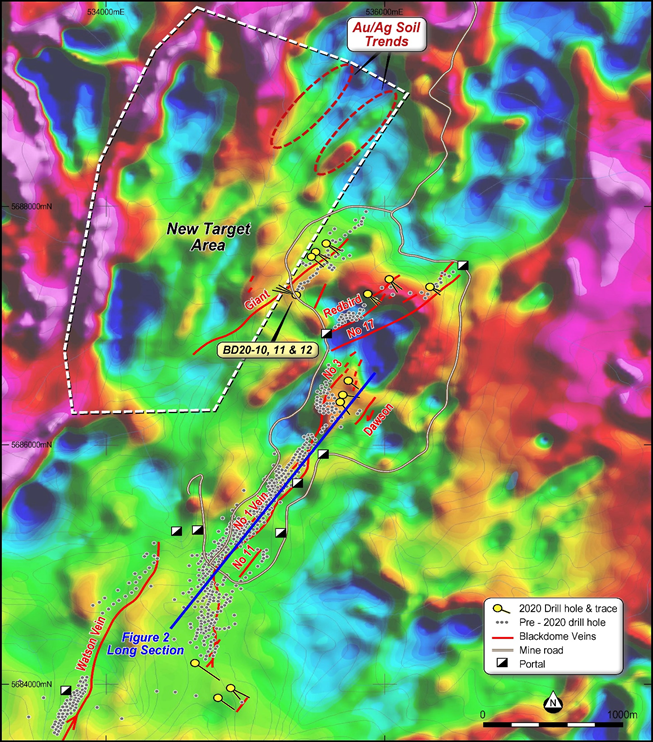 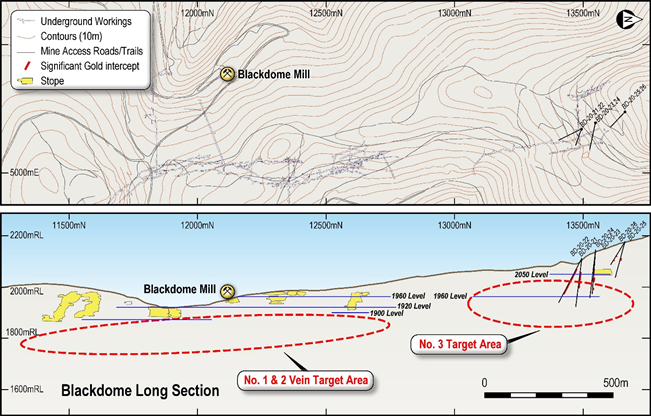 Figure 2 – Blackdome long-section imposing historic stopes along the No.1 & No.2 Veins.

This announcement has been authorised by the Board of Directors of Tempus Resources Limited.

Information in this report relating to Exploration Results is based on information reviewed by Mr. Kevin Piepgrass, who is a Member of the Association of Professional Engineers and Geoscientists of the province of BC (APEGBC), which is a recognised Professional Organisation (RPO), and an employee of Tempus Resources. Mr. Piepgrass has sufficient experience which is relevant to the style of mineralisation and type of deposit under consideration and to the activity which he is undertaking to qualify as a Competent Person as defined by the 2012 Edition of the Australasian Code for reporting of Exploration Results, Mineral Resources and Ore Reserves, and as a Qualified Person for the purposes of NI43-101. Mr. Piepgrass consents to the inclusion of the data in the form and context in which it appears.

Tempus Resources Ltd (“Tempus”) is a growth orientated gold exploration company listed on ASX (“TMR”) and TSX.V (“TMRR”) and OTCQB (“TMRFF”) stock exchanges. Tempus is actively exploring projects located in Canada and Ecuador. The flagship project for Tempus is the Blackdome-Elizabeth Project, a high grade gold past producing project located in Southern British Columbia. Tempus is currently midway through a drill program at Blackdome-Elizabeth that will form the basis of an updated NI43-101/JORC resource estimate. The second key group of projects for Tempus are the Rio Zarza and Valle del Tigre projects located in south east Ecuador. The Rio Zarza project is located adjacent to Lundin Gold’s Fruta del Norte project. The Valle del Tigre project is currently subject to a sampling program to develop anomalies identified through geophysical work.