Royalty and streaming companies have quickly emerged as a popular choice among both new and expert investors.

Investing in exploration and mining companies comes with its fair share of risk. But what if that risk was significantly mitigated?

Royalty and streaming companies have quickly emerged as a popular choice among both new and expert investors. They offer capital towards the costs to build, operate and monetize a mine in exchange for royalties on whatever the mine produces or rights to an agreed-upon amount of gold, silver or another precious metal — referred to as a “stream.”

Royalty and streaming companies offer a safe choice for investors by maintaining diversified portfolios while incurring none of the risks typically associated with mining and exploration.

This INNspired article is brought to you by:

A streaming company partners with a mining company by paying a set price upfront in exchange for receiving all or part of a mine’s future production. Payments may also be made at a later date following delivery. Royalty agreements are similar; an upfront payment earns a percentage of revenue generated from a mine. Streaming and royalty companies are not focused on mineral exploration, building mines or managing everyday operations. Instead, they provide mining companies access to funding they need to build and operate a mine. 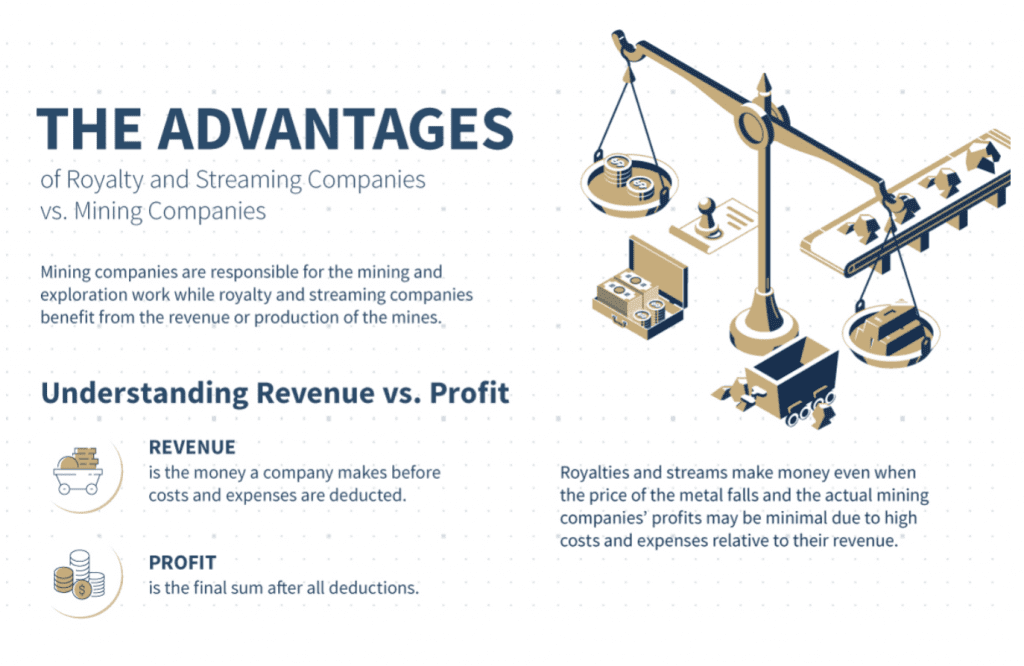 According to Fieldfisher’s Alternative Finance 2.0 report, the struggle to secure project investment led to many lower-tier mining companies sitting out on the 2017 mining boom. However, financing mine construction by issuing shares can lead to substantial dilution. A streaming or royalty agreement eliminates share dilution while offering the same exposure to metals, only without the same risk.

Traditional funding routes, such as banks, are challenging because of high costs and the mining industry’s unpredictability. Indeed, while many junior explorers fail within the first five years, streaming companies benefit from a diverse range of streaming arrangements, reducing risk while maximizing potential returns. Lastly, while debt financing is prone to delays, the average streaming deal takes between four and six weeks to be completed.

Over the past decade, royalty and streaming finance companies have received considerable attention. Anglo Pacific Group (TSX:APY) secured a US$15 million royalty into Hummingbird’s (LSE:HUM) Dugbe 1 project. Another major player in the space is Empress Royalty (TSXV:EMPR), which is currently evaluating over US$75 million of potential investments.

There are different types of royalties. Metal royalty companies operate by providing non-dilutive capital in return for a percentage of revenue generated from the company’s mining operations. The mining company retains complete control over operations and management. While royalties tend to be less dilutive than traditional equity financing and carry low issuing costs, payment obligations are contingent on production.

Royalties can be calculated in a number of ways. For example, a Gross Proceeds Royalty (GPR) is a percentage of total revenue generated from a mine. However, most mining royalty agreements are based on Net Smelter Royalty (NSR) or Net Profit Interest (NPI). An NSR refers to revenue generated once production and refining costs have been deducted, while NPI refers to profits made after capital and production costs have been paid. Because NSRs don’t include capital or operating costs, payments can be made before the mine becomes profitable. In contrast, NPIs can only be paid out once the mine becomes profitable.

Streaming companies operate according to a similar business model; they provide funding to mining companies in exchange for a percentage of one or more metals produced by the mine. 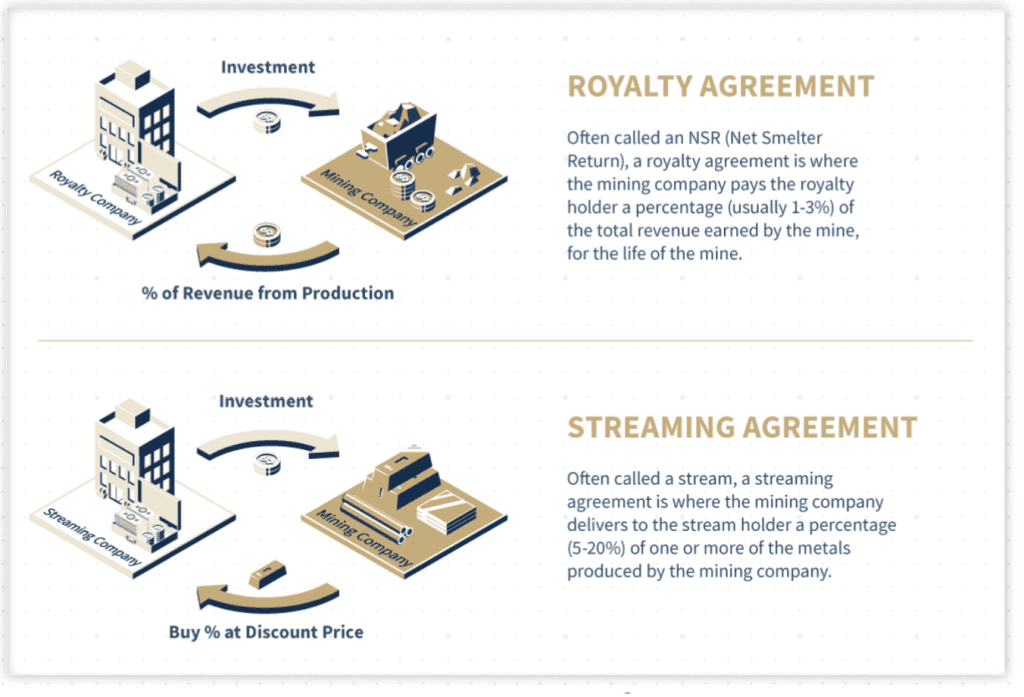 While royalties and streaming agreements are similar in essence, there are a few key differences. First, royalties are often agreed upon at an earlier stage. Additionally, streaming companies are more likely to collect a predetermined amount of physical metal rather than cash payments. While royalties are granted involving a range of precious metals and minerals, streaming agreements tend to focus on silver and gold. Finally, while tax obligations vary by jurisdiction, in many countries streaming payments are only taxed once reserves become available.

Royalty and streaming companies benefit from diversification, wide margins and reduced risk. Because of the industry’s unpredictability, streaming companies invest in a range of projects at various stages — from exploration to development to production — to minimize losses in the event of production delays or limited revenue. 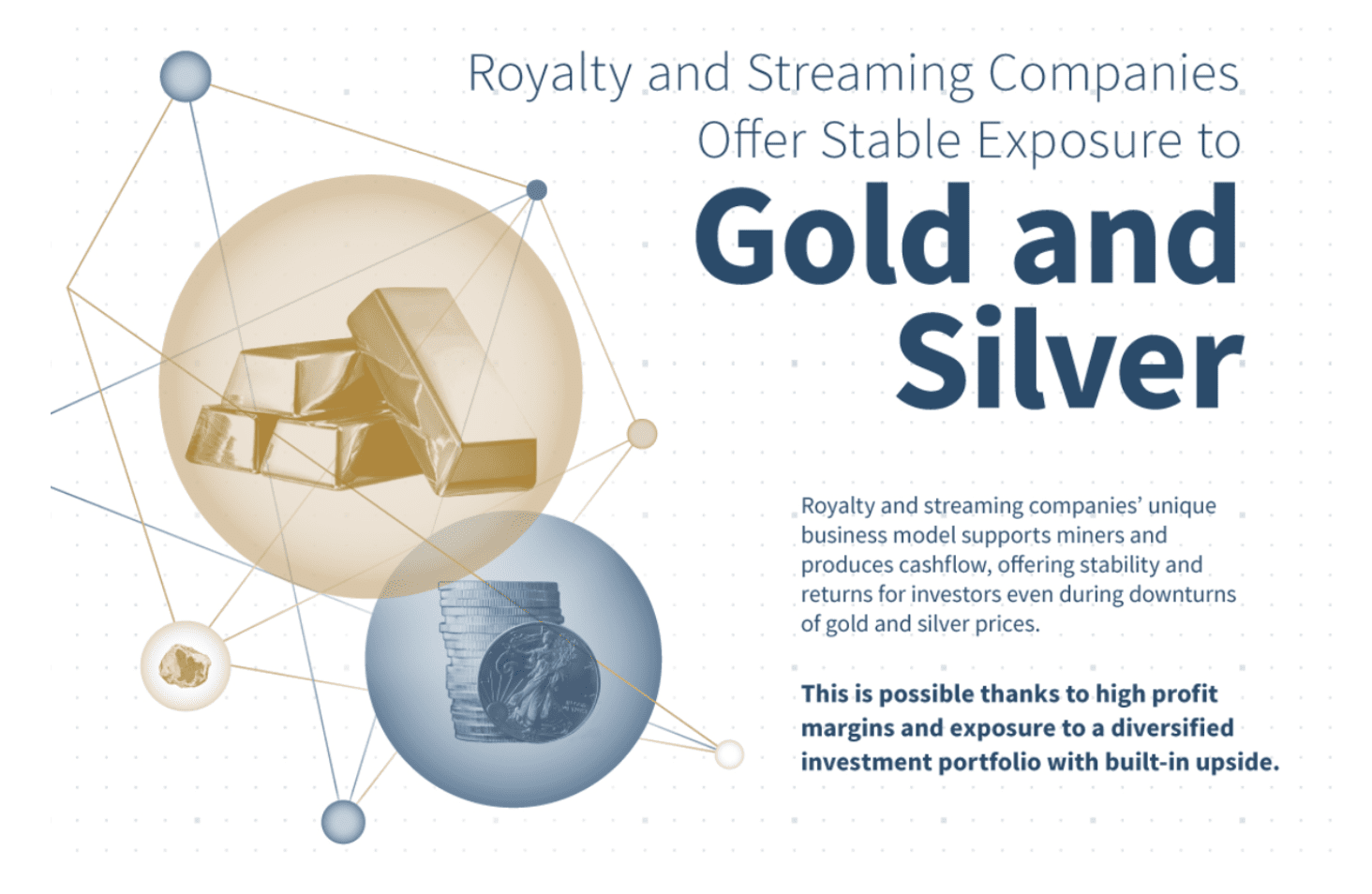 The information contained here is for information purposes only and is not to be construed as an offer or solicitation for the sale or purchase of securities. Readers should conduct their own research for all information publicly available concerning the company. Prior to making any investment decision, it is recommended that readers consult directly with Empress Royalty and seek advice from a qualified investment advisor.